Andrew Yang’s presidential bid has been receiving a lot of attention for his universal basic income (UBI) proposal. Called the Freedom Dividend, it would provide every American citizen over the age of 18 $1,000 every month for the rest of their lives. No strings attached.

Yang argues his proposal offers a slew of benefits: it will grow the economy, uplift people from poverty, enhance economic wellbeing, and offset the devastation automation will soon wreak on the workforce. He points to the Alaska Permanent Fund and other UBI studies to suggest the efficacy of such a policy.

Despite the attention heaped upon it, a UBI is only part of a detailed and comprehensive philosophy motivating Yang’s politics. Dubbed “human-centered capitalism,” if adopted, it could dramatically shift the way the United States government views its relationship to the American people and their economy 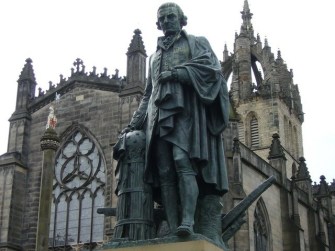 A statue of Adam Smith in Edinburgh’s High Street. His The Wealth of Nations challenged mercantilism and ushered in industrial capitalism. Are we due for another update to capitalism? (Photo: Kim Traynor/Wikimedia Commons)

What is human-centered capitalism?

In his book The War on Normal People, Yang defines human-centered capitalism as an update to or the next stage of classical capitalism. Contemporary American culture, Yang argues, imagines capitalism as a natural fit for the human condition, especially when compared to the centralized mechanisms of socialism. In turn, our culture tends to view the two as binary, almost Manichaean, opposites.

But these cultural arguments often miss some important points, including: Capitalism is not natural, and Western societies have experimented with many economic systems; there has never been a pure, laissez-faire capitalist system; and our form of corporate capitalism is but one of many.

Human-centered capitalism is Yang’s answer to the problems plaguing our current form — one that sees the human experience, not institutions, corporations, or GDP growth, as the measure of economic success.

This economic philosophy follows three core tenets. They are:

“Our economic system must shift to focus on bettering the lot of the average person,” Yang writes. “Capitalism has to be made to serve human ends and goals, rather than have our humanity subverted to serve the marketplace. We shape the system. We own it, not the other way around.”

Any talk of the economy today focuses almost exclusively on employment figures and GDP growth, metrics that undervalue or ignore many endeavors vital to human flourishing. Yang wants to shift that discussion to metrics like standards of living, childhood success, civic engagement, health and life expectancy, efficient resource use, and artistic vibrancy. Human-centered capitalism would make these measures the benchmarks of our economic success.

Turning coal miners into coders is not the answer to automation

The Freedom Dividend is the keystone to Yang’s platform. When asked at the NBC News Democratic Presidential Debate what one policy he wanted to achieve more than any other, he answered the UBI. However, it is not the only human-centered policy he proposes.

But many directly speak toward the philosophy of human-centered capitalism. To name a few:

Combating climate change. Climate change will devastate our economies, environment, and wellbeing. To counter its effects, Yang proposes regulating fossil fuels, investing in renewable energy, instituting a carbon tax, and preserving natural resources such as our public lands and waters.

Reforming the justice system.More Americans live behind bars than live in many of our major cities. Prison populations come almost exclusively from society’s lowest rungs, an inequality that is often invisible since prisoners do not appear in most measures of poverty or unemployment. Yang proposes reviewing current mandatory minimum laws, shifting drug policy toward treatment, ending for-profit prisons, and decreasing pre-trial cash bail.

Reducing the money in politics. Give Americans $100 a year to support their political candidates of choice. No more, no less. Yang’s “Democracy Dollars” would aim to diminish the disproportional effect the wealthy have on our political system. He points to Seattle’s democracy vouchers program as a potential model.

Scaling back the war on drugs. Yang believes it’s time to federally legalize marijuana. Ten states have already legalized the drug recreationally, and none has become a Mad Max-style wasteland as a result. He also wants to decriminalize the possession and use of opioids to encourage citizens to seek treatment without fear of jailtime.

Better education and health for all. Yang supports both Medicare for all and universal preschool. He also wants to increase teacher salaries to incentivize educational improvements and to better control the cost of prescription drugs.

“What is required is a new, invigorated government willing to build for the long term,” Yang writes. “We are in a slow-moving crisis that is about to speed up. It requires drastic intervention. Human capitalism will reshape the way that we measure value and progress, and help us redefine why we do what we do.” 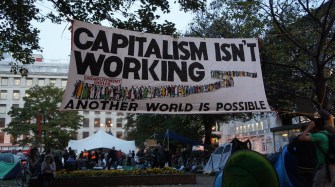 ​Reconsidering and recontextualizing capitalism for the 21st century is gaining traction across Western democracies. Some call it purposeful capitalism, others wellbeing capitalism. Ironically enough, some even call it socialism.

In the United States, for example, the Green New Deal looks to do more than combat climate change. It aims to completely re-balance capitalistic and democratic norms. Some of its ambitions include universal health care, universal basic income, a right to affordable housing, abolishing the Electoral College, and breaking up “too big to fail” banks.

Across the Pacific, New Zealand has recently unveiled its new “well-being budget.” The budget sets humanist priorities for governmental spending. These include improving mental health, reducing child poverty, and developing a sustainable economy. Other countries measure citizen wellbeing to influence policy, such as Bhutan with its Gross National Happiness index.

As New Zealand Prime Minister Jacinda Ardern told the World Economic Forum’s 2019 meeting in Davos: “This is how we bring meaning and results for the people who vote for us. It’s not ideological either. It’s about finally saying this how [sic] we meet expectations and try and build trust back into our institutions again, no matter where we are in the world.”

If elected, will all of Yang’s human-centered capitalism policy proposals come to pass? No. Even in less polarized times, the proposals are too sweeping. Even so, Yang’s popularity, especially with the online community, shows a desire to upgrade capitalism to meet the challenges of the new century.

Whatever moniker it goes by, human-centered capitalism is trending.

Hindsight is 20/20, particularly when you have had 20 years to think about what happened.
Up Next
Neuropsych

Want to have better sex? Talk about ‘it’ with your partner more, say Texas researchers