Millennials are defined by their diversity, but like every generation, they have experiences and milestones they all share.

In their formative years, millennials witnessed the rise of the internet, protracted wars in the Middle East, and a burgeoning political polarization. They ignited the experience economy and shifted the values of American culture. They are more educated than previous generations, yet stumbled into the workforce among the financial gyre of the Great Recession.

That last one has had a profound impact on the shared millennial experience. While the broader economy has convalesced, and Gen Xers have recovered the wealth they lost, millennials continue to lag behind previous generations, unable to find purchase in the financial system that made their parents and grandparents among the most well-off generations in history.

According to a New America report, The Emerging Millennial Wealth Gap, millennials currently earn 20 percent less than boomers at the same stage of life. In fact, millennial wealth accumulation is on track to fall short of their parents’ lot. And this imbalance may impair subsequent generations, too.

The Great Recession catalyzed the millennials’ poor financial state. Just as the generation entered the workforce, businesses began downsizing, income wages nosedived, and millennials had to compete against an established workforce for fewer jobs. Since then, wage growth has been sluggish and recovery uneven.

But as the New America report illustrates, the recession is hardly the only factor at play. As is often the case, it’s a nuance issue with many contributing influences.

For example, millennials are the most educated generation (for now). They have received more bachelor’s degrees than previous generations, but that education has come at a cost. American tuition fees have increased faster than wages, with the average annual cost for attending a public four-year university at just over $19,000 (2015-16). At $1.5 trillion, today’s student debt has surpassed loans for cars and credit cards, stymieing those who hold it from putting that money toward asset accumulation.

Between student debt, car loans, and credit card debt, millennials maintain a higher debt-to-income-and-asset ratio than previous generations at the same age. Importantly, this debt is less mortgage debt and more consumer debt. The difference being that the former later becomes an asset value, while the latter does not.

Add to this debt sluggish wages and volatile income from an increased reliance on gig jobs—which lacks the assurances and benefits of full employment—and the millennial balance sheet has taken a huge hit.

How bad a hit? According to the New America report:

For families headed by an individual under the age of 35, net worth was 41 percent lower in 2016 than 1995. In contrast, households headed by someone over age 75 have seen their wealth rise. The recent growth of net worth among older households has been especially pronounced. It has increased 32 percent from 2013 to 2016, reflecting new growth in the generational wealth gap.

That generational wealth gap is further aggravated along racial lines. The report cites the median net worth of non-Hispanic White households at $171,000, compared to $17,600 for black households and $20,700 for Hispanic households. The authors chose the median because the mean proved substantially higher for all race and ethnicity households, “which reflects the concentration of wealth among the wealthiest in each category.”

“Millennials are in a fundamentally different economic place than previous generations,” writes Reid Cramer, director of the Millennials Initiative at New America, in the report. “Relatively flat but volatile incomes, low savings and asset holdings, and higher consumer and student debt have weakened their finances. The Millennial balance sheet is in poor shape.” 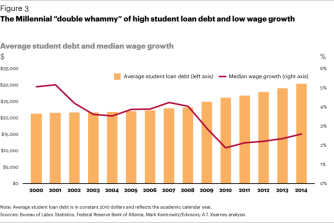 A generation feels the effects

This flagging wealth accumulation plays out in many of the stereotypes associated with millennials—stereotypes often wrongly attributed to other traits.

The trend of millennials living in their parents’ basements has become a threadbare zinger, but there is truth to it. The number of young adults returning home has risen since 1997. Rather than the result of a lazy, lost generation who can’t properly adult, the culprit is debt, stagnant wages, and the high cost of living.

Another result is the decline of millennial marriage. One study found a negative correlation between student debt and marriage. Under the financial strain, millennials less likely to embark on marriage and starting a family until much later in their lives. (Though, we should note, decade-long trends like women workforce participation and declines in teen pregnancy rates have also affect marriage rates.)

This wealth gap has also fueled the homeownership gap.

Millennials are less likely than Gen Xers and baby boomers to be homeowners, thanks to rising prices and fewer houses on the market. As the New America report notes, this single factor is perhaps the greatest detriment to millennial wealth building, as the home is often a household’s largest asset.

Inadequate wealth accumulation is not solely the problem of a single generation. Unless corrected for, it can have a cascading effect that hinders future generations, as parental wealth informs what economic resources can be invested in their children’s development.

A study out of the London School of Economics showed a strong causal link between household finances and children outcomes. It found evidence that low incomes prevent parents from investing in goods and services for their children. Additionally, these parents suffer from stress and anxiety, which can have further detrimental effects on their children. The study found that poor children are more likely to have worse education, health, and social-behavioral outcomes as a result.

The New America report also cites large bodies of research indicating that the family economic resources impact a child’s human potential and their own economic outcomes. 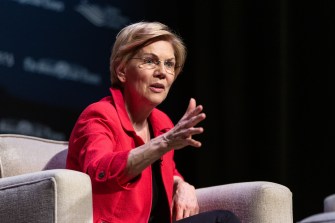 The conclusion of the New America report is that the intergenerational wealth gap must be redressed through system-wide policy changes. That’s because wealth isn’t simply luxury; it’s the “key to financial security and economic mobility.”

Those with little to no wealth accumulation cannot participate in the economy or society at the same level as their wealthy peers. They lack the tools and resources to reach their full potential, they cannot exercise or defend their rights as effectively, and in some ways basic needs become more expensive when they can be acquired.

The report’s researchers cite eight potential responses to repair the millennial balance sheet, as well as examples of what those policies may look like:

Remove taxes for savings account interest up to a certain amount. Offer bonuses or matches on saved amounts.

Incentivize savings through a government match program. Develop a public-option savings plan for people without an employer option.

4) Increase the supply of affordable rental housing while promoting paths to sustainable homeownership.

Pass laws to increase oversight over the mortgage market. Draft support systems to help people save for down payments.

5) Invest in the next generation’s asset development

A government plan that provides every child with a savings account and seed deposit. State-based 529 college savings plans with progressive matching features.

6) Address the rising cost of college and reduce reliance on student loans.

These are a few of the ideas offered by the report. But as Reid Cramer points out, the broad idea is to reinforce the pillars of our society to support everyone.

“In order to fashion a policy response to the emerging millennial wealth gap, it is instructive to acknowledge the pillars that historically have anchored the ladder of economic opportunity,” Cramer writes. “For some, these pillars were never there at all; for others, they have weakened in the years since the Great Recession.”

Unreasonable burdens prevent people from thriving. Eliminate them.
Up Next
Think Again Podcasts

Yancey Strickler (Kickstarter co-founder) – you, me, us: now and in the future

Having helped transform how creative work is financed, Yancey Strickler has moved on from Kickstarter, the company he co-founded toward a kind of values reset that moves us away from a narrow, unsustainable, inhumane obsession with profit at all costs.