Although nobody knows yet what the outcome of the global coronavirus crisis will look like, there is one conclusion on which everyone seems to agree: The economic fallout is going to be significant. Last week, the U.S. government signed off on a $2 trillion relief bill, and governments around the world are printing money in an attempt to stave off a pending financial crisis.

No cryptocurrency has ever gone through a full economic cycle. Bitcoin was born from the depths of the 2008 global financial crisis. Famously, Bitcoin’s genesis block contains the headline from The Times on the date that creator Satoshi Nakamoto mined the first ever Bitcoin: “Chancellor on brink of second bailout for banks.”

So, until now, despite rampant speculation, it’s been difficult to predict what might happen to cryptocurrencies when the economy takes a nosedive. However, the last couple of months, as the coronavirus has unfolded, have given us an idea of a few significant trends.

The idea of Bitcoin as “digital gold” has been around for a while. It’s true that the two assets share some similarities: a price driven by the forces of supply and demand and limitations on supply, for example. However, whether or not investors would treat Bitcoin as a “safe haven” investment during times of turmoil in the stock market hadn’t been proven.

On March 12, as the global stock markets plummeted and circuit breakers halted trading on the NYSE, the price of cryptocurrencies also took a nosedive. Bitcoin lost more than 40% of its value – the biggest single-day percentage drop in price since 2013.

However, on that day, gold held its price. Critics were quick to point out that the “digital gold” theory had been debunked, but perhaps they were a little too quick. Over the days that followed, gold recorded its sharpest drop in a single week, losing around 12% of its price.

Since then, the price of both assets has recovered somewhat, although Bitcoin to a lesser extent than gold, after recording a more significant decrease. Nevertheless, according to data aggregator Skew, Bitcoin and gold are showing record correlation levels of more than 50%, perhaps demonstrating that in times of economic uncertainty, the concept of Bitcoin as digital gold is more accurate than it initially seemed. 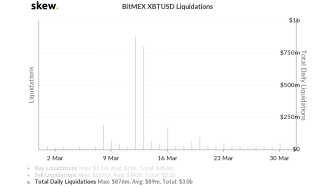 March 12 was a pivotal moment on the cryptocurrency markets across derivatives, too. Before the coronavirus started to take hold, Bitcoin futures had been enjoying something of a moment. According to Skew, total open interest had more than doubled from around $2.2 billion in November 2019, to $5 billion in mid-February.

On March 12 and 13, as the price of Bitcoin dropped precipitously, crypto exchanges liquidated millions of dollars’ worth of long positions.

Market leader BitMEX came under particular fire, as it had experienced two 25-minute outages meaning traders had no access to their accounts to top up margin or take any actions to hedge their positions. Traders on BitMEX saw over $1.5 billion of positions liquidated in the space of two days. 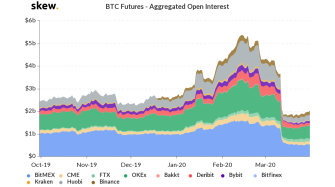 This drop illustrates the extent of investor panic, withdrawing from speculating even with short positions. It will be intriguing to see how quickly the crypto derivatives markets recover from this blow over the coming months, given that 2019 was a period of massive growth in these markets.

Stablecoins were another asset class that was burgeoning before panic surrounding COVID-19 took hold. Because they’re pegged to fiat currencies such as the USD, stablecoins had become the go-to currencies for traders entering and exiting positions. In 2019, the most popular stablecoin, Tether (USDT), had doubled its market cap from $2 billion to $4 billion, and overtaken Bitcoin as the most traded cryptocurrency.

During the market turmoil in March, while the rest of the market tanked, Tether came out smelling of roses. The market cap of USDT gained a further $1.5 billion in the second half of March alone, as Tether Limited attempted to mint enough stablecoins to meet the demand of investors keen to convert their gains or losses to a more predictable asset. 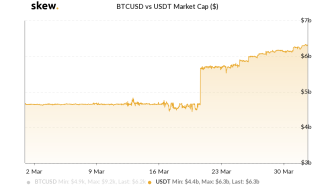 Sam Bankman-Fried, CEO of FTX Exchange and rapidly becoming something of a sage on crypto-Twitter, attributed Tether’s March explosion to a flow of OTC originating in Asia, along with investors converting their Bitcoins to Tether as a means of hedging and reducing risk.

The cryptocurrency markets are always notoriously volatile, even when the rest of the economy is sailing in smooth waters.

However, the events in March have provided a flavor of what we can expect from the crypto markets once the traditional markets experience tumult. Whether these trends continue to play out as the coronavirus bites harder, remains to be seen.

Your emotional brain is being manipulated to shop more, but there are ways to resist.
▸
6 min
—
with
Big Think
The Present

A program in Brazil both helped and harmed. What can we learn from it?
Up Next
The Past

A new finding suggests Neanderthals were far from the big dumb brutes we make them out to be.