Cryptocurrency has existed for twelve years, and despite continued reports of its impending demise, it has seen increasingly widespread use. El Salvador is preparing to accept Bitcoin as a legal tender (and plans to mine it using power from the country’s volcanoes). Many major companies accept some kind of cryptocurrency as payment, and even communist Cuba is preparing to recognize and regulate the coins.

However, the technology and systems within which these coins operate are still quite new. Most of the discussions about the economics of the coins have been unacademic in nature and often featured on blogs. Now, more rigorous analyses are becoming available.

In an article soon to be published in the Journal of Economic Literature that summarizes the research of the last decade, an international team of researchers examines the microeconomics of Bitcoin and lays the foundation for future research. At the same time, they help make sense of something often regarded as arcane.

What is Bitcoin, exactly?

Bitcoin, the original cryptocurrency, is an entirely digital form of cash. Devised by Satoshi Nakamoto, a pseudonym for an unknown person or persons, it is based on technology that dates back to at least the 1990s. Those who hold Bitcoins can engage in business transactions with people all over the world with no third party involvement and with a high degree of anonymity.

Bitcoin relies on blockchain technology. When a person engages in a transaction using Bitcoins, they are really sending instructions concerning that transaction to a decentralized network of ledgers. The people in charge of these ledgers, called miners, are in constant communication to keep the records consistent. As new information is added in blocks to the old records — also known as the chain — the records get longer and provide a complete view of all the transactions that have occurred across the network since it began.

For their trouble, miners are paid with transaction fees and with freshly minted Bitcoins, though only the ones who are able to do the job fastest and most accurately get the new coins. The supply of Bitcoins is capped at 21 million, the last of which is expected to be minted in 2140. This value is dictated by the code itself and not decided by coin holders.

The paper offers a few notes on how the traditional elements of economics — supply, demand, competition, and the like — all interact in this strange new market.

Lesson #1: Supply. The supply of bitcoins in the world is capped at 21 million and, currently, about 18.7 million have been mined. The production of new coins is slowed every four years or so, with the number of coins minted upon completion of a block cut in half each time.

The limited supply is one of the things that makes Bitcoin attractive to many people. Decentralization means it is unlikely that any one person or group could gain control of the ledgers or enough of the currency to manipulate its value (although this has been challenged by University of Pennsylvania professor Giovanna Massarotto).

The fixed supply and the way it is created may cause issues later, however. The authors point out that the incentive for miners to continue to process and record transactions will be extremely limited by future reductions in minting, as the profits from transaction fees alone will be much lower than those possible from both getting new coins and transaction fees. However, this is not predicted to occur for some time.

Lesson #2: Demand. On the other side of the equation is demand, and the demand for Bitcoins has shifted dramatically over the years. While early adoption was limited by technical difficulties and legal gray areas, the increasing number of uses and public awareness has increased demand.

Additionally, a growing number of items,from cars to hamburgers, can be purchased using Bitcoin. The number of places accepting them has spiked in recent years and is likely to increase alongside institutional acceptance of the currency. As the usefulness of Bitcoin increases, so does demand for them, especially when access to banking is limited.

On the downside, a large amount of the demand for the coin continues to come from speculators who buy the coin in hopes of it increasing in value. Also, a fair amount of the demand is for questionable activity. While the notion that only criminals are using Bitcoin or cryptocurrency in general is greatly exaggerated, it is real. A fifth of all transactions in Bitcoin are thought to be related to criminal activities and gambling, though these only amount to a paltry four percent of the value of all transactions.As an overall share of transcactions, the trend for illegal activity has been downward.

Overall, Bitcoin benefits from network effects — that is, it becomes more valuable as more people use it. Bitcoin still remains the foundation of much of the crypto market, which moves in tandem with it. So, Bitcoin is unlikely to disappear.

Lesson #4: On putting eggs in one basket. One of the more popular uses of Bitcoin is as a gold-like store of value over the long-run. Many fans of cryptocurrencies are passionate about protecting their wealth from inflation and see the controlled supply and decentralized nature of Bitcoin as a reason to place their money there for later.

Claims that Bitcoin may someday be valued as high as $100,000 per coin are based on this idea of the coin as “digital gold.” The authors point out that this would be the value of the coin if all the money currently invested in gold was suddenly used to purchase Bitcoin. This also means that the current price reflects the confidence people have in the coin replacing gold at some point in the future.

However, a number of studies have suggested that Bitcoin is a rather poor store of value, being subject to a fair amount of speculation and volatility and lacking the insurance other commodities have against theft or system failure. Despite this, the authors argue that the primary use of Bitcoin is speculative in nature, suggesting that some faith in the ability of the coin to hold and gain value exists.

Lesson #5: Volatility has causes, maybe. Many of the studies on the early years of Bitcoin, which concluded that the currency is a bubble, were based on the idea that the market was already mature and that all participants had the required information to make rational decisions. This is now known not to be the case. 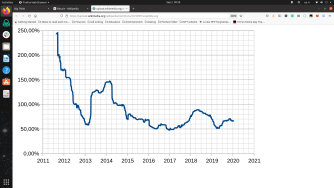 A chart showing the overall volitility of bitcoin per year over time. As you can see, while volitility remains high, it has fallen drastically since its introduction. By Ladislav Mecir – Own work, CC BY-SA 4.0, https://commons.wikimedia.org/w/index.php?curid=83137319

While Bitcoin is still subject to swings that would be eye-popping in other markets, the authors conclude that it is an asset that does not behave quite like other, more traditional ones. As a result, the volatility of its price, which has dropped over the last few years, may not be a sign of the impending collapse of the coin’s value but rather a feature of digital currencies.

Or, it may be something else entirely. It is still too new to even find much agreement on how to study the stuff. The authors say it is unclear how Bitcoin will engage with the rest of the economy, though it can be understood in traditional terms within its own markets.

Now if somebody could just explain how to get rich off of it, that would be great.

Tags
blockchaincrimecryptocurrencyeconomics
In this article
blockchaincrimecryptocurrencyeconomics
Related
The Past
How people crossed the Atlantic Ocean before commercial aviation
For centuries, the only way to travel between the Old and New World was through ships like the RMS Lusitania. Experiences varied wildly depending on your income.
The Past
How the crusades spawned the world’s first financial services company
The Knights Templar were not only skilled fighters, but also clever bankers who played a crucial role in the development of Europe’s financial systems.
The case for and against cryptocurrency
Economist Tyler Cowen says there are good reasons to be crypto-skeptical.
▸
4 min
—
with
Tyler Cowen
High Culture
From Poe to Mao: piecing together the evolution of detective stories
Detective fiction reveals how a particular society or time period looks at crime and criminal justice.
Health
Want to live longer? You may need to move
Longevity gets a new motto: location, location, location.
Up Next
Thinking
Are we born evil? St. Augustine and “original sin”
Augustine’s theology came to define Christianity, but there was a rival theology.