The value of the cryptocurrency market plummeted $42 billion following news that hackers had stolen millions of dollars’ worth of virtual coins from a South Korean exchange.

On Monday, a relatively small Seoul-based exchange called Coinrail published a post saying hackers had stolen about $37 million of Fundus X (NPXS), Aston (ATX), and Enper (NPER), all of which are known as “altcoins”, or cryptocurrencies that are valued considerably less than Bitcoin. The news seems to have spooked markets around the world, causing prices of Bitcoin of various exchanges to sink to a two-month low of about $6,650. The prices of altcoins followed suit, slashing about 10 percent off the value of many top coins.

As a cautionary measure, Coinrail moved about 70 percent of its assets to an offline “cold wallet” while the exchange and authorities investigate the heist.

“We began the investigation immediately after receiving reports from the company. It may take around a month to accurately figure out the causes,” a spokesperson at the state-run Korea Internet & Security Agency told The Korea Herald.

It’s the latest in a series of high-profile cryptocurrency heists. In January, the Japanese exchange Coincheck was hit first by hackers for more than $500 million, and then by investors with class-action lawsuits. In December, the South Korean exchange Youbit shut down and filed for bankruptcy after being hacked twice. And in 2014, years before the Bitcoin craze of late last year when new investors and widespread mania pumped the price of the flagship coin to a record $19,783.06, the world’s biggest crypto heist took place in Japan where the exchange Mt. Gox announced that about 850,000 bitcoin had vanished.

Security fears aside, other factors also have led to the three-fold correction of bitcoin prices since December. 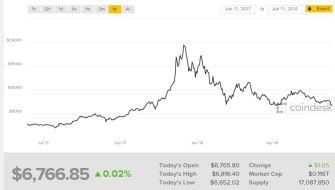 One is market manipulation. Institutional investors with millions or billions of dollars, commonly known as “whales,” seem to be taking advantage of low-liquidity markets by using massive amounts of capital to artificially raise and drop prices of cryptocurrencies. One manipulation method is “rinse and repeat,” as a user named endpoint describes it on steemit:

“…this method can be extremely profitable to a whale if timed right. The holder with a large percentage of that coins volume starts selling off lower then the market rate, which in turn causes people to start panic selling. Then the whale will watch and re-buy back in when the price of the coin reaches a new low. Then just repeats this process accumulating more wealth, more coins, and more control over that coin.”

Whales are able to get away with massive gains through these shady practices mainly because cryptocurrency markets aren’t really regulated in the U.S. and other countries. These massive swings have likely burned thousands of investors who entered the market in late 2017 when prices were on the rise.

Currently, how or whether countries are going to ramp up oversight remains an open question around the world. This state of regulatory limbo is probably contributing to bitcoin’s current slump. Regulators face one immediate problem: blockchain technology is inherently decentralized, meaning that, unlike a bank or other financial institution, there’s no one location or storage site that regulators could shut down. The government couldn’t stop bitcoin transactions even if it wanted to.

It could, however, regulate how investors convert cryptocurrencies into U.S. dollars. But even that would likely require a coordinated, global effort because a bitcoin investor could simply cash out in another country’s fiat and exchange it for dollars later.

This is all probably preventing new investors from entering the market, and it could explain why bitcoin hasn’t “taken off” like many lay investors thought it would following December’s record-breaking rally. Some think regulation could actually help bitcoin and quell the fears of prospective investors.

“If we have bad actors, it’s going to create a lack of trust in this asset class,” Neu-Ner, who is the founder of OnChain Capital and an early investor in bitcoin, told CNBC. “If we want to make this a real asset class, with real people, then let’s weed out the bad actors. But the first step is, let’s legislate first; let’s regulate first. So we know what the playing field looks like.”

On a long-term basis, bitcoin is looking strong. Although it couldn’t accomplish the herculean task of sustaining the wild price surges of late 2017, bitcoin has more than doubled in value year-over-year, and so has the total market cap of all cryptocurrencies, though, as the news from South Korea shows, that number can rise or fall by billions with one bad story.

Some astrobiologists believe life is rare, while others believe it is common in the Universe. How can we find out which view is correct?
Up Next
Politics & Current Affairs

Why are unscientific beliefs increasing among millennials?

We don’t have to stop inquiring or wondering about the far-flung vistas of reality, we just need to do it with some good old-fashioned logic.