The benefits bestowed by a college degree are well-known. Degrees open access to job opportunities and, with them, economic stability. The average earning potential of a college graduate is roughly twice that of someone with only a high school diploma. Graduates are less likely to live in poverty, more likely to be married, and more likely to be satisfied with their life and career choices. And the number of jobs that require a degree or postsecondary school training continue to increase.

Many Americans can recite this litany, yet when it comes to attaining college degrees, the United States is woefully behind its Western peers. According to the U.S. Department of Education, America was the world leader in degree attainment by young adults a generation ago. Today, it ranks thirteenth. Nearly half of students who begin college don’t finish within six years, with a quarter of low-income students dropping out by their second year.

Meanwhile, tuition continues to rise. Even after adjusting for inflation, the costs of attending a four-year public school have doubled in only three decades. Such ballooning expenses have spearheaded a $1.6 trillion student debt crisis.

For many young people looking toward a brighter future, college has become a gateway locked from the inside. As the Department of Education concluded: “Today, college remains the greatest driver of socioeconomic mobility in America, but if we don’t do more to keep it within reach for middle-class families and those striving to get into the middle class, it could have the opposite effect.”

Research has looked into the predicament and now suggests a daring, counterintuitive means of increasing degree completion among young people: We make college affordable. 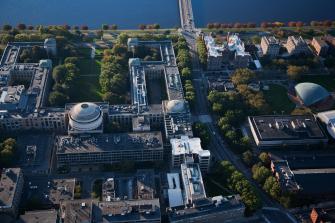 An aerial view of MIT and Harvard Bridge. The university’s School Effectiveness & Inequality Initiative partnered with the Susan Thompson Buffett Foundation for the study.Credit: Adobe Stock

The study comes from MIT’s School Effectiveness & Inequality Initiative. Its researchers wanted to determine the effect scholarships had on degree attainment. As they put it,

“Financial aid is typically motivated by a desire to increase postsecondary attainment by making college more affordable. This raises the question of whether aid meets this test by boosting educational attainment. As with any sort of award or subsidy, it’s worth considering the extent to which financial aid changes behavior. The fact that aid is motivated by the desire to increase schooling does not mean aid programs accomplish this.”

To test this question, they partnered with the Susan Thompson Buffett Foundation, an organization that offers scholarships to first-time freshman attending public colleges in Nebraska. The researchers designed a partially randomized study around the Foundation’s 2012–2016 scholarship applicants, a cohort of roughly 16,500 students seeking aid.

Because low-scoring applicants were unlikely to complete college, they were not provided a scholarship and were removed from the study. Similarly, while high-scoring applicants were awarded a scholarship, they too were removed from the study as their degree completion was likely with or without the financial abetment. This left a middle pool of applicants, each sporting a comparable level of need and college-readiness.

The Foundation awarded scholarships randomly to this middle group of applicants; those who did not receive scholarships served as the controls. Because the number of applicants far exceeded the available aid, no student was artificially denied a scholarship for the study’s sake. All told, the study included 3,699 scholarship-awarded participants and 4,491 controls. Most sought degrees at four-year colleges though some matriculated into two-year schools.

As this group was comparable in areas such as GPA, colleges attended, and expected family contributions, any statistically significant difference between the recipients and the controls would provide some evidence of a causal connection between financial aid and degree attainment.

The researchers followed the students’ college careers, from freshman year to spring 2019, and found that the scholarships did change behavior. Enrollment was only slightly higher for the aid recipients than the controls—98.7 percent compared to 96.1—but as the two groups’ college careers continued, a noticeable difference emerged in dropout rates. By the end of their fourth year, only 71.6 percent of the control group remained, a dropout rate of 24.5 percent; meanwhile, the scholarship group only declined by 18 percent.

The researchers not only found that aid promotes full-time enrollment, but that it benefitted historically underrepresented groups most, including non-white and first-generation applicants. These findings support a growing body of research that suggests college affordability directly impacts student decision-making and degree attainment.

The study, titled “Marginal Effects of Merit Aid for Low-Income Students,” is part of an ongoing research study. Additional reports will be released as the study continues.

Scholarships are one way of making college more affordable, but they are part of a much larger conversation as to what affordability means.

The ballooning cost of tuition in recent decades is another concern. Factors for this surge include a massive increase in demand, cuts in state funding, new student services, and bloated administrative compensation. While colleges could certainly rein in some of their more extravagant expenses, and legislators agree to fund more, the question of affordability goes further still.

It concerns the quality of education, whether students are dependent or independent, their resources before matriculating, what they can expect from the investment after graduation, and how much of their future income they are willing (or able) to pay. The calculus must also consider available alternatives, their costs, and their potential outcomes. It’s a multifaceted balancing act between what’s available, what students can afford, and what schools can offer with the resources they have available—which, of course, ties directly to the funds that schools have available.

In an op-ed for Higher Education Today, Susan Baum, a senior fellow in the Education Policy Program at the Urban Institute, correctly points out that a “low-cost program designed purely to train people for an occupation that is unlikely to exist in 10 years, while appearing ‘affordable,’ is not affordable at all.”

So then, how should we think about college affordability?

Baum recommends we start the conversation with need-based considerations at the forefront. “The financial resources available to a student at the time of enrollment are critical. Students have very different starting points for measuring outcomes and value depending on their circumstances,” Baum writes. But it also requires us to think beyond funding; we need to consider the resources colleges need to provide a valuable education as well as the types of experiences that students want.

If we want more students to graduate, we need to discover the right balance between moderate spending, need-based aid, and program quality, a balance that will make college accessible to all who desire to attend.

Surely they can’t be worse…can they?
Sponsored

With economic turmoil looming, everyone wants a way to keep their funds safe. But is that really possible?
Thinking

Leftover Cold War-era bunkers are still kept in a state of readiness to protect the population from nuclear war.
The Present

Airports are like mini-cities: they have places of worship, policing, hotels, fine dining, shopping, and mass transit.
Up Next
Life

Newly-discovered flower is so rare, there is only one plant of its species

Scientists find a new species of flower in a remote part of Hawaii.