Let’s face it, the other 49 states aren’t always kind to Florida. We roll our eyes at how the state horked a national election, made mothers terrified of bath salts, and plays host to python sex parties. We laugh when its citizens threaten each other with turtle armies or a major newspaper endorses a Florida congressional candidate who believes she was abducted by aliens (#onlyinflorida).

Comedian John Oliver summed up how other states feel about their southern kin best when he said: “I mean come on, Florida. You’re Florida!”

But the Sunshine State deserves more respect in the eyes of the other states. According to the U.S. News & World Report‘s 2019 Best States ranking, Florida has the best higher education system in the nation and one of the best education systems overall. 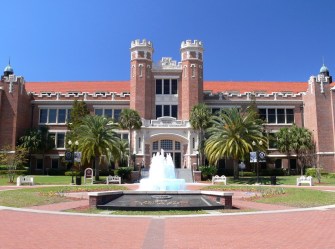 The U.S. News & World Report‘s annual ranking compares states based on eight key categories: education, health care, the economy, infrastructure, opportunity, fiscal stability, crime and corrections, and natural environment. State rankings are based on how they perform in predetermined metrics, with scores weighted on citizen priorities as determined by a survey.

As reported by the Tampa Bay Times, “the state recently announced a 9.5 percent increase in its college graduation rate over the last five years.” It has decreased the cost of pursuing a bachelor’s degree, too, reducing it to less than $10,000 after financial aid for the average student.

Under these standards, Florida has set a high bar. It beat out Washington, Wyoming, and California (which took second, third, and fourth respectively). This is the third year in a row Florida has taken the top spot, and the state sports three of the country’s 100 best colleges.

“It is no surprise that U.S. News & World Report has again named Florida the top state in the nation for higher education,” Governor Ron DeSantis said in a news release. “Our state colleges and universities have prioritized affordability and pathways for career and life and, as a result, they are transforming our state. I look forward to celebrating continued success as we build on this positive momentum.”

Rethinking college education: Put the student first, not the university

However, Florida’s sterling score did not carry over to PreK-12 education. It lingered in the middle of the pack, coming in at 27. Instead, Massachusetts ranked number one in primary and secondary education. These results were based on metrics such as preschool enrollment, SAT and ACT scores, standardized test scores in math and reading, and high school graduation rate.

To weigh its index score, U.S. News & World Report’s surveyed more than 50,000 Americans over three years. The survey asked residents in each state how they felt their governments handled key categories and where they wanted resources to be focused. The respondents had to rank each category — 1 being the most important, 8 the least.

Increased public support has likely played a part in advancing the nation’s educational systems. The national high school graduation rate is 85 percent, the highest it has ever been. Millennials have become the most education generation, earning more bachelor’s degrees than Gen X or the baby boomers.

But there’s still room for improvement. Graduation rates for whites, Asians, and Pacific Islanders continues to outdo rates for blacks, Hispanics, and Native Americans. School funding remains tied to local property taxes, meaning schools in poor districts that need money are unlikely to get it. Higher education can be prohibitively expensive. And education is still not a right in the United States, unlike other democracies.

Why Arthur Schopenhauer would have hated modern education

Many of his criticisms ring true today.
Neuropsych

The replication crisis has debunked many of psychology’s fair-haired hypotheses, but for the marshmallow test, things have only become more interesting.
Smart Skills

The creator of the index called it a public utility for accessing the “vast ocean” of human knowledge.
Up Next
Starts With A Bang

Mars and Earth, to scale, shows how much larger and more friendly to life our planet is than our red neighbor. Mars, the red planet, has no magnetic field to […]