For a while now, scientists have presented demonstrations of sound’s ability to levitate and move suspended particles. It’s pretty cool stuff, and you can find lots of amazing videos showing intriguing patterns made with acoustic waves. Now, though, mechanical engineers Asier Marzo of Spain’s Universidad Publica De Navarra and Bruce Drinkwater of the UK’s University of Bristol have published research in which they demonstrate, for the first time, the ability to independently move particles in 3D space using ultrasonic sound waves. This technology has the potential to one day offer a less-invasive and destructive alternative to the lasers current employed in surgery suites. As Drinkwater tells University of Bristol News, “Optical tweezers are a fantastic technology, but always dangerously close to killing the cells being moved. With acoustics we’re applying the same sort of forces but with way less energy associated. There’s lots of applications that require cellular manipulation and acoustic systems are perfect for them.” 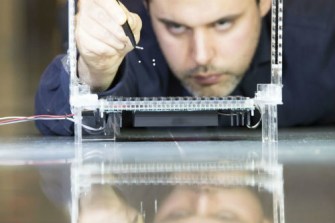 Working in the HAT array

Marzo and Drinkwater call their invention “Holographic Acoustic Tweezers” (HOT), or simply “acoustic tweezers” in conversation. The HOT acronym differentiates the method from Holographic Optical Tweezers (HAT), the laser-based technology it hopes to supplant. The technique’s medical applications do seem plausible: The scientists have already shown that they can connect polystyrene spheres with thread and use HAT to sew fabric.

Since moving polystyrene balls in the air is hardly the same as manipulating tiny objects in the body, the current breakthrough is seen as just a first step. Marzo and Drinkwater hope to demonstrate the system working in water in about a year, and from there move on to getting it going in biological tissue. Marzo says, “The flexibility of ultrasonic sound waves will allow us to operate at micrometre scales to position cells within 3D printed assemblies or living tissue. Or on a larger scale, to levitate tangible pixels that form a physical hologram in mid-air.”

Even in its current form, the HAT technology is impressive, to say the least.

“We applied a novel algorithm that controls an array of 256 small loudspeakers,” says Marzo, “and that is what allows us to create the intricate, tweezer-like, acoustic fields.” The speakers emit very high-frequency sound waves, in the 40 kHz range — human hearing is said to top out at just above 20 kHz, though there’s some debate about its upper limits.

The HAT demonstration takes place inside a box-like array with the 256 single-centimeter speakers arranged on walls opposite each other over a reflective base. The “particles” they’re moving are styrofoam balls from 1-3 millimeters in diameter, and HAT is currently capable of moving up to 25 of them at a time.

The future of HAT

Marzo describes his vision for HAT’s future, saying, “The flexibility of ultrasonic sound waves will allow us to operate at micrometer scales to position cells within 3D printed assemblies or living tissue. Or on a larger scale, to levitate tangible pixels that form a physical hologram in mid-air.” He describes another tantalizing use to Agencia Sync: “At micrometric scales,” “Marzo says, it could allow “the manipulation of 3D cells to create structures beyond a simple culture in a two-dimensional Petri dish.”

“I thought, why not direct these high-power beams, instead of into fusion plasma, down into rock and vaporize the hole?”
The Present

One home was printed in 28 hours. Now, Alquist 3D is building 200 more.
Up Next
The Future

A new study flies in the face of anecdotal evidence and raises questions about how we read data.