We don’t know what allows a science-fiction tractor beam to push a starship around, but on earth, scientists have been experimenting with forces that can similarly hold onto and propel an object by levitating it in mid-air. Magnetism can do this, as with maglev trains, but it’s limited to materials that respond to magnetism. More promising are sound-based, or acoustic, levitation devices that can lift and hold a wider assortment of tiny bits of solids, liquids, food and even bugs. Now a team at University of Bristol has come up with a way to suspend and control the movement of large objects using tractor beams produced by sonic vortices, essentially sound-wave tornadoes. The team’s research has just been published in Physical Review Letters. “Acoustic researchers had been frustrated by the size limit for years,” says research associate Asier Marzo, the study’s lead author, “so it’s satisfying to find a way to overcome it. I think it opens the door to many new applications.” 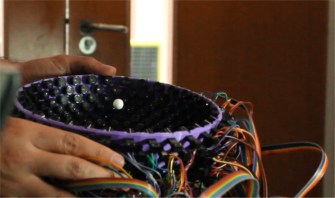 There are some very exciting potential applications, including some that are really a bit wild. While the ability to position drug capsules or manipulate tiny surgical implements inside the human body would clearly be a great step forward for medicine, acoustic tractor beams could also allow “container-less” acoustic containers to levitate super-delicate substances. Bruce Drinkwater, who supervised the research, says, “I’m particularly excited by the idea of contactless production lines where delicate objects are assembled without touching them.” Acoustic tractor beams may also, eventually, be able to levitate people using sound.

Sound waves are cyclical variations in air pressure — the shorter the cycle, the more frequently it occurs, and thus the higher its perceived pitch. The human hearing range goes from slow, low-pitched 20 Hz waves that cycle over a distance of 17 meters to short, high ones at about 20 kHz whose length is a mere 17 millimeters. Prior to this research, an acoustic tractor beam could only control objects that were less than half the size of the sound waves it used. Anything larger spun out of control due to orbital angular momentum being transferred to objects, causing them to accelerate until they flew out of the device’s control.

Counterintuitively, the Bristol team worked with very high-pitched sound waves of 40 kHz, way above the range of human hearing. This is significant not just because they’ve been able to contain objects even with such minuscule wavelengths, but also because previous acoustic levitation systems involved sound waves in the audible range and at volumes potentially damaging to human ears, making their use impractical and even dangerous. “In the future,” says Mihai Caleap, who designed the simulation, “with more acoustic power it will be possible to hold even larger objects. This was only thought to be possible using lower pitches making the experiment audible and dangerous for humans.”

The trick was that the Bristol team found they could intertwine a sequence of smaller vortices of equal shape, or helicity, but with rapidly changing chiralities, or directions, into a single time-averaged, virtual vortex spinning around a silent center, or core, in which objects can be held.

Fine control of the mini-vortices allowed them to stabilize the larger one, and they could then increase the size of the core to levitate larger objects, up to a two-centimeter polystyrene ball. That’s more than twice the size of the acoustic wavelengths they were using. 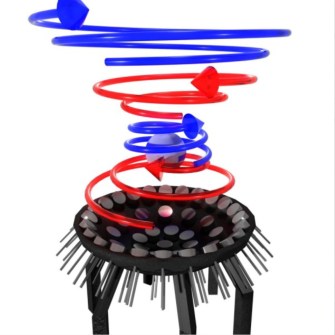 Obviously, it’s non-trivial to scale a system from a small, light ball up to human size, which would obviously require far more power. For now, though, this is a promising step forward. Or upward.

Related
The Past
How the death of alchemy gave birth to modern science
Far from practicing witchcraft, the experimentation of medieval alchemists helped bring about the Scientific Revolution.
The Well
This is what the fourth dimension looks like
Left–Right, Back–Forth, Up–Down. What’s the fourth dimension?
▸
3 min
—
with
Brian Greene
The Present
How heat pumps of the 1800s are becoming the technology of the future
Innovative thinking has done away with problems that long dogged the electric devices — and both scientists and environmentalists are excited about the possibilities.
Starts With A Bang
JWST’s hunt for most distant galaxies gets double boost
Along with gravitational lensing and ALMA’s incredible long-wavelength spectroscopy, JWST is reshaping our view of the early Universe.
Thinking
Finding your essential self: the ancient philosophy of Zhuangzi explained
Adopting a healthy scepticism towards inherited ideas means “emptying the container of the Self.”
Up Next
Technology & Innovation
10 quotes on scientific issues from 2018 political candidates
Science Debate asks 2018 candidates to discuss their views on 10 vital scientific policy issues.