There is an old joke that says “If your parachute doesn’t deploy, don’t worry: you have the rest of your life to fix it.” The findings of a new study may put that joke out of fashion, as intrepid scientists found that jumping out of a plane with a parachute didn’t lower the death rate of test subjects compared to those who jumped without one.

A leap of faith in anecdotal evidence

The study, published in the light-hearted Christmas edition of BMJ, involved 23 test subjects who were randomly sorted into two groups. One would leap out of an airplane with a parachute while the second would do the same with a regular old backpack. Their survival rates were then compared after they hit the ground. Shockingly, it was found that the rates were the same for both groups!

The authors explained that “Our groundbreaking study found no statistically significant difference in the primary outcome between the treatment and control arms. Our findings should give momentary pause to experts who advocate for routine use of parachutes for jumps from aircraft in recreational or military settings.” 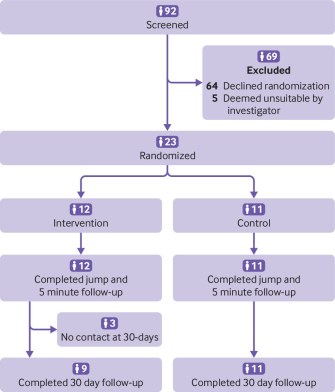 A portion of the flow chart explaining the study structure. As you can see, it follows every regulation for a randomized trial with a control group.

In order to get people to agree to take part in the study, the scientists had to structure the experiment properly. The airplane was both on the ground and stationary, as they thought it would be impossible to get people to agree to leap from a moving plane several thousand feet up without a parachute. The authors admit this was a “minor caveat” in the study’s design.

They don’t admit this until the fourth or fifth paragraph into the paper, however, which leads to their larger point.

How to detect baloney the Carl Sagan way | Michael Shermer

The authors explain that the whole study was designed to highlight the limitations of randomized trials and the dangers of not reading past the first paragraph of a study. They explain:

“The parachute trial satirically highlights some of the limitations of randomized controlled trials. Nevertheless, we believe that such trials remain the gold standard for the evaluation of most new treatments. The parachute trial does suggest, however, that their accurate interpretation requires more than a cursory reading of the abstract. Rather, interpretation requires a complete and critical appraisal of the study. In addition, our study highlights that studies evaluating devices that are already entrenched in clinical practice face the particularly difficult task of ensuring that patients with the greatest expected benefit from treatment are included during enrollment.”

While this study is funny, the questions it raises are real ones. Many influential studies in psychology have been found to be flawed because they used W.E.I.R.D test subjects or were applicable only to a limited range of situations. By clearly showing how accepted procedures can be used to create an absurd little paper, the authors remind us to look closely at the findings of any study.

Admit it, you’ve read a headline before and then pretended like you read the whole article later when you wanted to talk about it. The point of this silly study is to show just how misleading a summation of a study can be and how important context is in understanding what experiments mean. So have a laugh, and remember to always read more than the study’s abstract before you decide to take its supposed findings to heart.

Drugs that stifle acute inflammation may prevent the body from healing properly.
The Well

Basic and breath-taking – Dr. Frank Wilczek addresses symmetry’s critical role in nature’s laws and what we consider to be beautiful.
▸
with
Frank Wilczek
Health

Data from NASA, ESA, and Roscosmos suggest that long durations in space cause changes in the brain, some of which are linked to vision problems.
Up Next
Life

“This is a great example of a forest restoration plan which is both good for the people and good for nature,” one researcher said.