Though many of us get to know Petri dishes in school as containers of bacterial cultures, in a research context, they may contain any number of bioparticles, some of which are quite tiny and difficult to manipulate manually. Now researchers at Duke University have published a paper in Science Advances that introduces new contactless, high-precision prototype tools that utilize sound waves to allow scientists to manipulate objects held by fluids in Petri dishes.

The concept behind what scientists call “acoustic tweezers” is not completely new, having seen use in particle trapping and cell work. “However,” senior author Tony Jun Huang tells Phys.org, “at the end of the day, the success of this field depends on whether end users such as biologists, chemists or clinicians are willing to adopt this technology or not. This paper demonstrates a step toward a much friendlier workflow to make it easier for end users to adopt this technology.” 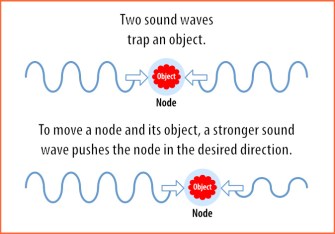 To understand how the “tweezers” work, it’s important to know that they’re tweezers only in that they grab objects so that they can be manipulated. That’s the extent of their similarity to household tweezers: Acoustic tweezers are not small hand-held devices to pinch with. They’re much more high-tech than that. Acoustic tweezers use pairs of sound waves directed at the object to be manipulated. (NASA has an excellent pair of short videos explaining how sound waves work.)

In an acoustic tweezer, sound waves directed toward each other push an object into the location at which the waves meet, called a “trapping node.” Once the object is trapped there, the node’s position can be repositioned as desired by adjusting the strength, or amplitude, of the sound waves. As the node moves, so does the object trapped within it.

Acoustic tweezers provide a touch-free, gentle and non-destructive means of holding on to and manipulating even very tiny objects — a single cell or particle, for example. Using multiple sound waves emitted from opposite each other, and above and below, objects can be moved in three dimensions. This allows scientists to mix objects together with tremendous precision and to construct two-dimensional and three-dimensional structures from trapped objects.

The researchers present three different prototypes in their paper. They all employ small piezoelectric sound transducers affixed to the edges and/or below Petri dishes. These transducers convert electrical energy into sound waves and can move objects in Petri dishes in pretty much any direction.

The primary purpose of this study was to work out how to implement already available acoustic tweezers in more compact, practical form for researchers, according to Huang.

As the paper notes: “Although previous acoustic tweezers have been demonstrated for the manipulation of cells, most of them require customized microfluidic channels/chambers, which usually require time-consuming and costly steps for fabrication and sterilization and hence are not frequently used in biological and biomedical laboratories.” The authors’ aim, says the paper, was to develop “acoustic tweezer devices that can directly manipulate bioparticles in the most common laboratory cell culture plate, the Petri dish.”

The authors’ next goal is to further catalogue the capabilities of their prototypes, in particular their configurable third design. Down the road, they hope, will be development of a device that combines all three types of functionality provided by the prototypes in a single device.

Rock study may have just revealed cause of Triassic mass extinction

Rocks from two hundred million years ago show us how everything died and how nothing is new.