Humans love puzzles. Thanks to an evolutionary skillset that lets us piece together fragments of information necessary for survival, we’ve turned biological instinct into a love for games. Sometimes our affection manifests in Candy Crush; other times, in solving uncrackable ciphers.

Numerous unbreakable codes persist. The CIA awaits the brave thinker that will crack the fourth code in its Kryptos monument. The Beale ciphers may or may not reveal $60 million in hidden treasure. Composer Edward Elgar continues to laugh from beyond the grave.

Few codes stand the test of time, however. It took nearly 600 years for researchers to realize the Voynich manuscript was effectively a rip-off copy of Women’s Health. The MIT time-lock puzzle was only 20 years old, yet it still took a nifty programmer three years to crack it. And then there’s the Zodiac Killer.

The recent news that a 51-year-old letter from the infamous Bay Area murderer, whose story was immortalized by David Fincher, has been cracked recently made headlines. While this code will bring no peace to the families of the unknown killer’s victims, the solving of this letter reminds us once again that nothing is impenetrable.

How I cracked the Zodiac Killer’s cipherwww.youtube.com

After the Zodiac Killer’s first cryptogram was quickly solved in 1969, he followed up with a 340-character puzzle that has baffled cryptographers ever since. Three men worked tirelessly on the letter and finally revealed the encoded message:

While the San Francisco branch of the FBI has acknowledged the puzzle has been solved, they’re not providing any more comments considering the case remains open.

Edgar Allan Poe’s “The Gold Bug” was based on a cipher mystery, as Poe himself was fascinated with puzzles. In 1840, he offered a free subscription to Graham’s Magazine to anyone who could stump him. He claims to have solved a hundred entries, ending the contest by publishing a challenging code written by W.B. Tyler—who many at the time suspected was a pseudonym.

It wasn’t until 2000 that a software engineer decoded the message, which opened up, “It was early spring, warm and sultry glowed the afternoon. The very breezes seemed to share the delicious languor of universal nature…”

Given the numerous typesetting mistakes, recent researchers aren’t convinced that Poe actually wrote it. The author will likely remain a mystery, but the code itself is in the books.

An entire team spanning two countries was needed to crack the 260-year-old mystery of the Copiale cipher. Unlike a few lines of prose, this 75,000-character manuscript filled 105 pages written by a group of ophthalmologists. The book was encrypted in German and relied on a complex substitution code that used symbols and letters for spaces as well as text.

Dating from the second half of the eighteenth century, the first 16 pages discuss a masonic initiation ceremony by the Oculists. The strange ritual involves initiates “reading” a blank piece of paper before being given a pair of glasses—those wily eye doctors. After their eyes are washed, the referees then pluck a single eyebrow of each recruit.

Better than college hazing, though still an odd text to keep so secretive. Then again, maybe that was the point. 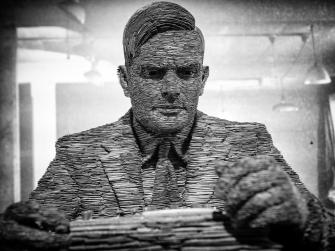 Not all codes are so playful, or strange. Some are insidious. Such is the case with the Zimmermann Telegram, a note sent from Germany to Mexico in 1917. Intended for the German ambassador to Mexico, Heinrich von Eckardt, the Germans were preparing America’s southern neighbors for battle—in the name of Germany. In exchange for weapons and funding, the Mexicans would reclaim Arizona, New Mexico, and Texas upon victory.

The cipher was cracked about a month after interception by Britain’s “Room 40.” The text read, in part:

“We make Mexico a proposal of alliance on the following basis: make war together, make peace together, generous financial support and an understanding on our part that Mexico is to reconquer the lost territory in Texas, New Mexico, and Arizona. The settlement in detail is left to you.”

Tensions between the US and Germany were already high; this message pushed America over the edge. A month later, President Wilson overruled his intention of remaining neutral and entered World War I on the side of the Allies.

One of the most famous cracks in history is certainly the Enigma Code. If the Zimmermann Telegram helped us get into World War I, the second chapter only ended in our favor thanks to Alan Turing’s unforgettable machine.

The Germans were utilizing an enciphering machine to pass messages to its Axis partners. Perhaps learning from past mistakes, they changed the entire cipher system on a daily basis.

Turing responded with his own machinery: the Bombe, Lorenz, and Universal Turing Machine. Thanks to his inventions, alongside tireless efforts by British cryptologists, the Allied forces exploited procedural flaws and operator mistakes by the Germans. The Enigma Code was cracked, saving countless Allied lives and helping turn the tide of the war.

Almost all our school improvements fail. Here’s why.
▸
with
Kathryn Paige Harden

You can learn things 250% faster by unlocking your ‘flow state.’
▸
6 min
—
with
Steven Kotler
Up Next
Health

Ultraviolet LED lights could soon be used to help disinfect air and surfaces in buildings, planes, subways and other spaces.