If you encounter the word “miasma” today, it’s probably in reference to the worst level of a popular video game. But as late as the 19th century, medical science treated such “bad air” seriously. Under the purview of miasma theory, doctors believed that epidemics of diseases such as cholera and bubonic plague originated from noxious air wafting from decaying, rotting flesh.

Enter John Snow. Mapping an 1854 outbreak of cholera, Snow discovered that the afflicted shared a common environmental link. They all secured water from a pump on Broad Street in Soho, London. Snow theorized it was the water, not the miasmatic air, that caused the outbreak. He removed the pump’s handle, nullified the spread of the disease, and proved his theory accurate.

Because of this, Snow is widely considered the father of epidemiology. Michael J. Dowling, president and CEO of Northwell Health, offers an additional honorific. He cites Snow as a “classic upstreamist,” one whose example is important to understanding our struggles with upstreamism today.

A clinician checks a young girl’s vitals. Health care professionals do their best when the patient is with them, but patients spend much more time in their “upstream environment.”

Upstreamism is a call for health care professionals to recognize that many of the determinants affecting a patient’s health exist outside the medical facility — that is, upstream of it.

A clinician can prescribe medicine or offer advice when the patient is in their practice, but consider how much time the average person spends in a hospital and the like. Very little. Instead, the vast majority of a patient’s life is spent upstream, in their environment, where many mental and physical health issues can manifest and potentially worsen.

If a health care professional is to be an upstreamist, they must equip themselves to assess and address these social and cultural determinants together with a patient’s symptoms.

Rishi Manchanda, founder of HealthBegins and upstreamism advocate, says that “one’s zip code matters more than your genetic code.” In fact, he points out, epigenetics shows us that our zip codes can shape our genetic codes.

He measured the same vital signs, got the same results, but asked an additional question: what were her living conditions like? Turns out, her living conditions weren’t ideal. Her housing had mold, water leaks, and cockroaches. Manchanda theorized that her condition may be the result of an allergic reaction to the mold, a diagnosis the others missed because they only considered Veronica’s symptoms in isolation. They forgot to look upstream. 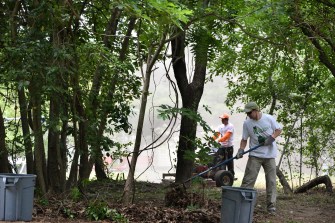 “If you’re living in a very, very good neighborhood, […] you will live years longer than the person who lives in a very, very poor area, in general,” Dowling said in an interview. “So if I want to improve your health, I’ve got to make sure that I have doctors, and nurses, etc., to provide medical care to you. But I’ve also got to figure out how to work on all of these other things.”

That’s a lot for health care professionals to be responsible for, especially when one factors in the exorbitant rates of burnout facing doctors and physicians.

Why health care should start long before you reach the hospitalcontent.jwplatform.com

Going back to Veronica’s story, Manchanda didn’t solve the problem alone. He connected her with a community health worker, and the partnership paid off. The community worker found mold, a strain Veronica was allergic to. Once her home conditions improved, Veronica’s quality of life did as well. Manchanda inadvertently helped one of her sons, too, as his asthma was exacerbated by the same mold.

“If we’re all able to do this work, doctors and healthcare systems, payers and all of us together, we’ll realize something about health. Health is not just a personal responsibility or phenomenon. Health is a common good,” Manchanda said in his TED talk.

Beyond search engines, technology companies are making a big push for health care. The tools and innovations they develop could streamline the mapping of a patient’s upstream environment. For example, devices like smartphones and Fitbits may allow patients to generate their own health records, offering doctors a proactive, up-to-date account of a patient’s environment. The growing ubiquity of such devices will also allow doctors to perform virtual health visits, giving them easy access to patients and their live-in environment.

This brings us back to John Snow. If he hadn’t looked to the environment, looked upstream, he may have missed a solution that saved people’s lives. The problems facing upstreamists today may require solutions more taxing than removing a water pump handle. But through technology and changes in social attitudes, they are manageable and can have a lasting impact on health care.

If you want a medication to kick in faster, lean right.
Health

It’s simple to make, easy to use, and should work against any variant.
Up Next
The Present

Digitally recording historical sites could serve as insurance in the case of disaster.