Marijuana legalization is no longer a libertarian or progressive issue. We need this new, legal industry to replace the depleted economies of the rural South and Midwest. 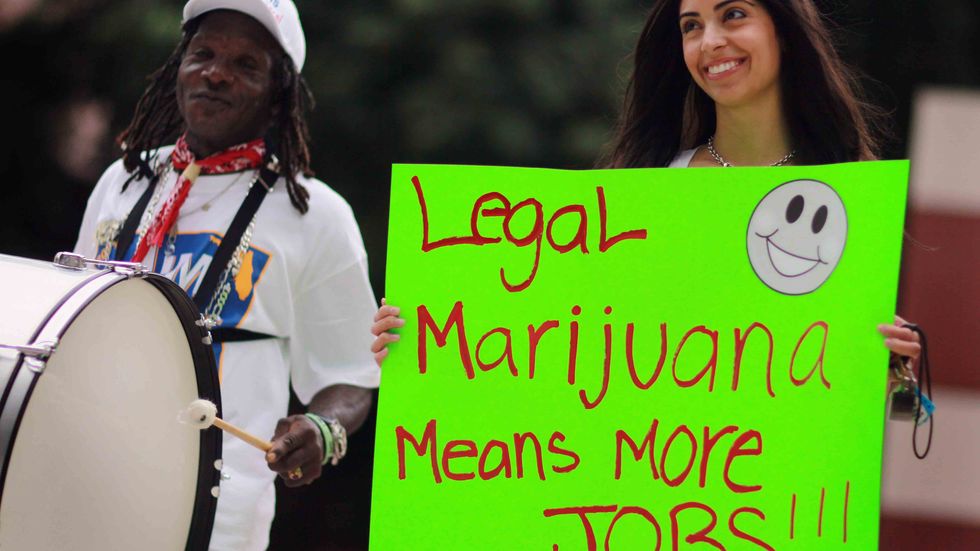 This piece is part of a larger series examining what big ideas a Trump administration could use to achieve its most ambitious goals. Read more entries in our "The Art of the Bill" series here.

If you’re anything like me, you’ve spent the weeks since the 2016 presidential election not as a human being, but as a sentient ball of white-hot rage. You’ve said things to lifelong friends you later had to apologize for. You briefly considered not going home for the holidays. Your Facebook posting frequency has tripled, and all of it is about politics.

But in the spirit of empathy and understanding for those who disagree with you, you’ve also been trying to hold the door open to their viewpoints, metaphorically speaking. It may have, in retrospect, only been a sliver of an opening, but the fact that you still kept it open at all speaks to your genuine desire to find some common ground. After all, you could have slammed it shut, opened it, and slammed it shut again before bolting the lock, welding more bolt locks onto the door, building another door behind that door — but forgetting to make it a “door” and actually just making it “a wall” — then building a panic room behind that wall and sealing yourself inside it with enough food and water for the next four years so you don’t have to talk to anyone about anything instead.

It’s time we legalize the hell out of marijuana.

A lot of things led to this election. The DNC refused to hear the people when they passionately cried out for change (some may say their passion was so hot, it berned), Hillary Clinton wasn’t appealing enough, James Comey and the FBI dropped a big sticky mess all over America two days before the election, the Russians played us like a fiddle, Nazis aren't afraid to openly call themselves "Nazis" anymore, and on and on and on.

Many people in this country felt economically disadvantaged and systemically left behind (right and left alike), and a slimey, snakeoil charlatan came along and promised they could save themselves if they pushed down their fellow citizens. So they did. It's terrible and incredibly disheartening, but that's what happened here.

Before we all start saying, “They’ve just been lied to and had their fear stoked by a crazy Republican party!” (which … you might not be wrong) let’s take a beat to actually examine their problems.

The Opportunity Index is "an annual composite measure at the state and county levels of economic, educational, and civic factors that expand opportunity." In short, they gather data on unemployment, education, early childcare, and poverty levels and translate those metrics into an "opportunity score" for every county and state in the nation.

They also break out their information by data point. Below, find their map detailing median household income across the country, per county.

Compare it with the 2016 electoral map, by county.

via The New York Times

It's money. It's always about money. The areas of this country that were making more money (besides the area around Wyoming, which has voted Republican in the past ten Presidential elections), voted for Hillary Clinton.

The rest of the county (and Wyoming) voted for Donald Trump.

Trump won because he told people who were clinging to normalcy with their fingernails that he could help them gain some kind of control over their lives again.

In their eyes, they saw Hillary Clinton giving private speeches to big bankers and gladhanding her way through the global elite (which, for all her many strengths, she is a member of). Then they saw this guy who talked like them show up in their hometowns with huge, fun rallies where everyone could get together and openly scream about the anger and hatred that had been boiling inside them for nearly a decade but they felt they weren’t allowed to think, let alone say. Every night they served their kids hot dogs and baked beans again, every time they swallowed their pride and applied for unemployment, every news story of some rich celebrity getting away with — and even celebrated for — being a pampered brat while their kids could barely hold onto a part-time job at Walmart got screamed out at those rallies.

Was Hillary the eminently more qualified candidate for the job? Absolutely. Is Trump a liar? Undoubtedly.

But Trump’s voice was the only voice they heard, and he was saying, “Aren’t you sick of putting everyone else first?”

It might be a fundamental flaw in human nature, but the fact remains that it is much easier to consider the plight of others on a full stomach.

It stands to reason that if the economically disenfranchised regions of our country had some kind of way to earn their lives back, they'd be less prone to fear-mongering madmen and more open to empathy. But their coal mines and steel mills are gone, and they’re not coming back. Trucking, the last labor job that still offers a portion of this group a shot at the middle class, is well on its way to being replaced by automation.

They're desperate because they live in desperation. Their jobs and healthcare are gone. All they have left are opioids and unemployment checks.

It's time to legalize marijuana for personal use, and sale.

The momentum is already clearly there. More people supported legalization than those who opposed it for the first time in 2013, and the trend lines are very clear about which direction the country is going.

While marijuana federally remains a Schedule 1 drug per the Controlled Substances Act, 8 states have completely legalized the possession, purchase, sale, transportation, and cultivation of marijuana. A further 12 states have decriminalized it with some restrictions, 14 have legalized it for medicinal use, and the remaining 16 have reduced the possession of it to a misdemeanor charge.

America has spoken, is speaking, and will continue to speak. While one group of disenfranchised voters made their voices heard this election, another group of voters in California, Florida, Massachusetts, Maine, Montana, North Dakota, Nevada, and that liberal bastion of communism, Arkansas, spoke up very loudly in favor of the loosening, if not the abandoning, of marijuana restrictions for American adults.

Which brings me to my point. This article isn’t about speaking up for marijuana reform; this article is a free landslide victory to the first politician that claims it.

Don’t make the mistake of thinking this gimme is only for progressives or liberals. The issue isn’t a partisan one, it’s generational. 68% of Millennials favor marijuana legalization, and the number goes down as people get older, not as they move rightwards on the political spectrum. More Republican Millennials support legalization than Democrats in Gen X, the next oldest generation.

The support is there, it is growing while the opposition is literally dying, and the need is greater than ever before. Marijuana legalization is no longer a libertarian or progressive issue — hell, it’s not even a political one. We need this new, legal industry to replace the depleted economies of the rural South and Midwest and stop short the waves of desperation flooding our heartland, and we need it to happen before our next national election. If not, the terrifying wave of racial resentment that’s currently sweeping our country will only be Act One. We saw what Act Two looked like in the 1940s, and things like the United Nations were put in place specifically to prevent Act Three.

So the nation — maybe even the world — needs marijuana legalization right damn now, in order to heal our divide and help us finally hear each other again (as I said earlier, the plights of others are more readily heard on a full stomach). The future of the world may be at stake, but if you, the politician reading this, need me to explain this even more selfishly, allow me to break down why you want to make this your cause.

The first politician at the national level that makes the federal legalization of marijuana to individually grow and sell their issue and pitches it as hard as they can to the impoverished South and Midwest as an economic recovery plan will receive a tidal wave of support. It will easily get passed by the entire country, it will bring truckloads of cash to local economies that desperately need it, and they will have support through whatever else they want to do politically for the next decade.

Besides, the GOP doesn't have anything to rebel against anymore, so this could be a right wing or left wing issue. The left could approach it from a "personal freedom" angle, or the right could attack the "good business sense" side. The only important thing is that it's messaged directly at the poor in the South and Midwest.

Denver doesn’t need marijuana. New York, Los Angeles, and San Francisco don’t need marijuana. The cities are fine, and they don’t have fields to grow the stuff anyway. Give this industry to the South and the Midwest, heal their economic wounds, and make it much harder for the next despot to convince them to vote against their fellow citizens’ rights.

Legalize pot, and save the world.