97.1% of the U.S. workforce commutes to and from work. 86% do it every day. It takes the average commuter 26 minutes to get to work, and the same to get home. Many of us aren’t that lucky, and the whole thing, as we probably don’t need to tell you, feels like a tremendous waste of our personal time. And it is. Especially when there’s traffic, in which that same average driver spends 41 frustrating hours a year, blowing about $1,642 annually in commuting-related costs. This is according to statistics compiled by Auto Insurance Center. They’ve just published their research as illuminating infographics we’re happy — well, maybe “aggravated” is a better word — to present. Auto Insurance Center used data from INRIX, American Factfinder, and Census.gov combined with the results of an Amazon Mechanical Turk survey.

All of the infographics in this article are by Auto Insurance Center. 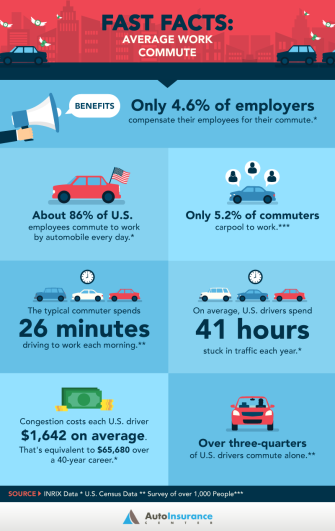 Three-quarters of us drive completely alone to and from work, suffering in solitude. Of course, if you’re already on-edge about commuting, having to deal with other passengers may just be asking too much. On the other hand, where there are people, there’s the possibility of being entertained. Just ask the shockingly few 5.2% of commuters who carpool.

The worst U.S. cities for commuting

It’s not just time you’re spending behind the wheel as you travel to your job and back: You’re also spending money for fuel, tolls, wear and tear on your car, and insurance. Some places cost more for commuters than others. They’re mostly our coastal megalopolises (megalopoli?), with the exception of booming Atlanta. 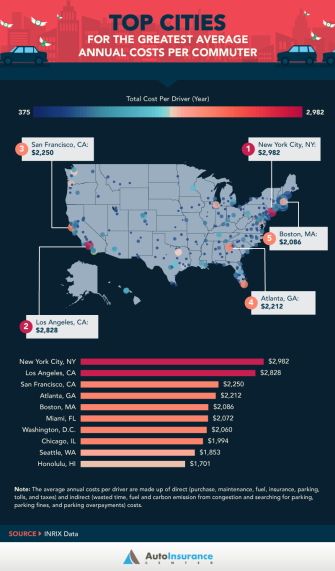 For those commuters who have to deal often with traffic, it’s a long, depleting exercise in:

As with expense, the coastal areas of the U.S. plus Hotlanta are the most packed with the automobile and its nasty cousin, traffic. 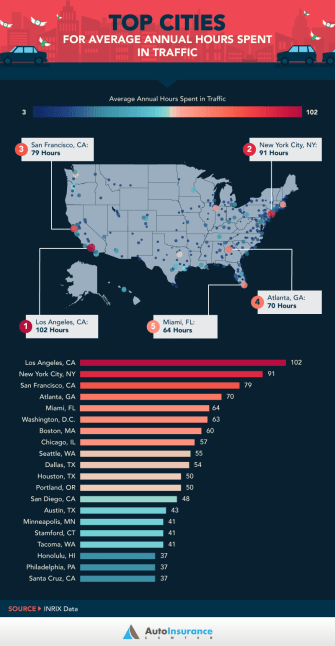 As you may have noticed above, just 4.6% of employers compensated their commuters. And those who did weren’t really handing out the big bucks anyway.

On top of that, few employers actually allow employees to shift their schedules to avoid heavy-traffic times and such.

Should employers compensate us for commuting?

Compensation by employers isn’t actually something that most employees feel they’re entitled to, actually. Just 34% — it would be interesting to see if this coincides with commuters who regularly deal with congestion, though Auto Insurance Center doesn’t provide that figure. 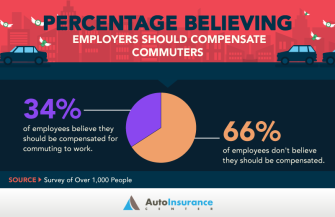 It doesn’t matter where the employees live. The figures are pretty consistent. 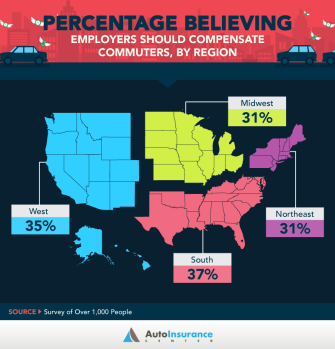 What kind of compensation

What kind of employer compensation does the third of Americans who think employers should step up have in mind? Well, basically, fuel, time, and wear and tear. 43% of those surveyed felt that they should just generally be paid a bit better if they commute, which is another way of saying they think lousy-no-good telecommuters should be paid less.

It is what it is

Hey, if it was all enjoyable they wouldn’t call it “work”. Telecommuting has its downsides, too — it’s lonely and hard to get ahead — so it’s not like commuters are getting an especially raw deal. Carpooling is something that everyone really should consider doing more of. It’s not just good for the environment and more economical, but it also offers more potential for filling that time on the road than just sitting there, muttering behind the wheel.

For the fewer than 50 people with this blood type, finding a blood transfusion could be extremely difficult.
Up Next

General The Big Think, Inc., (“Big Think”) strives to ensure that its services are accessible to people with disabilities. Big Think has invested a significant amount of resources to help […]