It’s widely, and cynically, believed that police give out more tickets at the end of each month to make their quota, doing their bit to keep their departments on-budget. But is this true? Well, yes, but… The fact is, for anyone who hopes to, let’s say, “bend” the law, it’s a complicated game of playing the odds (not that Big Think encourages unlawfulness, of course). Lawyer-directory company Avvo decided to find out if there actually are trends in summons-giving. Confronted by inconsistent record-keeping nationwide, they decided to use Fort Lauderdale, Florida, an area of roughly 175,747 residents, and a detailed database of tickets they’ve been issued as an example. Avvo was able to analyze some 57,000 tickets issued between January 1, 2017 and May 1, 2018. It’s just published the results of that study.

All the images in this article are by Avvo.

How likely are you to get a ticket?

Basically, every year you have a 16% chance of getting a ticket if you’re an average driver. Obviously, road maniacs—most commonly younger drivers and men—and anyone under the influence have a higher chance of being popped. For your odds over a multi-year period just add another 16% each year. 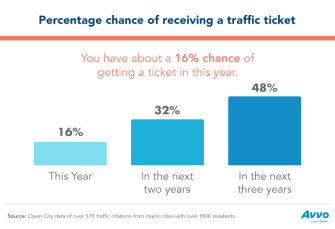 What are you most likely to get a ticket for?

Tickets are more often issued for speeding than anything else, but not by as much as you’d think: just 24.6%. Coming in a close second at 20.7% is documentation issues—lack of a license and registration papers, or other paperwork, presumably including insurance cards. Next up is operating a vehicle in a prohibited situation or time of day—some states award provisional licenses for new drivers that stipulate conditions under which they’re cleared to drive. Finally, there’s that busted taillight, or missing seatbelts or wicked mods that look so cool but take one’s ride outside of safety standards. As far as just driving badly—illegally, recklessly, or carelessly—that accounts for just under 12% of tickets. 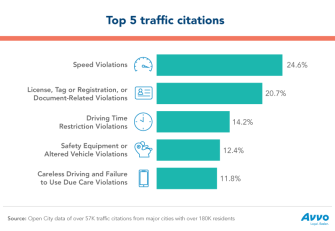 As Avvo notes, lack-of-documentation violations can be especially pernicious since they may initiate a vicious cycle in which drivers whose licenses have been suspended can no longer get to their jobs to earn the money to pay their fines, leading to additional charges and fines, and so on.

Officially, of course, this doesn’t exist. Don’t exceed the speed limit. However, a study of 224,915 tickets issued over three years in St. Paul, Minnesota found that only 3% went to people driving less than 10 mph over the limit, and most tickets went to drivers only slightly exceeding that: 12 mph.

Someone on officer.com asked how much one can exceed the speed limit before getting a ticket and received a chilling, and no doubt legally accurate, reply: “by asking your question you are conspiring to break the law.” So we’re done talking about this. Moving on.

So, the end of the month…

Yes, it’s true. The end of the month as the most tickety time is supported by the statistics. Is it about meeting quotas? Maybe: the last four days of the month are among the top five days with the most tickets. But, the first of each month came in at the #3 position, suggesting that either: 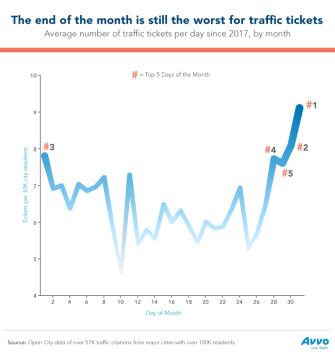 Every infraction has its day

So the end of the month is nasty no matter what kind of traffic violation you’re ticketed for. Still, the day-to-day ratios vary, though with all types of violation experiencing, oddly, a peak in tickets on the 11th day of the month? 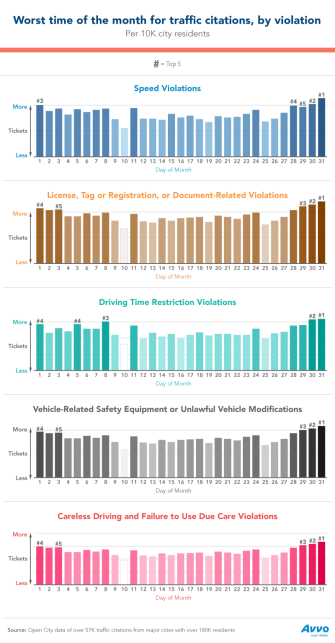 Is there an especially bad time of day, or bad day of the week?

Not very surprisingly, the worst time would be during morning drive time, from 7-9 am. It’s the time of day with the most cars on the road, after all. And Mondays. Mondays that are already the worst day of the week for many of us. Mondays far exceed the other days of the week for ticket-giving. Perhaps officers are just as grumpy as everyone else is. 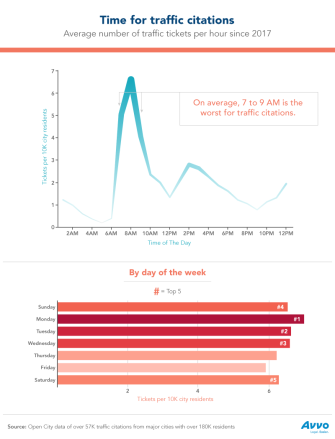 Why so many tickets?

Look, the larger truth behind all of this ticketing—quotas aside—is to keep us all safe. They serve as an effective deterrent for us in those times when we might otherwise switch to mental auto-pilot while driving, or lose our tempers—two things we all want to avoid, of course. We’re taught when we learn to drive that cars are dangerous machines, and it’s all too easy to forget this when driving becomes a routine activity. It’s also easy to forget how quickly, out of nowhere, a life can change forever—or worse—when we forget to drive safely. Tickets are there to remind us.

Related
Sponsored
What childhood “money story” is shaping your financial behaviors?
Here are the signs that you inherited “money anxiety” from your parents.
The Present
The “maritime Indiana Jones” who salvages shipwrecks now wants to tow icebergs
Simple physics makes hauling vast ice chunks thousands of miles fiendishly difficult — but not impossible.
Neuropsych
Inside the brains of aging dogs
In a citizen science project, thousands of pet dogs are helping scientists to understand what happens to memory and cognition in old age.
How to fix your money trauma
Do you remember feeling “money shame” for the first time?
▸
7 min
—
with
Dr. Brad Klontz
Neuropsych
The most common source of awe might surprise you
It’s us.
Up Next
Sales
How Can I Improve My Persuasion Skills?
The power of persuasion is one of the most impactful tools you can have in your professional toolbox — particularly as a leader. Persuasion skills can help you influence the […]