The first time I visited Amsterdam I quickly learned the rules of the road. Freshly off a 23-hour train ride from Madrid—three seven-hour train rides and two short connecting shuttles, meaning no sleeping car for the duration—my friend and I stumbled down Nieuwezijds Voorburgwal in a daze. Discerning any distinction between walking, cycling, driving, and trolley lanes proved difficult in such a state.

I was awakened to this fact when an angry Nederlander put his shoulder down and checked me onto the “walking” sidewalk as he pedaled by. Welcome to that famous Dutch hospitality.

In fact, for the rest of our trip, the hospitality was overwhelmingly positive. In retrospect, I can understand the biker’s frustration. Cyclists are perpetually engaged in an existential fight for their lives, figuratively and literally. As someone who has pedaled around Jersey City, Brooklyn, and Los Angeles over the course of my adult life, I know well the struggle cyclists face.

When my editor assigned this new study from her Australian homeland, my initial reaction was to chuckle. Here’s the key bullet point, for context: “A national Australian study has found more than half of car drivers think cyclists are not completely human.” The data are not that funny even if the headline is.

Conducted by researching 442 respondents in Victoria, New South Wales, and Queensland, lead author Dr. Alexa Delbosc and her team at Monash University discovered that by dehumanizing cyclists, drivers were more likely to act aggressively toward them. In fact, 10 percent of drivers admitted purposefully driving close to cyclists even though the law calls for a five-foot distance when passing them on the road. 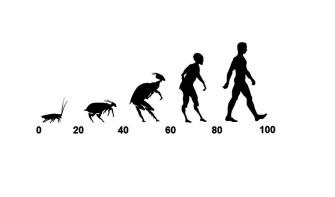 The study authors designed this insect-human scale because of the common slurs used against cyclists referring to them as “cockroaches” or “mosquitoes”.

Given the above graph to rate their feelings on cyclists, 55 percent of non-cyclists chose the life form to the left of human. Thirty percent of cyclists did the same, which makes you question their skills in self-perception (or self-worth). Seventeen percent of drivers report blocking cyclists on purpose while 9 percent have cut off cyclists for—fun? sport? schadenfreude?

Two other recent studies, also conducted in Australia, confirm these results. The first, published in Journal of Safety Research, relied on self-reporting by 3,769 drivers in Queensland. Nearly half replied that they don’t care about the five-foot rule. Fortunately, a slightly higher percentage of drivers (4 percent more, to be exact) pay closer attention when the speed limit is higher.

The second study, this one in Accident Analysis & Prevention, polled 308 drivers, coming to a simple conclusion: They think roads are built for cars alone. As the first commenter on the article notes, “I’m just happy when they don’t throw things at me,” a sentiment confirmed by my editor, who mentioned that living in New York City is a “dream” because she doesn’t have to see cheeseburgers chucked at cyclists anymore.

These studies remind me of previous studies I’ve covered on texting and driving. Roads require unspoken social contracts, a fact many people don’t consider. You get a license; the road is yours. Many modern classrooms lack the fundamentals of civics and ethics; we need a class focused on driving ethics as well. Distracted driving results in over a thousand injuries or deaths every day in America, an astonishing number that could easily be avoided if drivers agreed to pay attention to the road. But they don’t.

Which is why, in Los Angeles, I rarely cycle. In one two-week period, three friends of mine were hit. One, a professional violinist, could not play for over a year given what happened to her shoulder. Another couldn’t work out properly for months due to his wrist injury.

In good public safety news, the city of Los Angeles has made an effort to increase bike lanes, making it more commuter-friendly. In 2015, city officials signed onto the Vision Zero plan, launched in Sweden in 1997 as a means for reducing pedestrian deaths. New York and San Francisco previously hopped aboard. The same year, 45,000 cyclists nationwide were injured (or killed) on streets. Even though cyclists make up less than 1 percent of commuters, they account for nearly 3 percent of fatalities.

In the new study, A. Delbosc et al. write:

[T]his [research] suggests that one way to reduce aggression might involve humanizing cyclists rather than just encouraging positive attitudes. How that might be done is not obvious, but it raises a number of possibilities. Mandatory helmet laws in Australia mean that hair and faces are more obscured; this may be contributing to dehumanizing beliefs. Furthermore, the perception that cycling requires a ‘uniform’ of Lycra and fitness gear may be contributing to this feeling of cyclists as ‘others’, as well as increasing barriers to participation (Daley & Rissel, 2011). Future research might test the effectiveness of promoting the idea that cyclists are diverse and similarto other road users or maybe even find creative ways to show their faces to drivers so they are seen as persons, not darting mechanical obstacles. 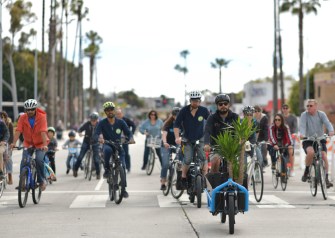 People ride bicycles in car-free streets during a CicLAvia event in Culver City on March 3, 2019. CicLAvia is a non-profit organization that hosts events where people can bike, walk, skate and stroll on car-free streets.

Sadly, just as there are aggressive drivers, aggressive cyclists stoke the hornet’s nest. They too must follow the rules of the road, yet many often speed through stop signs and red lights. Packs of weekend warriors clog up major city streets, frustrating drivers that cannot pass. As one friend noted when I mentioned this study, “Where we live there are thousands of cyclists daily riding along the busy beach road. It’s a recipe for disaster.” Another Australian resident, dismayed by the aggression toward cyclists, commented, “Along with the bike issue you will also find it goes both ways, often cyclists opt to use main roads when there are paths especially for them.”

In Los Angeles, the beach roads are a nightmare for drivers, but the problem persists throughout the city. Rush-hour cyclists utilize main thoroughfares with no bike lanes, forcing drivers to use one lane instead of two during the busiest times of day, when they could easily commute one street over. And let’s not even discuss scooter riders staring at cell phone as they fly down Venice Blvd.

There is no easy answer to this problem. We need fewer cars on the road. In a city like Los Angeles, where commuting is not an option but a necessity for most, cycling provides one means for accomplishing a reduction in automobile traffic. This requires a relationship between driver and cyclist, however. To be fair, many do honor this road dialogue. Yet too many do not.

That said, at least in America, the general sentiment is, “that guy’s a jerk,” not, “that woman isn’t human.” Such a mindset opens the door for exacerbated aggression. A little empathy is always called for, especially in a zone as dangerous as the street.

Fortunately, there is room for understanding. Three weeks after moving to Los Angeles, I traded my hybrid, necessary for curb hopping and navigating around (and over) Brooklyn potholes, for a road bike. Early one Saturday morning I was returning home from a beach ride through downtown Santa Monica. No cars in sight, I made a left at a red light. Then I heard the siren.

I thought it odd that a police cruiser was chasing down a car that didn’t exist, so I continued on my way. The second siren caused me to look over my shoulder. In my seven-and-a-half years since that morning I’ve never been pulled over, but there I was, standing beside my bike on 4th St as a police officer explained my potentially fatal error.

There had been an uptick in commuter deaths in the past year, he told me. Jaywalking is also known as “crossing the street” in New York City; in Los Angeles they take it seriously. I pedaled away without a ticket—the officer even apologized twice—but it was a sign that efforts at mending the fractured relationship between cyclist and driver exist. Both sides just need to play by the rules.

People are driving less. This trend is expected to continue.
Up Next
Starts With A Bang

What Would The Milky Way Look Like If You Could See All Of Its Light?

Even from our location, there’s a great lesson to be learned: the galactic plane obscures the Universe beyond it, about 10 degrees above and below it, in visible light, as […]