Does the coming age of intelligent machines mean billions of humans are about to be out of work? Not necessarily, concludes a new report from MIT’s Task Force on the Work of the Future. The two-and-a-half year study on technology and jobs concluded that while some jobs will disappear, innovations will also drive the creation of new jobs for the lower and middle class workers.

The report, “The Work of the Future: Building Better Jobs in an Age of Intelligent Machines,” also highlighted growing economic inequalities and recommended specific policies governments should embrace to make sure the transition to a future rife with robots doesn’t leave large segments of the population behind. Institutional changes must accompany the technological ones.

The Task Force that produced the document was co-chaired by MIT Professors David Autor and David Mindell and executive director Dr. Elisabeth Reynolds, while the expansive group of experts involved more than 20 faculty members from 12 departments, and over 20 graduate students.

One important note the study made is that while many expect automation to take over our lives in the near future, there is still time to prepare and make sure the transition to intelligent machines is in itself intelligent. Ultimately, it’s not the machines we need to worry about, but the exacerbation of the existing human-made problems and deficiencies. Specific areas policy makers should focus on include investing into skills development and worker retraining, improving job quality, and expanding and shaping innovation.

Perhaps the central message of the study is that technology both takes away jobs and creates new ones. Around 63 percent of the jobs carried out in 2018 didn’t even exist in 1940.

Here are the 10 ways humans should prepare for the rise of the role artificial intelligence will play in our lives:

The group pinpoints the importance of private sector investment in training employees, especially with the purpose of increasing the upward mobility for lower-wage and less-educated workers. This will particularly affect minority workers, who are overrepresented in this group. The report estimates only about half of employees get training from their employers in any given year. 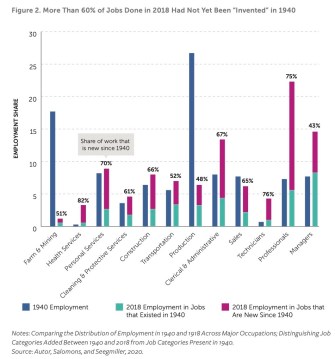 The report advocates getting the government to fund training programs that can help lead to middle-class jobs for workers who don’t have a four-year college degree.

Demonstration and field testing programs that work out new retraining and reemployment ideas should be given particular focus, according to the MIT scientists.

“Innovation improves the quantity, quality, and variety of work that a worker can accomplish in a given time,” wrote the report’s authors. “This rising productivity, in turn, enables improving living standards and the flourishing of human endeavors. Indeed, in what should be a virtuous cycle, rising productivity provides society with the resources to invest in those whose livelihoods are disrupted by the changing structure of work. 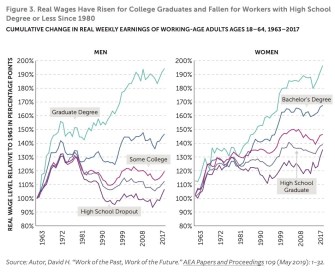 The report spotlights the growing economic disparity between low-paid workers and the rest of society. Compared to Canadians, for example, low-paid Americans earn 26 percent less. Government policy should make sure people in traditionally low-paid service jobs like cleaning, groundskeeping, food service, entertainment, recreation, and health assistance get adequate pay and some economic security. To that end, the researchers propose that the minimum wage should be raised to at least 40 percent of the national median wage. This value should also be indexed to inflation.

Several measures are recommended to improve unemployment insurance and extend it to workers that aren’t usually covered. The report suggests allowing workers to count their most recent earnings to determine eligibility, determining eligibility based on hours rather than earnings, dropping the requirement that unemployed seek full-time work (because many hold part-time jobs), and reforming partial UI benefits from the states.

Labor laws need to be both improved and better enforced, states the report. Contraction of private sector labor unions makes it harder for rank-and-file workers to bargain for wage growth that matches the growth of productivity growth. How workers are represented needs to be innovated as much as the technologies. Current U.S. laws “retard the development of alternative approaches,” write the researchers. For example, due to racial politics during the New Deal, sectors of the American workforce like domestic workers and agricultural workers are unable to participate in collective bargaining. 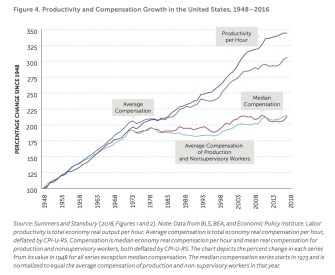 In a proposal aimed at fostering innovation and making sure its benefits are experienced by workers, the MIT group thinks it’s key to increase government spending on research, especially in areas not addressed by the private sector. These tend to involve longer-term research that addresses the social impacts of new technologies, zeroing in on major national problems, climate change, human health and similar larger research topics. Investing into research on human-centered AI, collaborative robotics and the science of education should be a part of this approach.

Small and medium-sized businesses should receive targeted government assistance to allow them to increase productivity via the new tech, advises the MIT team.

Innovation is increasingly “concentrated geographically,” think the researchers. For a country that has so many universities, entrepreneurs, and workers that are spread throughout, the benefits of innovation should be made available not only to more workers, but also to more of the country’s regions. Each state can have its own Silicon Valley.

Innovation is necessary in the tax law as well, according to the report. It’s important to change the manner in which the current tax code “unduly favors investments in capital” by eliminating accelerated depreciation allowances, applying corporate income tax equally to all corporations, and instituting an employer training tax credit.

Inspired by the group behaviors of simple animals, a team of roboticists has developed a new way for swarm robots to maneuver on land.
The Future

Here are its top priorities.
The Future

Mind Bank Ai is the newest entrant in an ambitious idea: using AI to create a kind of immortality.
Up Next
The Past