I’ve heard folks say that CEOs deserve what they make because of the time they put in.

While some CEOs probably put in many more than the average, that average is about 60 hours per week, according to a showed that CEOs worked: 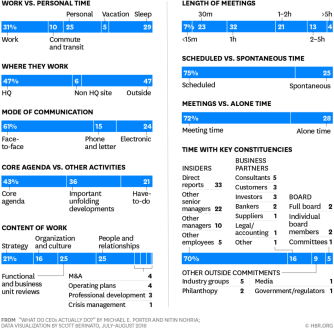 What did they do during that time? About 75% of CEO time is scheduled in advance, with 25% spontaneous.

The breakdown of hours spent working is interesting:

Here’s a sample, provided by the Harvard Business Review, of just one day for one CEO.

Image from What do CEOs Actually do?

In an intriguing finding, 61% of CEO communication? It’s face-to-face. 24% is electronic, and 15% good old-fashioned phone and letters.

According to Michael Porter, University Professor at the Harvard Business school, “We were able to look at 27 different CEOs across a wide range of industries, the average size about $13 billion, so these are big, complex, in some cases international companies. We tracked them for 13 weeks, or 3 months, 24/7. There’s never been data like this before—we’ve never known what CEOs do.”

He continued, “Time is indeed the scarcest resource.”

Time is the scarcest resource for CEOs: Harvard Business School study from CNBC.

What is not illustrated in a study such as this? The fact that CEO pay has risen much more quickly since the Great Recession of 2008 than for anybody else. Indeed, regular workers’ pay has fallen flat, and CEOs now make an average of 271 times regular workers’ pay. (It’s worth noting that this ratio is not as high as it was in years leading up to the Great Recession, but it’s the highest since then.) 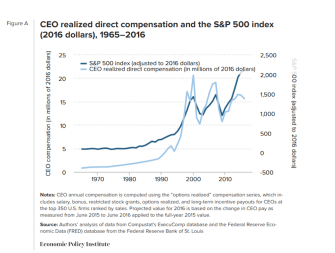 I’ll leave it to you to decide if that’s good or bad.

Are we approaching quantum gravity all wrong?

An exclusive interview with physicist Lee Smolin reveals how abandoning Einstein's dream may have been a terrible mistake.
13-8

Up Next
Personal Growth

Dolphin sanctuary gains steam thanks to ‘The Cove’ director push

Louie Psihoyos — the director of the Academy Award-winning documentary The Cove — is scouting out locations for his latest project, a real-life dolphin sanctuary.