Want to turn money into happiness? Buy services that give you more free time, suggests a new study from researchers at the University of British Columbia.

After surveying 6,000 people in North America and Europe, the researchers found that people who spend more money on time-saving services, like housecleaning or cooking, reported greater life satisfaction. Interestingly, it didn’t matter whether the people were rich or poor.

“The benefits of buying time aren’t just for wealthy people,” said senior author Elizabeth Dunn. “We thought the effects might only hold up for people with quite a bit of disposable income, but to our surprise, we found the same effects across the income spectrum.”

But was buying time-saving services actually causing people to be happier?

To find out, researchers gave $40 to 60 adults in Canada and told them to spend it time-saving services. The participants had groceries delivered, their homes cleaned. One woman paid the “neighborhood boy” to run errands for her. 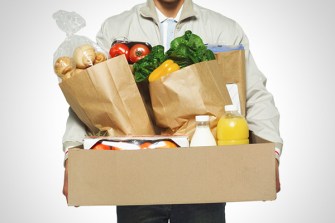 During the following weekend, researchers gave the same participants another $40 to buy material goods – board games, clothes, wine. The results showed that buying time-saving services left people in better moods than when they bought material goods.

“Our results suggest that buying time boosts happiness by mitigating the effects of time stress — the feeling that there aren’t enough hours in the day,” wrote study authors Ashley V. Whillans and Elizabeth W. Dunn in the L.A. Times. “The feeling of being pressed for time is typically linked to lower life satisfaction, and we observed this well-established link in the lives of most of the people we surveyed. What’s striking is that the detrimental effect of time stress disappeared among people who used money to buy time.”

In places around the world where personal income is on the rise, free time is becoming something of a luxury. This kind of time stress has been shown to be detrimental to personal health, contributing to insomnia, stress and decreased life satisfaction.

Given the known effects of time stress, it’s strange that more people don’t choose to buy more free time. The researchers note that just 2 percent of the 98 adults they surveyed in Canada said they’d spend their $40 on time-saving services.

The researchers suggested women might especially benefit from buying more free time. Despite their having achieved greater access to jobs and education in recent decades, life satisfaction has steadily declined among women in the West. The culprit is likely increased work hours mixed with their returning home to a “second shift” of household chores.

People who complain about time stress are often objectively busy, but they also might be inflating stress levels out of a perceived lack on control over time in their lives. Buying more free time could help that, but it’s a fine line – the researchers note that, ironically, spending too much money on time-saving services could undermine perceptions of personal control. This could actually decrease well-being by making people feel incompetent to manage their own lives.

Still, most people would probably do just fine by outsourcing their household chores or dinner prep.

“Don’t think about time-saving services as the lazy option,” wrote Whillans and Dunn. “Think of buying time as an escape hatch from the excessive time pressure of modern life.”

Tags
free timehappinesspersonal financeStresstime stresstime-saving services
In this article
free timehappinesspersonal financeStresstime stresstime-saving services
Related
Mind & Brain
Antifragility: How to use suffering to get stronger
What doesn’t kill you makes you stronger. That old adage roughly sums up the idea of antifragility, a term coined by the statistician and writer Nassim Taleb. The term refers […]
Mind & Brain
Mindfulness: New age craze or science-backed solution?
Research has shown the benefits of mindfulness, but the current mindfulness craze cannot deliver on its overhyped promises.
The Past
The meaning of happiness, according to a baker in ancient Pompeii
Searching for happiness in the midst of personal or societal crises are nothing new.
Your Brain on Money
How to trick your brain into saving money
Humans are wired for short-term thinking according to neuroscience, making it difficult to save for retirement.
▸
6 min
—
with
Big Think
Diversity & Inclusion
Navigating the fifth trimester: Why working parents need better support
A textbook pregnancy consists of three trimesters. The baby develops at a relatively predictable rate during this time, from pomegranate seed to avocado to watermelon. And mom’s body adapts accordingly […]
Up Next
Politics & Current Affairs
This Week In Comments: July 24th—31st
Did you win our Comment Of The Week? Only if you’re funny, eye-opening, and informative.