The Plasmodium Consortium is a new policy research institute attached to Hampshire College in Massachusetts. At an event on March 2, their secretary, experimental philosopher and conceptual artist Jonathon Keats, announced the group has cracked three of America’s most vexing and controversial problems: the destruction of our climate, the opioid epidemic, and immigration. The Consortium’s secret? It brings a unique perspective to these issues. “They’re all slime molds,” says Keats. This is the first analysis of these issues by non-human scholars, he notes, asserting, “Their advice is objective, and transcends our polarized political environment because they don’t belong to our species.” (A slime mold was previously appointed to the Hampshire faculty.)

Specifically, the consortium is comprised of Physarum polycephalum slime molds, and we’ve reported before on their surprising learning, memory, and problem-solving capabilities, even though they completely lack neurons and a brain. The slimes solve problems and build knowledge using “habituated learning,” in which their behavior changes over time in response to a repeated stimulus. 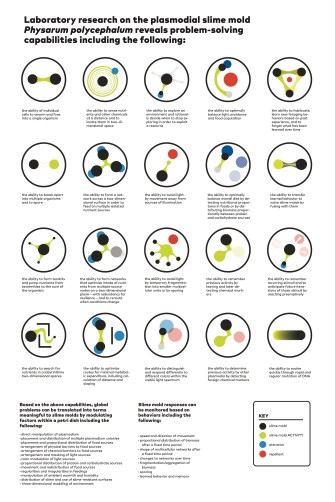 The project is interdisciplinary, involving faculty and students — and slime molds, or course — and its results were presented in the Hampshire College Art Gallery from January 29 to March 2, 2018.

Keats explains in the project’s press release, “…from the beginning, we’ve believed that slime molds were equally capable of researching more abstract problems. Over billions of years, they’ve had to overcome challenges including ice ages and collisions with asteroids — events even more calamitous and varied” than those the U.S. is trying to resolve. The Consortium’s conclusions are based on experiments that distill expansive issues to their underlying questions and devise models that allow slime molds, (somehow) brainless experts that they are in problem-solving, to come answer them.

To ascertain the most logical, sound response to life in a degraded environment — such as one produced by offshore drilling, excessive manufacturing, and pollution — the Consortium set up an experiment to test the appeal and benefits of a less-polluted environment for their scholars.

The experiment involved the creation of two pastes made of oats for nutrition and salt, which slime molds avoid. The first had a lower amount of the mineral, and the second was saltier. Petri dishes of nutrient-free agar were prepared, with the first paste placed on one side, and the second on another. 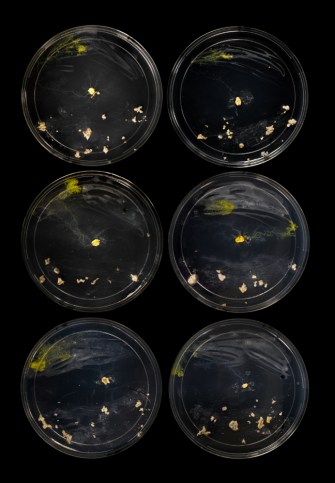 Slime molds placed in the centers of the dishes consistently moved to the less salty paste, revealing their preference for a non-toxic environment. A second experiment used intermittent flashes of light to simulate environmental instability to see if that had any effect on slime mold choices — the results are not reported in the Consortium’s publication.

The Consortium also looked at marijuana legalization. While some consider grass a gateway drug to harder substances such as opioids, others assert that “people can be weaned from hard drugs with access to less harmful ones,” according to the Consortium’s report. They performed two experiments to see how slime molds are drawn to a favorite chemoattractant, valerian root as opposed to a useful nutrient.

In the first experiment, they were given a simple choice: pure valerian vs. pure nutrient. This binary choice — modeling a nation in which marijuana is not legal and the only choice is hard drugs or none — resulted in something that looked a lot like the growing opioid epidemic.

In a second experiment, pure valerian was placed at the center of dishes with concentric rings containing progressively less valerian and more nutrient moving outward to an outer zone of pure nutrient. 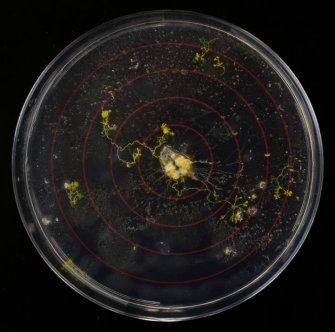 The results were summarized in a letter the Consortium sent to U.S. Attorney General Jeff Sessions:

Confronted with a binary choice between a highly-addictive chemical and a nutritionally-balanced meal, slime mold populations will consistently choose the former, with consequences that can be fatal. However when presented with a chemical gradient between the addictive substance and nutrients — equivalent to availability of gateway drugs in a human environment — slime molds show a distinct tendency to migrate from the former toward the latter, but not from the latter to the former, a choice that improves their chance of survival.

Benefits of a border wall, or not

The third study looked at the effect of a divider — a border wall — separating two populations of Physarum polycephalum, and how that affected the health of both groups.

For this, two populations of slime molds are placed on opposite sides of a petri dish, with one side having only protein as nutrition, and the other die exclusively carbohydrates. Slime molds prefer a balance of the two. Four scenarios were constructed: 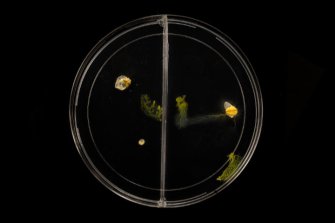 The slime molds were observed after 72 hours, and their health measured by the surface area covered. The populations unimpeded by a border were clearly thriving most successfully. 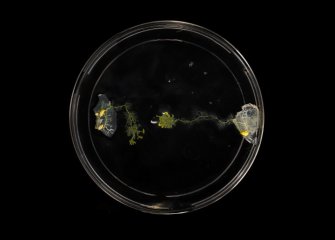 A central region also developed in which the two populations combined to create a third. From this, the Consortium concluded that instead of a border controlling immigration between physically adjacent areas — such as the U.S. and Mexico — an international zone could be beneficial since “the unconstrained slime molds were found to join together and thrive in the open border zone, suggesting that borders may be especially vital regions if allowed to develop without government interference.

Keats has been behind a variety of thought experiments like this one, and on one level it’s all in fun, while on another, it’s deadly serious. One may question the value of the new Consortium’s conclusions, suggesting their experiments simply reveal the obvious. But that’s the point. So many of the questions the U.S. faces are not really that complex — their answers are obvious. They’re just made to seem complicated by those who dislike the answers any Physarum polycephalum can plainly “see.”

Related
The Present
Radical idea: Redraw the U.S. map as a nation of city-states
While cities drive national economic growth, their political geography means they cannot effectively deal with inequality, poverty, and other socioeconomic problems.
The Learning Curve
Why do high IQ people stagnate in their careers? Emotional intelligence
Research suggests that emotional intelligence is more vital for success than IQ.
The Present
Even in the age of AI, some problems are just too difficult for computers
Computers are growing more powerful and more capable, but everything has limits
The Future
How the metaverse will revolutionize K-12 and higher education
Imagine going on a tour through the human circulatory system as a tiny cell. That is just one example of education in the metaverse.
Starts With A Bang
Ask Ethan: What are white holes, and do they really exist?
In General Relativity, white holes are just as mathematically plausible as black holes. Black holes are real; what about white holes?
Up Next
Starts With A Bang
Ask Ethan: Where Is The Line Between Mathematics And Physics?
They seem almost indistinguishable in some regards, but only one of them represents our physical Universe.When it comes to describing the physical world, we can do it anecdotally, as we […]