Scientists Catch Slimes Learning, Even Though They Have 0 Neurons 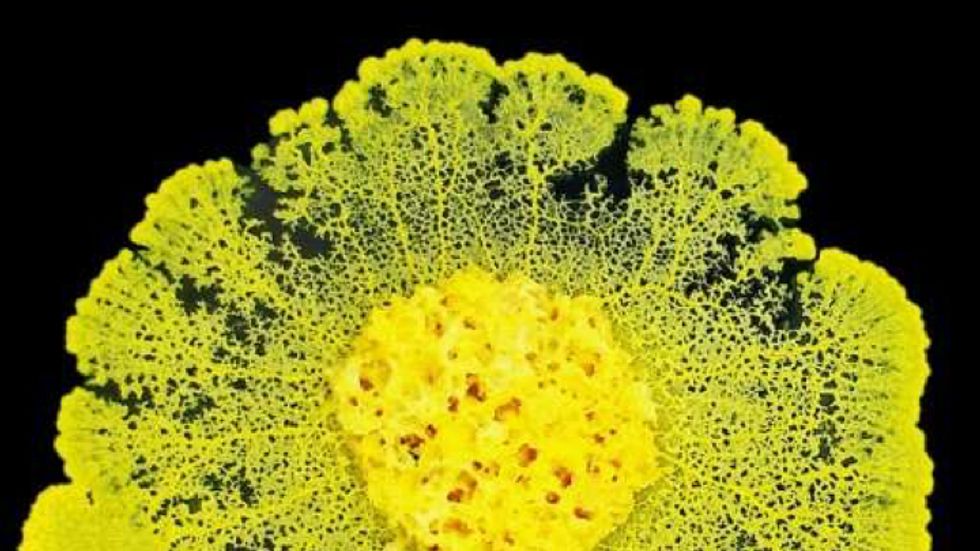 We generally assume thought and memory occur within the brain's neurons, but there are some examples in nature that make us wonder if that's really the only place they reside. Trained flatworms, for example, who've been decapitated retain their training in the new heads (and brains) they grow, suggesting that their acquired knowledge is somehow encoded in other body cells from where it can be retrieved. Even more intriguingly, researchers at Toulouse University's Research Centre on Animal Cognition (CNRS) in France demonstrated last April that a type of slime mold also has a memory and can learn, even though it has no brain at all. “Tantalizing results suggest that the hallmarks for learning can occur at the level of single cells," said the teams' study published in Proceedings of the Royal Society B. Even more surprising is the researchers' new report that one brainless slime can convey its knowledge to another brainless slime, as revealed in a paper published December 21.

The knowledge the slimes impart is “habituated learning," in which behavior changes over time in response to a repeated stimulus, in this case an irritating obstacle. At first repulsed by it, the slime eventually learns it can tolerate the irritation.

The slime mold in question is Physarum polycephalum, sometimes referred to as the “many-headed slime." It's a weird, yellow, blob-like organism of P. polycephalum cells, and it crawls from place to place on pseudopods, finger-like protrusions. In nature, Physarum polycephalum likes cool, damp places like rotting leaves and tree trunks.

When two of these slimes come in contact, they fuse into a single Physarum polycephalum.

Learning Without a Brain

To see if this slime could learn, they grew multiple Physarum polycephalum organisms in Petri dishes of agar, a common gel-culturing medium derived from algae. Next to each slime they placed another dish containing “food," a mix of oats and agar, and constructed an agar bridge over which the slime could travel to a meal. It took under two hours for each of the slimes to learn to get to their oat mix.

The researchers next put irritants in the slime's way — mild concentrations of quinine, caffeine, or salt that were bitter to the slime but not damaging. The slimes at first recoiled from the irritants and the bridges altogether before finding ways through narrow evasive pathways around them, taking about three times as long to get to get across the bridges to their food. After a few days, though, the slimes were again crossing their bridges quickly, suggesting habituation: They'd come to “understand" and learn that the irritants posed no real threat.

Knowledge Passed Among the Brainless

The new study involved 2,000 slime molds who were habituated to salt on their bridges, and 2,000 who were free to pass over their bridges to their food unimpeded.

The researchers then grouped the slimes to create pairs:

• Habituated — two slimes that were both habituated to the salt

• Naive — two slimes that hadn't been exposed or habituated to salt

Each pair was allowed to come in contact and fuse, creating new habituated, naive, and mixed Physarum polycephalum. Each was then presented with a salted bridge across which its oat mix awaited.

The researchers were surprised to find that the mixed slimes moved over and past the salt just as quickly as the habituated slimes, suggesting that the habituation had propagated throughout the new mixed Physarum polycephalum. (The naive slimes recoiled from the salt and then moved slowly around it as one would expect.) They then repeated the tests with new slimes fused from as many as four organisms, and found that even in mixes of three naive and one habituated slime, the resulting organism still knew the salt was no threat.

As a final test, the team separated fused slimes to try and ascertain how long the knowledge transfer was taking. Naive slime split away from habituated partners one hour after fusion retained an aversion to salt. After three hours, though, separated naive slimes were clearly no longer naive, climbing right over their salted bridged to dinner — they'd learned habituation from their former partners. One other thing: slimes fused for three hours grew a vein at the point of contact between them.

The scientists suspect this is the channel through which the habituated learning is passing between slimes, even if we don't yet understand quite how.

The two studies' implications for learning and memory are enormous. While there's no way yet to know if any of the observed phenomenon also occur in humans, it's nonetheless clear that at least some sort of memory can reside in cells other than neurons. At least in slime.