It acts a bit like a fungus, but fungi are no longer considered plants, but rather exemplars of their own classification kingdom. Still, though, it’s not that much like fungi. Current thinking is that its amoeba-like behavior makes it more like an animal, and a fascinating one that raises some profound questions. Though there’s plenty of controversy surrounding the moral validity of zoos, earning its place in one must still be considered a promotion of sorts. So congratulations, slime mold, and welcome to Parc Zoologique de Paris! 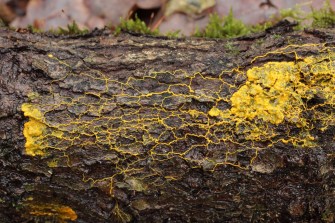 Known informally as Le Blob, the Parisian ambassador of the phylum Myxomycetes is actually a sample of Physarum polycephalum. It’s certainly among the park’s most exotic inhabitants, and maybe the type of organism you’d prefer to become acquainted with in a zoo, rather than out in the world, where it can grow up to several feet in size. Slime molds are roughly as common as tardigrades, and like water bears, they’re practically indestructible: Not only can one heal itself in a couple of minutes after being split in half, but it can also dry out and seemingly die, only to spring back to life upon re-moistening.

Slime mold isn’t pretty, at least until one views it at microscopic scale, where its tiny “fingers,” limbs called pseudopods, exhibit a definite delicacy. To our eyes, it’s an amorphous, yellow, um, thing, that’s been described as looking like dog vomit. It’s only that color in its early stages, though: Slime mold later turns gray, and then dissolves into a brown powder.

The unicellular organism is something like a big bag of nuclei, merging as it does with other slime molds it encounters. One of its affectionate monikers is the “many-headed slime.” Despite the fact that it lives sans eyes, mouth, or stomach, it moves to acquire its food, mostly bacteria, yeast, and fungi.

Another one of slime mold’s headline traits is the manner in which it reproduces. Le Blob releases spores that develop into one of 720 types of different sex cells that pair off with genetically matching sex cells to reproduce.

The really mind-blowing thing about slime molds — even calling into question the meaning of the word “mind” itself — is that it can formulate strategies for getting past obstacles and to its meal, and it can learn and remember its routes despite having no brain whatsoever (that we know of) and no neurons. It’s such unexpected behavior that some scientists suggest that it sets the meaning of the words “learn” and “remember” themselves tumbling down a semantic rabbit hole.

But wait, there’s more. As the zoo’s Bruno David says, “If you merge two blobs, the one that has learned will transmit its knowledge to the other.” What?

We’ve written before about the amazing intelligence of P. polycephalum, a characteristic which alone makes it worthy of zoo visitor’s attention, perhaps especially in France, where its smarts were discovered. “The blob is a living being which belongs to one of nature’s mysteries,” says David, in what may be an understatement.

The studies that revealed what Le Blob can do were performed at Toulouse University’s Research Centre on Animal Cognition (CNRS). Scientists there, led by Audrey Dussutour, above, demonstrated slime mold’s ability to exhibit habituated learning, and even to pass it to other slime molds.

In the tests, slime molds were blocked off from a favorite food, an oats and agar mixture, by barriers composed of three substances they find repellently bitter: salt, caffeine, and quinine. (Not harmful, just nasty to slime molds.) The slime molds, after a brief period of trying them out, soon learned they could safely traverse these barriers to no ill effect, and in a few days weren’t even slowed down by them.

When the subjects were allowed to merge with other slime molds that had not been habituated to the contaminates, the resulting blob moved right across the barriers without hesitation. (During merging, a prominent vein between two slimes suggested a possible pathway for exchange of knowledge.)

As far as learning goes, slime molds were then allowed to dry out and “die,” and demonstrated that upon resuscitation their food-acquisition strategy remarkably remained.

It may be that blobs are generally pretty great at brainless-teasers altogether. A separate study done at Keio University in Japan found that they’re better than some computer algorithms at solving the “Traveling Salesman Problem.” 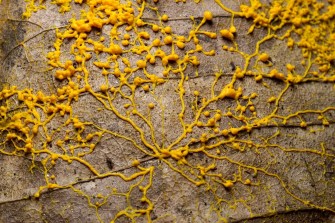 Obviously, an organism learning and remembering without a brain calls into question our assumption that brains and neurons are required. As Dussutour says, “that such organisms have the capacity to learn has considerable implications beyond recognizing learning in nonneural systems.”

According to Chris Reid, of Macquarie University in Australia, “By classical definitions of habituation, this primitive unicellular organism is learning, just as animals with brains do.” He adds, “Most neuroscientists I have talked to about slime mold intelligence are quite happy to accept that the experiments are valid and show similar functional outcomes to the same experiments performed on animals with brains.”

Not surprisingly, not everyone is convinced. Says Tufts’ University’s Michael Levin, “Neuroscientists are objecting to the ‘devaluing’ of the specialness of the brain.” Suggesting they might relax, he adds, “Brains are great, but we have to remember where they came from. Neurons evolved from nonneural cells, they did not magically appear.”

Being mortal makes life so much sweeter.
L&D Strategy

Much like energy and nutrients flow in a continuous cycle between the elements of a natural ecosystem, a free flow of knowledge fuels the growth of a learning ecosystem.
Videos

The US is falling behind in higher education. Can we turn the tide?

40% of today’s students work full time while another 40% are over the age of 25. Here’s how to change higher education to fit today’s students.
▸
3 min
—
with
Courtney Brown
Up Next
The Present

The Response Act calls on schools to increase monitoring of students’ online activity.