Just under our brain’s cortex and close to our brain stem sits the cerebellum, also known as the “little brain.” It’s an organ many animals have, and we’re still learning what it does in humans. It’s long been thought to be involved in sensory input and motor control, but recent studies suggests it also plays a role in a lot of other things, including emotion, thought, and pain. After all, about half of the brain’s neurons reside there. But it’s so small. Except it’s not, according to a new study from San Diego State University (SDSU) published in PNAS (Proceedings of the National Academy of Sciences). 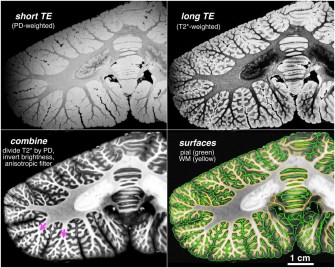 The team didn’t physically unfold a cerebellum in their research. Instead, they worked with brain scans from a 9.4 Tesla MRI machine, and virtually unfolded and mapped the organ. Custom software was developed for the project, based on the open-source FreeSurfer app developed by Sereno and others. Their model allowed the scientists to unpack the virtual cerebellum down to each individual fold, or “folia.”

Sereno tells SDSU NewsCenter that “Until now we only had crude models of what it looked like. We now have a complete map or surface representation of the cerebellum, much like cities, counties, and states.”

That map is a bit surprising, too, in that regions associated with different functions are scattered across the organ in peculiar ways, unlike the cortex where it’s all pretty orderly. “You get a little chunk of the lip, next to a chunk of the shoulder or face, like jumbled puzzle pieces,” says Sereno. This may have to do with the fact that when the cerebellum is folded, its elements line up differently than they do when the organ is unfolded.

It seems the folded structure of the cerebellum is a configuration that facilitates access to information coming from places all over the body. Sereno says, “Now that we have the first high resolution base map of the human cerebellum, there are many possibilities for researchers to start filling in what is certain to be a complex quilt of inputs, from many different parts of the cerebral cortex in more detail than ever before.”

This makes sense if the cerebellum is involved in highly complex, advanced cognitive functions, such as handling language or performing abstract reasoning as scientists suspect. “When you think of the cognition required to write a scientific paper or explain a concept,” says Sereno, “you have to pull in information from many different sources. And that’s just how the cerebellum is set up.”

The study also suggests that the large size of their virtual human cerebellum is likely to be related to the sheer number of tasks with which the organ is involved in the complex human brain. The macaque cerebellum that the team analyzed, for example, amounts to just 30 percent the size of the animal’s cortex.

“The fact that [the cerebellum] has such a large surface area speaks to the evolution of distinctively human behaviors and cognition,” says Sereno. “It has expanded so much that the folding patterns are very complex.”

As the study says, “Rather than coordinating sensory signals to execute expert physical movements, parts of the cerebellum may have been extended in humans to help coordinate fictive ‘conceptual movements,’ such as rapidly mentally rearranging a movement plan — or, in the fullness of time, perhaps even a mathematical equation.”

Sereno concludes, “The ‘little brain’ is quite the jack of all trades. Mapping the cerebellum will be an interesting new frontier for the next decade.”

Certain types of dogs seem to be more discerning than others, however.
Health

Economists show how welfare programs can turn a “profit”