As we go about our everyday lives — miraculously getting out of bed, somehow trudging through work, deciding what to eat for dinner — one fact remains quietly on the backburner: The robots are, indeed, coming.

For decades we’ve imagined these wire-comprised beings as glistening humanoids, the stiff yet endearing C-3PO and the enigmatic maschinenmensch Maria come to mind. However, as time has waxed on, and we’ve held our rudimentary conceptions of them up to the sun, strange new forms have refracted back.

Take, for instance, the oddly-shaped droids today being assembled — and vigorously tested — at Boston Dynamics. Alongside a four-wheeled, self-catapulting robot dubbed the Sand Flea (it’s relatively small), are two spunky machines called Spot (a wolf-like creation) and Wildcat. Their forms and movements are not anthropomorphic — rather, they’re directly inspired from animals.

Also among the company’s panoply of easy-striding robots is one called Handle who glides across the testing floor like a child propelling himself on a hoverboard — or, rather, a ballerina caught in a trance-like dance. Like some chimera — part human, part forklift — it twirls gracefully in that stomach-prickling realm known as the uncanny valley.

Still, an even stranger breed of machine is today being assembled by scientists from across the United States, from across the world. Its emergence will challenge what it means to be human. 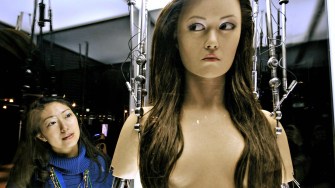 So, then, what on Earth can be stranger than a robot like Handle whose fluent movements seem to rival our own? Well, apart from the kaleidoscopic array of non-humanoid novelties bubbling up from engineers’ imaginations, robots that appear more like us — that is, not just humanesque in form, but who also begin to take on our likeness in texture. As we reported in 2011, we are “evolutionarily hard-wired” to reject entities that appear nearly human.

In short, robots that appear “barely” human — C-3PO, for instance — we like. Droids that look 95 percent human, however, are a different story.

Such robots are currently being developed and if, for the most part, they seem quite creepy to us, that is to be expected. According to the “uncanny valley” hypothesis, coined by robotics researcher Masahiro Mori more than 40 years ago, such creations, though fascinating, are liable to illicit “strong revulsion” from us, particularly in lone, one-on-one encounters, because they linger in a murky psychological realm in our minds

There are varied reasons why this response on our part snaps into action — from the general eeriness of the unknown to pathogen avoidance (the more human a robot looks, the more its defects signal possible disease). However, according to the same theory, as the machines reach 99.99 percent of human likeness, as they increasingly seem to be, it may not be so far-fetched to find ourselves becoming uncannily close to them.

Indeed, in Mori’s view, as the appearance of a robot becomes more and more indistinguishable from that of a human being, our emotional response to it becomes positive once more. This unique bell curve is perhaps, in part, why scientists are endeavoring to create robots that are nearly identical to humans. But they wouldn’t just be wielders of our likeness, they may, someday, also be fun to have drinks with.

A robot you can drink a beer with, and unwittingly shoot the breeze with, is currently considered to be the holy grail of artificial intelligence, vis-à-vis the Turing test. As we reported in 2017, MIT researchers have been developing ways in recent years to make a robot more likable for the purpose of us wanting to converse with it.

Such robots, however, who look like us and talk like us, beg the question whether we would establish emotional bonds to them.

Could you fall in love with this robot?

What the research suggests

Seeing as we already rarely see one another’s inner anatomy — when did you last peel back your friends’ skin and take a peek at their skeletons? — what lies beneath, in the case of engaging with robots, may linger in the back of our minds but be superseded by our immediate experiences with them. In other words, we may be perpetually distracted of their wiry innards by our conversations with such advanced robots.

However, even without the fancy wordplay endowed to supple-skinned robots through A.I., we may be suckers to believe they are something they are not.

Why? Because, as Harry Harlow’s controversial Monkey Love Experiments demonstrated in the 1950s, there’s an apish tendency to be partial toward “soft” and cuddly beings — even when they’re inanimate (think of children’s fondness to Teddy bears). In the experiments, Harlow found that when given a choice, infant monkeys always preferred surrogate mothers that were covered with soft terry cloth, as opposed to a bare-wire surrogate, despite the latter offering sustenance.

The little monkeys spent a great deal of time clasping on to the cuddly surrogates, “just as they would have with their real mothers.” So, can the same be said of humans? Well, we simply don’t know, exactly, but the research does seem to suggest — humans share 93 percent of DNA with rhesus — that we may share overlapping proclivities with our furry cousins. Primal ones. Perhaps our own children, as a more direct inference, may be particularly prone to developing emotional bonds to anthrobots.

If this is the case, such connections may ostensibly persist into adulthood.

The future has a way of laughing at you

What will happen when robots don curly hair and red lips? What will happen when they speak to us like friends? What happens when they become the strongest people we know? If we can become sentimentality connected to our favorite childhood toys — perhaps a doll that, though tattered by time, is still dear — what makes us think we will be immune to developing feelings — yes,feelings — for the inanimate yet animate companions that become part of our everyday lives?

On top of the fact that recent studies also suggest that we can, indeed, feel concern for robots we think are in pain, in this particular moment, when loneliness has become an increasingly felt epidemic, such robots may fill in some people’s social voids. If this is the case, humans “Netflix and chilling” with robots may not be a strange occurrence in the coming decades.

If we develop emotional relationships with these robots, as the recent research seems to suggest is possible, then this development is poised to challenge us on what it means to be human. Why? Because for millennia we have depended on other humans to derive connection, and meaning, in our daily lives. With new technology, we may be in for a future where a new kind of “mixed-type” relationship is part of our social mix.

Though still hypothetical, of course, one thing that can be said with confidence, tomorrow will soon be here, and with it, strange new realities that we currently cannot imagine — nonetheless grapple with — will become manifest.

Related
Hard Science
Some earthquakes last for seconds, others for minutes — and a few for decades
What do you call it when the Earth shakes for three decades?
Sponsored
What childhood “money story” is shaping your financial behaviors?
Here are the signs that you inherited “money anxiety” from your parents.
The Present
The “maritime Indiana Jones” who salvages shipwrecks now wants to tow icebergs
Simple physics makes hauling vast ice chunks thousands of miles fiendishly difficult — but not impossible.
Neuropsych
Inside the brains of aging dogs
In a citizen science project, thousands of pet dogs are helping scientists to understand what happens to memory and cognition in old age.
Neuropsych
The most common source of awe might surprise you
It’s us.
Up Next
Neuropsych
Toddlers engage more with print books than ebooks, developmental researchers say
Researchers find that toddlers verbalize and interact more with their parents when reading sessions feature print books, not tablets.