Humans could be marrying robots by 2050, claims robot expert

Author and robot expert Dr. David Levy explains how marriage with robots will come in the next several decades as technological and societal transformations take place. 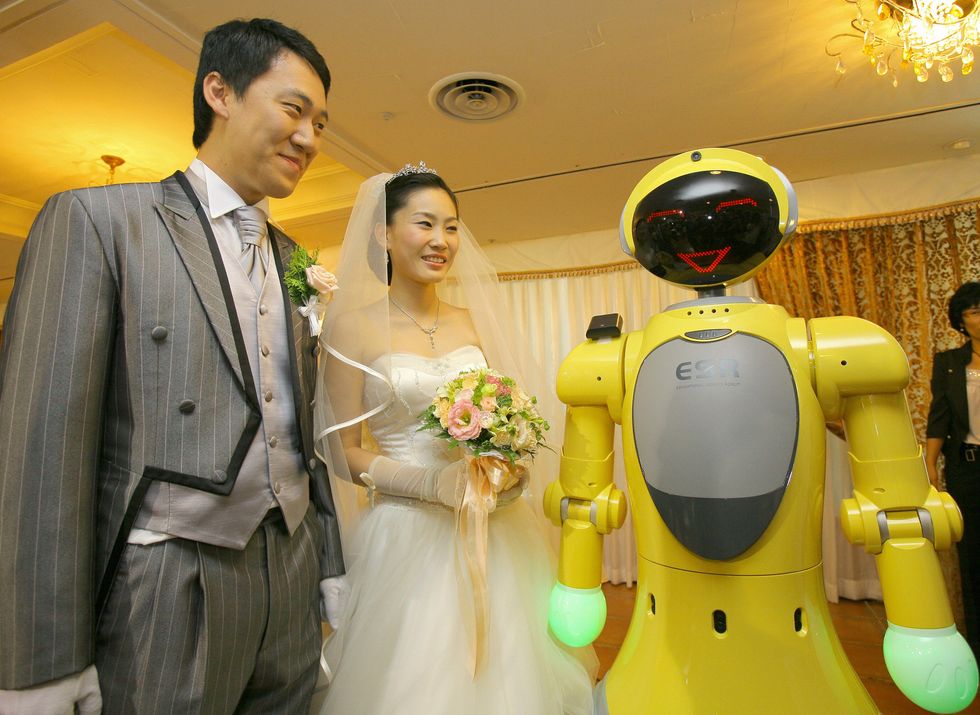 The pool of potential romantic partners is about to increase dramatically. Author and robot expert Dr. David Levy thinks that before 2050 we’ll be marrying robots.

“Sex and love with robots at a human level may appear to be a long way off, but the future has a way of laughing at you,” said Levy.

Speaking recently in London, Dr. Levy, author of the bestselling book ‘Love and Sex with Robots’, proposes that robots will have a number of advantages over human partners. They will be “enormously attractive” and feature advanced artificial intelligence that could adapt to you intellectually and sexually.

Like all our adaptations of technology, it might happen all of a sudden and could easily become commonplace.

“We’re being forced to contemplate what human-robot relationships will be like a generation or two from now,” he said. “As love and sex with robots becomes more commonplace, we should come face to face with the very real possibility of marriage with robots. When robots are sufficiently human-like, sufficiently appealing socially, to the point where they can act as our companions, why not extend that companionship to marriage if neither party is against the idea?”

But how will societies, already having a hard time dealing with human outsiders, adapt to such a transformational change?

“As more and more people come to accept the concepts of sex and love with robots, so societies will develop laws that govern human-robot relationships," stated Dr. Levy. "By the time there are no laws to prevent human-robot marriages, robots will be patient, kind, subjective, loving, interesting, truthful, persevering, respectful, uncomplaining, pleasant to talk to and showing a sense of humour. And the robots of the future will not be jealous, boastful, arrogant, rude, self-seeking or easily angered, unless of course you want them to be."

He does consider that there might be a civil-rights struggle for AI lifeforms initially but with time any restrictions “will begin to fall by the wayside just as laws preventing interracial marriage did in the 1960s and same sex marriage during did in the past decade.”

Given the advances in artificial intelligence technology, these might be met quite soon.

Cover photo: A Robot 'Tiro' acts as master of ceremonies at a wedding for Seok Gyeong-Jae (L), one of the engineers who designed it, and his bride in Daejeon, 130 kilometers (78 miles) south of Seoul, 17 June 2007.  AFP PHOTO/CHOI WON-SUK (Photo credit: CHOI WON-SUK/AFP/Getty Images)