Look into any toddler’s room. Some are decked out in home-team banners and sports paraphernalia, others in dinosaurs and star charts. What you’re seeing is less an extension of that toddler’s burgeoning personality, but more an alter to the parent’s dreams for that child’s future. But if there is one thing every toddler’s room needs, it’s a bookshelf overstuff with colorful spines, big-eyed characters, and dulcet rhymes.

The benefits of early reading are well-known. Reading assists in neurological development. It transmits a love of learning and promotes early academic success (setting the stage for later academic success). It helps maturate positive psychological traits such creativity, confidence, and empathy.

Tech-savvy parents looking to cutback the clutter and shrink that bookshelf into tablet form may want to reconsider. A study recently published in Pediatricshas found that toddlers interact more with print books than ebooks, and those print books will need somewhere to stay.

Analyzing the art of the read

The study’s objective was to see if parents and toddlers interacted differently while reading books in various formats. They gathered 37 parent-toddler pairs and had the parents read stories from the Little Critter series in back-to-back sessions, setting a 5-minute time limit for each.

They used a different format for each session: a print book, a basic ebook, and an enhanced ebook (one that comes with music, sound effects, and animated characters). The researchers recorded the sessions to observe the interactions between parent and toddler. These could include discussing the story, asking questions, collaborative reading, positive directions, and negative directions. The results suggest that toddlers are most engaged when reading a print book. They employed more book-related verbalizations and collaborated more in the process. This goes for parents, too. The adults engaged in more dialogue, asked more questions, and showed greater signs of bonding and sharing the experience with their child.

“The print book is really the gold standard in eliciting positive interactions between parents and their children,” Dr. Tiffany Munzer, the study’s first author and a fellow in developmental behavioral pediatrics at the University of Michigan C.S. Mott Children’s Hospital, told ABC News. “Parents know their children well and have to make it come alive for their child to create that magic.”

Such positive interactions were less frequent with ebooks. However, ebook did show more collaboration in format-specific directions — as in, “You have to swipe it like this” or “No, don’t touch that button.” In other words, the device itself became an impediment to developing a natural rhythm of learning and relationship.

Perri Klass, a pediatrician who co-wrote the study’s accompanying commentary, notes that earlier research has suggested ebook enhancements are disadvantageous for young children. They can diminish story engagement and obstruct text comprehension. This new study suggests that even basic ebooks can be problematic if parents are too busy engaging with the device, not their child.

This realization can be helpful for parents who feel assaulted by new technology promising their child a developmental head start and who lack the funds to experiment with every new gadget emerging in an already crowed market.

“You don’t need a lot of bells and whistles to support your child’s development,” Dr. Suzy Tomopoulos, assistant professor in the department of pediatrics at NYU School of Medicine, told the New York times. “Engaging the child and talking to the child does a wonderful job of supporting early child development.” 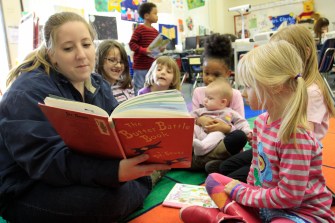 Americans seem to agree with Dr. Munzer that print books truly are the gold standard.

The Pew Research Center has been tracking American reading habits and preferences since 2011. It has found that Americans overwhelmingly prefer print books to other formats. According to its 2018 survey, 67 percent of Americans say they have read a print book in the past year, compared to 26 percent who say they have read an ebook. In total, “three-quarters of Americans (74 percent) have read a book in the past 12 months in any format, a figure that has remained largely unchanged since 2012.”

But that number becomes less encouraging when you consider that a quarter of Americans admit to not reading a single book. In any format. For 12 whole months. Yikes. And while three-quarters have read at least one book, the typical American only manages four books a year.

Not surprisingly, we don’t read a lot of books because we don’t make the time. According to a Bureau of Labor Statistics survey, Americans spent only 17 minutes a day (yes, that’s rounded up) in 2017 reading for purposes other than work or school. That number represents an all time low, and is roughly one-tenth the time Americans spend watching television.

If parents really want to teach their children to love reading and read well, print books are a great start. But taking the time to read to them and showing them your own love of reading are just as necessary.

If argumentation led to nothing, it would soon be thrown into the evolutionary dustbin.
The Present

Yes, there are reasons to worry about Twitter, but it’s not about the bots.
Thinking

Jokes so cheesy even French philosophers will love them.
Up Next
Health

One group of women still seem to benefit from the popular diet.