Here we go again. This weekend, British newspapers: The Telegraph, The Independent and The Metro (a paper given out free on public transport right across the United Kingdom) all ran with the same diabolically misinformed headline that, “Smartphones are making children borderline autistic.” 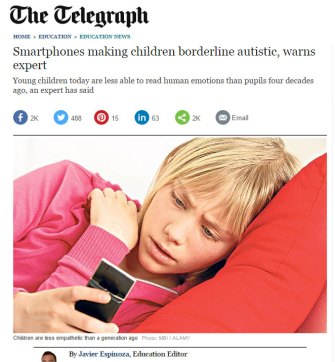 Ed Yong’s (justifiably profane) response sums up the feeling of anyone who has looked into headlines such as these before. The cheerleader for the “technology causes autism” hypothesis, professor Susan Greenfield has been handed smackdown after smackdown by experts in their fields including Dr. Ben Goldacre and professor Dorothy Bishop (and half of the scientists on Twitter). One particularly obvious flaw in Greenfield’s hypothesis was that autism appears long before children begin using computers (or smartphones for that matter) as Bishop explains:

“A cause has to precede its effect. This test of causality fails in two regards. First, demographically — the rise in autism diagnoses occurred well before internet use became widespread. Second, in individuals: Autism is typically evident by two years of age, long before children become avid users of Twitter or Facebook.”

He does however make a single, extraordinarily vague reference to “research done in the US within the last decade that shows a decrease in empathy among college students and at the same time a rise in narcissism,” but unhelpfully fails to provide any actual citation. Pedro De Bruyckere, a Ph.D student at the University of Antwerp, has tracked down the research that (we can only assume) McGilchrist must be referring to. Unsurprisingly, the research doesn’t even remotely support McGilchrist’s claim — according to this research, the vague trends that McGilchrist describes began way back in the ’80s — long before the mobile phone, let alone the smartphone!

Incidentally, an enormous study of 19,993 Swedish twins just published in the British Medical Journal, found no evidence of any recent increase in the symptoms that are commonly associated with autism, once again attributing the changes in autism prevalence to administrative changes in how we diagnose and register prevalence of autism; providing yet more evidence (as if we needed more evidence) that this whole affair is one big wild goose chase.

It’s almost as if history is repeating itself.

By studying the dwarf galaxy Wolf-Lundmark-Melotte ~3 million light-years away, JWST reveals the Universe’s star-forming history firsthand.
Up Next
Surprising Science

If It Scares, It Airs: How Alarmist News Coverage Does Real Harm

News coverage of risk that plays up how scary things sound and plays down or leaves out anything that moderates the fear does real and serious harm.