A story that made the rounds on Facebook claimed “Half of All Children Will Be Autistic by 2025, Warns Senior Research Scientist at MIT“. The research scientist in question was Stephanie Seneff, a computer scientist with no background in epidemiology, who gave a talk recently where she presented the following graph: 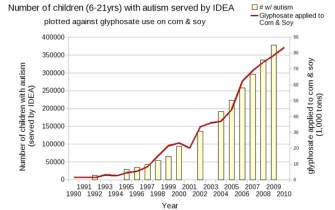 First things first. It doesn’t take a genius to spot that this is clearly a textbook case of correlation not implying causation. As David Gorski notes in his comprehensive debunking, the similar illusory correlation between autism and organic food sales, shown below, somewhat blows Seneff’s observation out of the water: 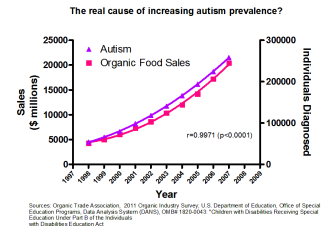 As for the headline claim that half of all children will be autistic by 2025, this claim blithely ignores the broad consensus that the increasing prevalence of autism is largely due to increasing rates of diagnosis and – as a new study has recently demonstrated changes in how autism is diagnosed. The baseless assumption that rates of autism diagnosis will continue into the stratosphere is dumbfounding. Gorski sums up the case well:

“Yes, she just extrapolates from current trends, assuming they’ll continue indefinitely! It’s almost as stupid as Julian Whitaker’s mind-blowingly idiotic extrapolation that predicted that 100% of boys will be autistic by 2031, with 100% of all girls autistic by 2041. Almost. It’s pretty close, though.

The bottom line is that the crank magnetism is strong in Dr. Seneff. She’s antivaccine and anti-GMO. She is full of Dunning-Kruger, thinking that she can transfer her computer science and artificial intelligence knowledge to knowledge of epidemiology, biochemistry, and medicine. She can’t.”

The two articles linked at the beginning of this post already have over one hundred thousand Facebook shares each. I’ll be interested to see how this post and Gorski’s debunking compare. I’m not filled with confidence – as we’ve previously seen – posts debunking misinformation typically crash and burn when compared to the runaway-train speed with which misinformation can travel.

There’s an extremely good chance that there is, or at least was, life on Mars. But is it native to Mars, or did it originate from Earth?
Up Next
Culture & Religion

Different people have very different dreams, but even across widely different cultures, the subjects we dream about are remarkably similar—and mostly very disturbing.