In most videogames, the higher up in levels you go the tougher the opposition gets. There’s nothing new in that. But what if video game’s bad guys evolved based on your personal style of game play? What if your actions served as a form of “natural” selection that favored their more successful characteristics and eliminated others? Some programmers see this as the way virtual villains will work in the future, and Polymorphic Leads has just released a new game, Darwin’s Demons, to demonstrate what this would be like.

Darwin’s Demons is an arcade-style game that’s similar to the classic Space Invaders. The big difference is those evolving bad guys. As you fight them, the bad guys you kill off — having not survived — don’t get to “reproduce.” Bad guys with successful traits do, and their offspring are therefore that much more difficult for you to dispatch. (Thankfully, reproduction is an offscreen thing that happens between levels.)

Survive if you can. (POLYMORPHIC LEADS)

In addition, each level has different gameplay than the one preceding it, and that allows each one to select for different characteristics depending on what skills of yours are called upon and what responses work for the invaders. At each successive level, your adversaries’ progeny thus keep getting better and better at winning, with a skill set more and more designed for defeating you personally.

The game was developed at the University of Idaho by biologist Barrie Robison and computer scientist Terence Soule. The duo see the introduction of evolutionary principle into video games as being as natural — and potentially successful — as the introduction of physics was. (Think Angry Birds.) They spoke recently to Inverse about their game.

Aside from the obvious — that evolution-based gaming will produce the optimal adversaries for each player — games like Darwin’s Demons may lead to some interesting new ideas about strategy. As they told Inverse, “Some very clever players — I mean these are like super, ultra gamers, and they knew it was an evolutionary game — set out to domesticate the aliens. They shot all of the nasty ones first and then they let the dumb ones that didn’t fire very much and just stayed up at the top and didn’t do anything live for a really long time. And, after several generations, they had [the equivalent of] space cows.” 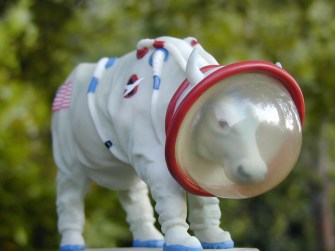 While Polymorphic is building-in safeguards against this sort of thing taking over a game, a little bit of this kind of strategy may be just the thing to buy a player some slack to get past a tough level. Polymorphic is hoping to see players regularly running their own evolutionary experiments. Of course this will require that they understand Darwinian principles.

Evolution in Darwin’s Demons is one-sided, though: Only the bad guys evolve, not the player. “The best biological approximation of what happens in our game is parasites and pathogens that attack long-lived species … The parasite and pathogens — their generation time is so fast — they’re evolving to adapt to a host that stays the same. And that’s really what we’re mimicking here.” Still, how awesome would it be if a players could start with their IRL selves, and set off on their own evolutionary journey as they battle ever-evolving Darwin’s Demons?

If you want a medication to kick in faster, lean right.
Up Next
High Culture

4 Ways the Food Industry Is Warping Our Psyches

Sean Curry takes aim at the rapidly evolving “gourmet” food industry that is warping our expectations, mindsets and first-world privilege to a scary new level.