It’s October, and with Halloween just a few days away, ’tis the season to enjoy a good scare. Pop culture overruns with monsters and miscreants looking to maim, maul, and otherwise gut hapless bystanders, and one reason we indulge in these terrors is that they can thrill us entirely within the realm of the imagined.

Imagined, that is, for us.

Many of our favorite frights existed in the natural world long before storytellers repackaged them for our entertainment. Stories we associate with creep shows play out every day, as animals utilize shocking capacities in an effort to survive and pass on their genes.

Nature is indeed red in tooth and claw, but turns out, teeth and claws are some of the more docile adaptations in the evolutionary arsenal. 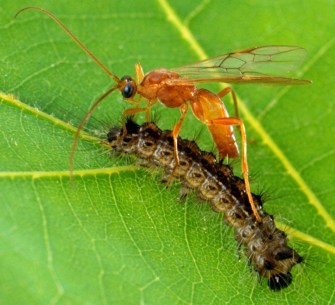 An ichneumon wasp lays its eggs inside a caterpillar.

In the movie Alien, the titular alien begins its lifecycle as a parasite embedded in a man’s chest before bursting forth in bloody fashion. If an ichneumon wasp could comprehend this scene, it would be flabbergasted — not by the violence but by the alien’s lack of efficiency.

The ichneumon wasp’s life cycle is strikingly similar to the alien’s. A female ichneumon seeks out a host for her young, usually a grub or caterpillar, and uses her syringe-like ovipositor to inject the creature with eggs. When the eggs hatch in their unwilling nursery, they begin devouring it from the inside out.

Unlike the alien, the ichneumon larvae’s approach is surgical. They leave essential organs like the heart for last in order to keep their host alive, and therefore fresher, longer.

In his essay Nonmoral Nature, Stephen Jay Gould notes that the ichneumon wasp was a major challenge for 19th-century naturalists trying to reconcile the notion of a benevolent God with the brutal realities of nature. No less than Charles Darwin, Gould cites, found the ichneumon as rendering the two ideas incompatible:

I own that I cannot see as plainly as others do, and as I should wish to do, evidence of design and beneficence on all sides of us. There seems to me too much misery in the world. I cannot persuade myself that a beneficent and omnipotent God would have designedly created the Ichneumonidae with the express intention of their feeding within the living bodies of caterpillars, or that a cat should play with mice. 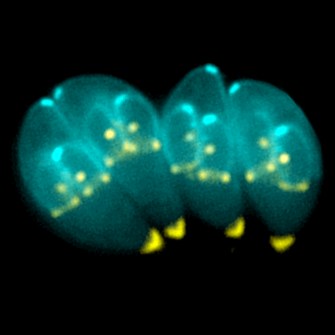 The slug-looking Toxoplasma gondii are basically extraterrestrial brainwashers living in our backyards.

Mind control is a darling fear for storytellers. The Cabinet of Dr. Caligari, arguably the first true horror movie, tells the story of a hypnotist who controls a somnambulist for murder. Robert A. Heinlein’s The Puppet Masters is about parasitic slugs from outer space that control their victims through their nervous systems. And let’s not forget how the Ludovico Technique made use of poor old Ludwig Van.

Interestingly, of pop culture’s many mind control methods, Heinlein may have come the closest to reality — that is, if you’re a rat.

Rats typically avoid smells of cat urine (for obvious reasons). But when afflicted with Toxoplasma gondii, slug-looking protozoans, the rat’s limbic system becomes rewired. T. gondii not only represses the rat’s natural fear of cat urine but replaces it with urges of sexual attraction. The rat is driven to seek out the odor in the hope to procreate, but comes face-to-face with a predator instead.

Why does T. gondii seek to end its host’s life? Because these microorganisms can only reproduce sexually within a cat’s intestinal tract.

While T. gondii can afflict most warm-blooded animals as intermediate hosts, headlines stating that cats can control your mind are pure sensationalism. Scientific studies have found little evidence between Toxoplasmosis and psychiatric disorders in humans. Most infected people suffer only flu-like symptoms, although the disease is more dangerous for pregnant women and those with weakened immune systems. 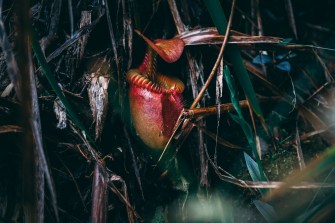 In Little Shop of Horrors, Seymour Krelborn becomes the custodian of Audrey II, an extraterrestrial plant with a voracious appetite for human flesh. Of course, carnivorous plants are nothing new. Venus flytraps, pitcher plants, and Cape sundews can be found at most any garden nursery, and they tend to feed on insects rather than sadistic dentists.

But some carnivorous plants have stepped up their culinary game and taken a liking to the taste of mammals. Nepenthes attenboroughii, a giant pitcher plant named after Sir David Attenborough, is one such plant.

Living on Mount Victoria in the Philippines, this plant spends its days waiting for an insect or rodent to stumble into its pitcher. The unlucky critter can’t gain traction on the plant’s slippery petals. With escape impossible it is slowly digested, its dissolved flesh consumed by the plant.

While mammal-eating plants are certainly the exception to the rule, that’s cold comfort for the poor rodent that stumbles across Nepenthes attenboroughii. 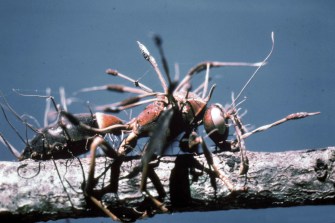 An ant with Cordyceps sprouting from its body.

In the video game The Last of Us, players fight through their umpteenth zombie apocalypse this decade, but this undead army proves different than previous ones. The game swarms with zombies controlled by a fungus that grotesquely erupts from bodies as though they are made of rotting wood. And this fungal invader is based on the real-life genus Cordyceps.

One species of Cordyceps, Ophicordyceps unilateralis, afflicts ants in tropical rainforests. Once the parasitic fungus enters a host, it takes over the creature’s mind. The fungus then zombifies the ant, controlling it to climb high above the colony to a twig or the underside of a leaf.

There, it kills the ant and takes root in the corpse. After its fungal body then sprouts, it douses the colony in its spores. If the colony is unable to extract the infected, a miniature zombie apocalypse plays out on the jungle floor.

Other species of Cordyceps specialize in different insects, such as grasshoppers, wasps, and tarantulas, and at least one has found its way to the United States. 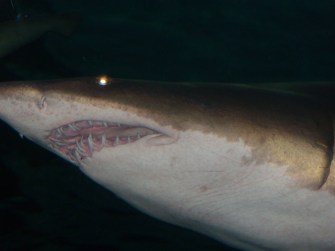 This sand tiger shark was a killer before it was born.

Cannibalism was the de rigueur of low budget horror in the ’70s and ’80s. The Texas Chainsaw Massacre is perhaps the most famous example, but the era’s offerings are replete with titles like Cannibal Girls, Cannibal Terror, Cannibal Holocaust, and Slave of the Cannibal God.

The natural world, however, has far fewer scruples over cannibalism than B-movie directors.

Take the spadefoot frog. These amphibians live in the U.S. Southwest and lay their eggs in rare desert pools. While these pools sport few predators, they lack nutrients and evaporate quickly in the heat. To survive, the tadpoles must develop into toadlets and escape their barren nurseries in as little as a week.

The survivors manage this feat by cannibalizing their smaller pond mates and secreting a growth inhibitor that stunts the competition. The evolutionary winners emerge from the pond to renew the ghastly cycle, their bellies filled with their would-be brothers and sisters.

And the spadefoot frog is hardly the extreme in sibling rivalry. Sand tiger sharks nosh on their siblings in utero, and female tiger sharks give birth to just two offspring at a time (one from each uterus). This intrauterine Hunger Games ensures that only the strongest, most aggressive babies survive to be born.

“Until recently, scientists thought cannibalism was a rare response to starvation or other extreme stress,” writes Bill Schutt, author of Cannibalism: A Perfectly Natural History. “Well-known cannibals like the praying mantis and black widow spider were considered bizarre exceptions. But now, we know they more or less represent the rule.”

This article a bit of natural history colored in the spirit of Halloween, but to conclude, we should probably take a step back and recognize the anthropocentricism of the exercise. While we can’t help but shutter at these evolutionary adaptations, that’s because our minds are equipped to view them in terms of human values and experiences. Our minds are, after all, human ones.

Going back to Gould and his survey of the ichneumon, this tendency seems both inappropriate yet inescapable. Gould writes, “We cannot render this corner of natural history as anything but story, combining the themes of grim horror and fascination” even as “we acknowledge that we may be witnessing little more than automatic instinct or physiological reaction.”

These evolutionary penny dreadfuls even provide benefits to us, usually in the form of pest control. Ichneumon wasps are harmless to people and typically target a specific host, so they can be used by farmers as an environmental form of pest control. While we feel sorry for the rat housing T. gondii, it’s worth remembering that rodents can directly transmit a bevy of diseases. And some species of Cordyceps have medicinal value.

Still, it’s hard not to feel a twinge of horror at the realization of just how scary mother nature can be.

Mycobacterium leprae, the bacteria that cause leprosy, have the surprising ability to grow and reverse aging in armadillo livers.
Up Next
Starts With A Bang

Hubble, even at its best, only reveals perhaps 10% of what’s out there. Here’s how we get the rest.When you gaze up at the night sky, through the veil of stars […]