America loves its straight-line borders. The only U.S. state without one is Hawaii – for obvious reasons (1).

West of the Mississippi, states are bigger, emptier and boxier than back East. From a distance, all seem to be made up of straight lines.

Only when you zoom in do you see their squiggly bits: the northeast corner of Kansas, for instance. Or Montana’s western border with Idaho that looks like a human face. Or Oklahoma’s southern border with Texas, meandering as it follows the Red River.

New Mexico comes tantalisingly close to having only straight-line borders. There’s that short stretch north of El Paso that would have been just 15 miles (24 km) long if it was straight instead of wavy.

No, there are only three states whose borders are entirely made up of straight lines: Utah, which would have been a rectangle if Wyoming hadn’t bitten a chunk out of its northeastern corner; Wyoming itself; plus Colorado. 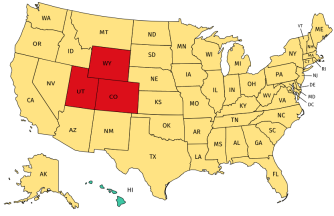 Except that they aren’t. For two distinct reasons: because the earth is round, and because those 19th-century surveyors laying out state borders made mistakes.

Congress defined the borders of Colorado as a geospherical rectangle, stretching from 37°N to 41°N latitude, and from 25°W to 32°W longitude (2). While lines of latitude run in parallel circles that don’t meet, lines of longitude converge at the poles.

Which means that Colorado’s longitudinal borders are slightly further apart in the south. So if you’d look closely enough, the state resembles an isosceles trapezoid (3) rather than a rectangle. Consequently, the state’s northern borderline is about 22 miles (35 km) shorter than its southern one. The same goes, mutatis mutandis, for Wyoming.

That’s not where the story ends. There’s boundary delimitation: the theoretical description of a border, as described above. But what’s more relevant is boundary demarcation: surveying and marking out the border on the ground. Colorado entered the Union in 1876.

Only in 1879 did the first boundary survey team get around to translating Congress’s abstract into actual boundary markers. The official border would not be the delimited one, but the demarcated one. Unfortunately, 19th-century surveyors lacked satellites and other high-precision measurement tools.

Let’s not be too harsh: considering the size of the task and the limitation of their tools — magnetic compasses and metal chains — they did an incredible job. They had to stake straight lines irrespective of terrain, often through inhospitable land.

But yes, errors were made — and were in fact quite habitual. Take for example the 49th parallel, which for more than 1,200 miles forms the international border between the U.S. and Canada. Rather than being a straight line, it zigzags between the 912 boundary monuments established by successive teams of surveyors (the last ones in 1872–4). The markers deviate by as much as 575 feet north and 784 feet south of the actual parallel line. 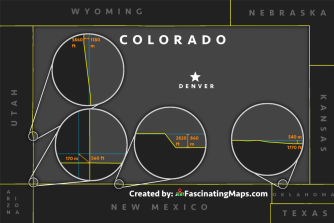 Colorado, not as rectangular as you think. Image: FascinatingMaps.com

The same kind of thing happened when the first surveying teams went out to demarcate the Colorado border. This map magnifies four of the most egregious surveying inaccuracies, where the difference between the boundaries delineated by Congress and the border demarcated by the surveyors is greatest. 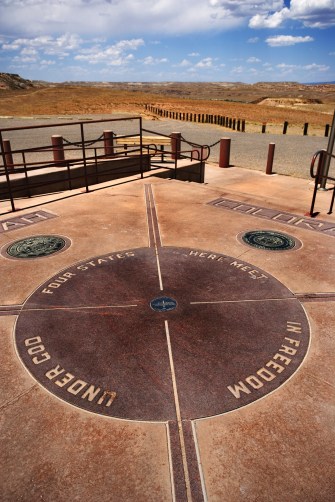 Located in a dusty, desolate corner of the desert, the Four Corners monument seems very far from the middle of anything. Yet this is the meeting point of four states: Utah, Colorado, New Mexico and Arizona. It is the only quadripoint in the United States (4). The monument’s exact location is at 36°59’56″N, 109°02’43″W.

However, it’s not where Congress had decreed the four states to meet. That point is about 560 feet (170 m) northwest of the quadripoint’s current location, at 37°N, 109°02’48″W. Did you drive all the way through the desert to miss the actual point by a few hundred feet?

No, you didn’t: in 1925, the Supreme Court ruled that the borders as surveyed were the correct ones. But perhaps the original quadripoint deserves a small marker of its own, if only to provide the site with an extra attraction. Or why not go for three? Some sources say the original point deviates by 1,807 feet (551 m). In 1879, a survey party marched north from Four Corners, placing markers at every mile. The surveyors eventually reached the Wyoming border, but not where they thought they’d end up. Later surveys, in 1885 and 1893, found out where the original surveyors had gone wrong, but by that time the border as surveyed had become the official one. Changing it would have required both Colorado and Utah to agree on a solution, and Congress to approve it. 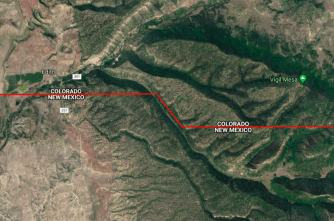 West to east, Colorado’s border with New Mexico starts out fairly straight. However, just east of Edith, the border swerves southeast for about 3,400 feet (1 km) before resuming its course due east, now 2,820 feet (860 m) further south than before.

Why? It seems that for once, the surveyors have given in to the dictates of topography: the deviation follows a small valley oriented northwest-southeast. 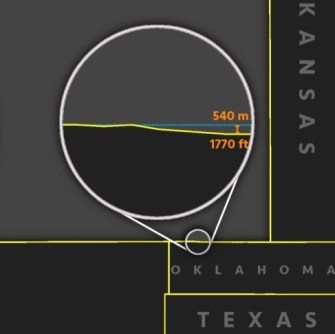 Almost at the end of their surveying mission, it seems the party lost the plot again. In the last 53 miles (85 km) before the border turns north, the stretch where Colorado rubs against Oklahoma, the line again swerves to the south, by as much as 1,770 feet (540 m).

Don’t blame the terrain: appropriately for a place so close to the Oklahoma Panhandle, it’s as flat as a pancake. Perhaps the surveyors were confused by the very featurelessness of the place. 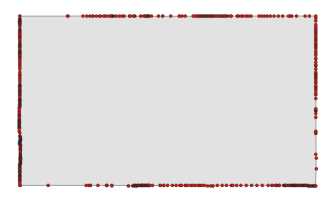 Each dot is a twist in Colorado’s supposedly straight borders. Image source: FascinatingMaps.com

These are just four of the biggest, most easily spotted surveying errors. In total, Colorado’s borders have hundreds twists and turns — most much smaller than the Big Four. Here they are: every dot on is a border deviation, as indicated on the OpenStreetMap of Colorado.

Accordingly, the state has not just four sides, but a total of 697 sides. So if Colorado is not a rectangle, what is it? Well, not a pentagon, (Greek for 5-sider), hexagon (6-sider) or a heptagon (7-sider), but a — hold on to something — hexahectaenneacontakaiheptagon (697-sider). 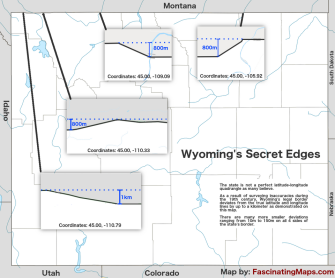 Wyoming: just as fallible as Colorado — but more willing to admit its mistakes. Image source: FascinatingMaps.com

Don’t get your hopes up, Wyoming

With Colorado thoroughly disqualified to as one of America’s two truly rectangular states, does that leave Wyoming holding the crown all on its own? Nope. Turns out the surveyors who plotted the Equality State’s outline were just as fallible as the Colorado set.

This map shows a few larger ones of the many deviations in on all four sides of Wyoming. Interestingly, the deviations shown come in pairs, whereby the second ones seem to correct the deviation of the first ones.

So, while Wyoming is just as imperfect as Colorado, it does seem that at least it is better at admitting (and correcting) its mistakes than its southern neighbor.

Maps of Colorado and Wyoming both by FascinatingMaps.com.

(1) If you’re not into the whole obviousness thing: Hawaii is a bunch of islands, which therefore don’t have a land border — neither with other U.S. states or third countries.

(2) That’s west of the Washington Meridian — the third one, to be exact. Over time, four Washington meridians were defined as prime meridians for the U.S. They passed through the Capitol, the White House, the Old Naval Observatory and the New Naval Observatory. Defined by Congress in 1850 at 77°2’48.0″W of Greenwich, the third Washington meridian was used as the base line for a number of western state borders, including:

Defined from the now standard Greenwich Meridian, the eastern and western extremities of Colorado are 102°2’48″W to 109°2’48″W, respectively

(3) An isosceles trapezoid is a four-sided shape with two parallel sides and two non-parallel but equal sides.

(4) The only state-level quadripoint. There are, in fact, dozens of quadripoints between U.S. counties, hundreds between U.S. municipalities, and indeed thousands (of usually bilateral ones) on the edges of checkerboard-patterned Indian reservations and other federally reserved territories.

The first human that isn’t an Earthling could be in our lifetime.
▸
5 min
—
with
Robert Curbeam
The Past

The forgotten voyagers of ancient Greece, China, and Scandinavia

Only 2% of Alzheimer’s is 100% genetic. The rest is up to your daily habits.
▸
9 min
—
with
Lisa Genova
Up Next
Starts With A Bang

What Was It Like When The First Supermassive Black Holes Formed?

These cosmic behemoths were enormous from very early times. Here’s how they came to be.One of the biggest challenges for modern astrophysics is to describe how the Universe went from a […]