Of course, every country is unique. But only America is extraordinary. That is the thumbnail definition of ‘American exceptionalism’, and it leaves enough room to spin it either way—good or bad.

America as a beacon of democracy and liberty, with the unique mission to spread both across the globe; or an oppressive hegemon, the armed wing of a capitalist ideology destroying all souls, lives and ecosystems that come before it.

As the rest of the world catches up to the U.S., economically, militarily and in other ways, the theory of American exceptionalism is losing adherents. Perhaps America is neither the best or the worst country in the world.

Be that as it may, these maps are a reminder that the U.S. is still a very different place from other countries around the globe. 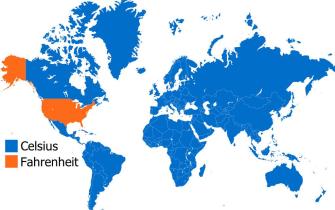 “Oh God, I forgot about the Americans,” cries Celsius, in this imagined dialogue with Fahrenheit. Yes, his system may have logic on its side and be practised by almost (1) all other nations on the planet, yet the U.S. stubbornly sticks to a scale based on “the freezing point of a mixture of ammonium chloride brine” on one side, and “the approximate temperature of the human body” on the other.

The Celsius scale—zero when water freezes, a hundred when it boils—is easier to remember than the Fahrenheit scale. To convert °F to °C, subtract 32 then multiply by 5/9. For example, 77°F is 25°C.

It’s not that America hasn’t tried. But perhaps it hasn’t tried hard enough. Congress passed the Metric Conversion Act back in 1975, however, the Act counted on a ‘voluntary’ transition as people got more used to the Celsius scale. Clearly, that hasn’t happened. 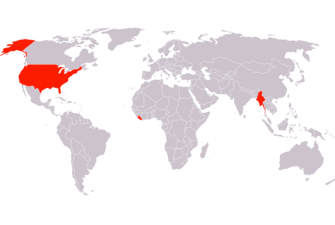 Americans think in inches, yards and miles. The rest of the planet—or nearly all of it—has adopted the International System of Units and thinks in centimetres, metres and kilometres (and kilos instead of pounds). The only other exceptions are Liberia and Burma/Myanmar.

Curiously, the U.S. does have a Metric Programme—until recently, it had just one employee. One of the many objections to introducing the metric system in the U.S.: it would give the Soviet Union a great chance to invade. 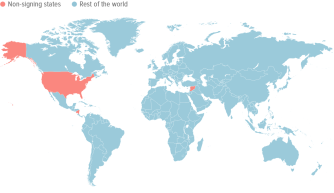 Last June, President Trump controversially announced the withdrawal of the U.S. from the Paris Climate Agreement, which aims to limit greenhouse gas emissions in order to minimize the average global temperature increase to 1.5°C. There are only two other countries that have not signed up to the deal: Nicaragua (for which the deal did not go far enough) and Syria (in the midst of a civil war). 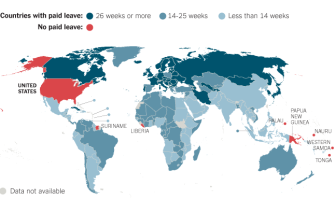 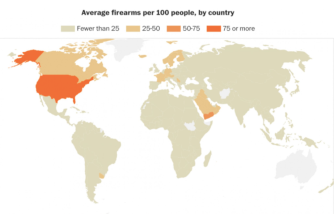 Perhaps you’ve noticed a pattern emerging. Put together, it seems like these maps are ganging up on America. Stupid Americans, for sticking to imperial weights and measures, and Fahrenheit instead of Celsius. Dangerous Americans, with all those guns. Selfish Americans, leaving the Paris Agreement. Poor Americans, without paid maternal leave. It’s almost as if being the exception is something bad. But America can still do great things that no other nation can. Like: putting a man on the Moon. Or if that’s a bit too far ago for your taste: launching a Tesla into space. 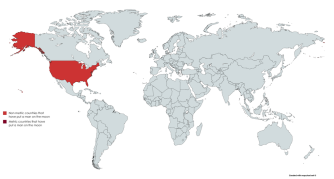 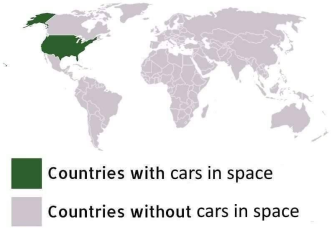 (1) Fahrenheit is used as the official temperature scale only in the U.S., the Bahamas, Belize and the Cayman Islands.

(2) To be fair, a few countries with no data are likely candidates for high firearms-per-capita ratios, notably South Sudan and Afghanistan.

For the first time in nearly 1500 years, fewer than half the people in England and Wales consider themselves Christian.
Up Next
Starts With A Bang

There are no punches to pull here. If America believes in science, research, or basic truths about the Universe, we cannot cancel this mission.Last week, the White House released their plans […]