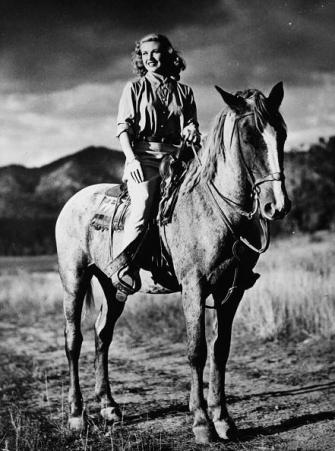 Dancer and actress Ginger Rogers on horseback in Hollywood, 1937. Perhaps her galloping around town is why there are so many horses on this map. Credit: Keystone Features/Hulton Archive/Getty Images

If maps allow our imagination to travel without care or trouble, then maps of the past do one better: they are time machines into a different era. And pictorial maps, which offer the perspective and subjective detail that mere road maps or city plans don’t, add a bit of couleur locale as extra seasoning. Like this one, of Hollywood in its Golden Age.

The humming of 1930s Hollywood street life almost bursts off the page – this is the age of the talkies, after all. 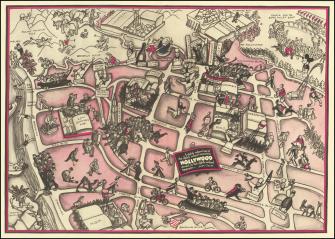 Chicago native Groth (1908-1988) was a cartoonist who became art director of Esquire in his twenties. He would go on to have a brilliant career as a war artist for the Chicago Sun. In 1944, he rode the first Allied jeep into newly liberated Paris. If he’d be any closer to the front, “he would have had to have sat in the Kraut’s lap,” joked Ernest Hemingway.

After WWII, he reported from Korea, the Belgian Congo, and Vietnam, among other places. But back in 1937, when he produced this map of Hollywood for Stage magazine, that was all still in the future. 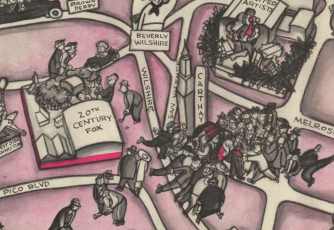 The 1930s was a time when Hollywood was dominated by the old studio system. Old? That’s relative. To be fair, many of their names still sound familiar today. 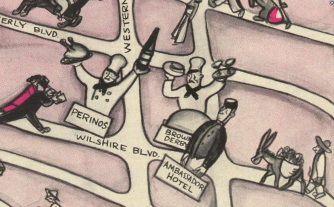 If you liked fine dining, there were worse places to be than Golden-Age Hollywood. 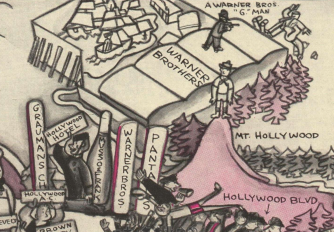 Warner Brothers is organising a sea battle in the back lot.Credit: Public domain, via David Rumsey Map Collection.

Even outside the glamour of the studios and the high life of fine dining, Hollywood is portrayed as a city of leisure and entertainment. 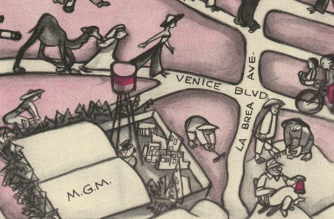 Chinese laborers digging away behind the back of a movie director. Credit: Public domain, via David Rumsey Map Collection.

In the northeast corner, the Santa Anita racetrack is giving punters a run for their money – literally. Closer by, Mickey Mouse waves to passers-by from his home on Riverside Drive, not far from a well spouting oil. Huge crowds gather at the American Legion stadium in the center. Elegant ladies and gentlemen striding around town complete the picture of a city as elegant and attractive as any in the world.

Yet Groth wouldn’t be a perceptive–or ‘cockeyed’–observer if he didn’t also look beyond the glamour. Check the bottom right for a Native American couple and their child making their way into Hollywood, looking for opportunity. Two streets down, a Mexican immigrant is doing the same, his donkey laden with wares he will be hoping to sell. And on the corner of La Brea and Venice, Chinese laborers are moving earth right behind the back of a movie director, seated in the classic folding chair, loudspeaker in hand.

All these figures are placed near the edge of the map, a textbook demonstration of what it means to be ‘marginal’.

Map in the public domain; found here at the David Rumsey Map Collection.

Tags
entertainmentfilmhistoryhollywoodmapsmoviesunited states
In this article
entertainmentfilmhistoryhollywoodmapsmoviesunited states
Related
The Past
The Wild West was lawless and chaotic — and the police helped keep it that way
Lawmen and outlaws were often the same people.
Thinking
6 great philosophers and how they used their political power
Most philosophers merely contemplate the world, but what about the ones who actually tried to change it?
The Past
Ancient migration: Bering Strait land bridge from Asia to North America was not a one-way road
Ancient humans crossed the Bering Strait land bridge from Asia into North America. But some of them went back.
High Culture
Did Paul Cézanne hide an early self-portrait underneath a 160-year-old still life?
To answer that question, we may have to figure out when the famed painter started to go bald.
Strange Maps
Dutch government releases a genuine treasure map from WWII, sparking a hunt for the loot
X marks the spot. The Dutch town of Ommeren has been swamped by detectorists armed with shovels looking for $20-million treasure.
Up Next
The Present
Gain unlimited access to Scopio’s quality stock photography for $29
This female-founded brand made Forbes 30 Under 30 list this year for its diverse, authentic, and affordable stock photography.