When the wise men of Europe’s Far North want to see beyond the merely visible, they bang their noid drums (1) until the rhythm and concomitant incantations prise open the creaky doors of perception.

The skin that forms the membrane of their drums is decorated with cryptic symbols that constitute a symbolic landscape. On this mental map is placed a piece of bone, which dances across the membrane as the shaman bangs the drum’s frame. It is his job to translate the bone’s erratic hopscotchery across this magical universe into meaningful comments on events past, present and future.

These rituals are reminiscent of other pagan divinations that distill meaning from randomness – be it by the reading of tea leaves, tarot cards or bird entrails. They also resemble the path from extasy to clarity popular in the continuum of shamanic cultures circling the Arctic, of which the Saami (2) form an integral part. 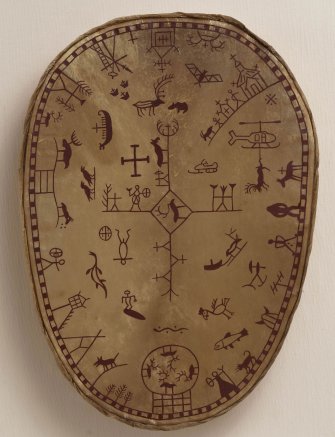 The Saami are the indigenous people of Northern Europe, a living remnant of the continent’s nomadic prehistory. Now numbering, by most accounts, less than 200,000, they are spread across the northern parts of Norway, Sweden, Finland and Russia in an area known as Sápmi.(3)

Historically, shamen played a central part in Saami life. They were reputed to mediate between Heaven and Earth, possess magical powers over wind and other elements, and be able to shapeshift and visit Jábmeájmoo, the Land of the Dead. When Christianity arrived in the High North – late, in the 17th century – shamen bore the brunt of the combined church-state assault on Saami independence. Noid drums were singled out as instruments of the Devil, and most of them were destroyed.

This drum is a recent build, made by Californian artist Jeffrey Vallance under the direction of a Swedish craftsman of shamanic descent. The eradication of Saami religion may have been quasi total, yet some of the old magic still lingers. As Mr Vallance says, “[craftsman Mikael] Pirak warned me to be careful of opening certain ‘doors’, as there are some very dark powers lurking out there.” Mind how you drum, then!

The cryptic symbols on Mr Vallance’s drum reflect the Saami shamanic universe, filtered through his own life’s story: his noid map is a mix of ancient Northern European lore and Californian surfer culture.

At the centre of the drum membrane is a cross-tree, with at its diamond-shaped centre Mandash-pyrre, the mythical reindeer that with its shiny golden antlers also was a sun symbol. The centrality of reindeer is no coincidence, as Saami survival was intertwined with, and indeed dependent on, the life and migrations of these herds.

On the northern branch, symbols show (bottom to top) a stick figure with a bow chasing a reindeer (symbolising the hunt), and a cross between antlers (referring to the North Star, and Saint Hubert who was blinded and converted by such a cross while stag-hunting in the Ardennes).

On the eastern branch, we have the three-horned wind god, the southern branch is dominated by three wise men, and the western one by a shield-wielding figure symbolising Luck, and a tree-hugging one signifying the Earthly Realm.

The northwestern quarter of the map in its entirety symbolises the Earthly Realm. Its horizon is dotted, north to west, with symbols for a Christian cemetery (the cross), the Passion (the True Cross, the Holy Lance, the Sacred Sponge and the Actual Ladder), and spring (the God of First Greening, holding two sprouting plants). A wild reindeer, and a sort of scale balancing and elk and a berry-eating goat represent the Saami’s fixation with the animals that provide much of their livelihood.

Away from the northwestern horizon, the three crowns stand for the Swedish monarchy (the same symbol can be seen on Swedish air force jets) and the long boat represents the Vikings, with whom the Saami share some history. Also portrayed are the prophetic ravens Huginn and Muninn. Filling out the northwestern quadrant are a cross-shaped hex sign, and a reindeer (battling a sacred bear shown in the northeastern quadrant).

That northeastern quarter is the Heavenly Realm, and its horizon contains a Holy Place with sacrificial reindeer antlers (next to the top of the map), and a bit to the south two churches and a bunch of crosses that symbolise the Christian Path. Showing how intertwined both cultures have become, the cross just below is again a hex sign. And the horse with the cross jutting out of its back is either the (Christian) Horseman of the Apocalypse, or an even more prototypical Pale Horse of Death. A snow scooter, a Tongan bat and a helicopter flying reindeer meat to market complete this quadrant.

The southeastern quadrant represents the Underworld, and is decorated with a Wildman,(4) a Defecating Man, an antenna symbolising modern media, a Viking helmet symbolising a more ancient way of communication, and a female shaman with her feline familiar. A man skiing, a reindeer pulling a shaman to the underworld,(5) plus a hen and salmon complete the southeastern quadrant.

The southwestern quadrant shows on its horizon a drumming shaman, a storage room built on stilts (presumably typical of Sapmi), a tent (not unlike Native American wigwams), a dog (devilish or not), and a bunch of trees.(6) Inside the quadrant are a surfer, a sea monster (à la Loch Ness, although the Saami have similar traditions),(7) a shaman’s snake and a shaman in trance next to a noid drum.

Finally, the south of the map is dominated by a corral of reindeer while at the north of it sits a cathedral, or God the Father Himself.

In the rather likely event that you lack a noid drum, just looking at this magical landscape nevertheless allows some speculation on the strange, psychedelic trips undertaken by the shamen of the High North.

Many thanks to Mr Vallance for sending in this map and providing it with some context. Visit this intriguing artist’s Wikipedia page for more information. See also his own webpage here.

(2) Formerly known as Lapps, this people is now more often referred to as Saami. Although the origin of the term ‘Lapp’ is unclear, it has acquired a negative connotation now avoided by the use of the native ethnonym. Compare Eskimo/Inuit.

(4) An unkempt, unjovial figure prefiguring Santa Claus, but also related to Snömannen, literally the Snowman, whose legend can be seen as a Scandinavian take on the Yeti meme.

(5) Or, if you’re not into the whole individuality thing, a forest.

Catholics Were the Muslims of the 19th Century