We travel the globe to marvel at the world’s diversity; but we dare not ask ourselves the question that negates the time and money we spent to get there: Why does every place look so much like any other place?

All high streets and shopping malls are slightly rearranged versions of each other. Cities have rich and poor areas; big cities have financial quarters and ethnic enclaves. All cities have clogged traffic arteries, post-industrial pockets of hipness, and districts that hate each other’s guts for no other reason than that they’re across the river from each other, or on opposite sides of the tracks.

Much of this sameness is the result of the homogenising power of globalisation. But part of it goes deeper, and is much older. In “Big Dome,” his 1999 essay on London, the writer Will Self invokes the French anthropologist Claude Lévi-Strauss, “(who) said that all world cities are constructed on an east-to-west schema, with the poor in the east and the rich in the west. Some ascribe this to the prevalent winds; the poor, as it were, being swept into the gutter. I think Claude saw it as a deeper structural phenomenon than this; humanity displaying some of the instinctive, orienting behaviour of the social insects.” 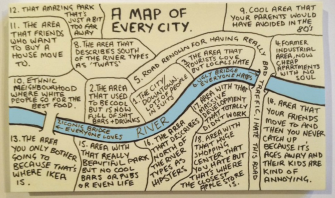 That would explain why this generic map of Every City looks so familiar — and is so funny. If you live or have lived in a big city, I bet you’ll recognise most of these places. Where do they remind you of?

Many thanks to Robert Capiot for sending in this map, found here on ShortList. Map produced by Chaz Hutton. Check out a treasure trove of Chaz’s (other) hilarious cartoons/infographics on his Instagram.

Related
Starts With A Bang
The galaxy cluster that broke modified gravity
19 years ago, the Bullet Cluster provided an empirical proof for dark matter. Even today, modified gravity still can’t explain it.
Neuropsych
Psychology studies that go viral are likelier to be bogus
A new 20-year analysis of over 14,000 psychology studies finds that a study’s media coverage is negatively linked to its replicability.
The Future
How a device transmits radio waves with almost no power
Apart from the energy needed to flip the switch, no other energy is needed to transmit the information.
The Present
Radical idea: Redraw the U.S. map as a nation of city-states
While cities drive national economic growth, their political geography means they cannot effectively deal with inequality, poverty, and other socioeconomic problems.
The Learning Curve
Why do high IQ people stagnate in their careers? Emotional intelligence
Research suggests that emotional intelligence is more vital for success than IQ.
Up Next
Culture & Religion
President Bloomberg? How Bloomberg Could Win — With Slightly Different Voting Rules
Could Michael Bloomberg actually win? Or should he spend his billions on fixing our broken electoral system instead?