Facebook and Instagram are introducing new tools that let mobile users track and manage how they spend time on their apps, like a timer that reminds you when you’ve hit a self-imposed app use time limit, and an option to limit notifications. 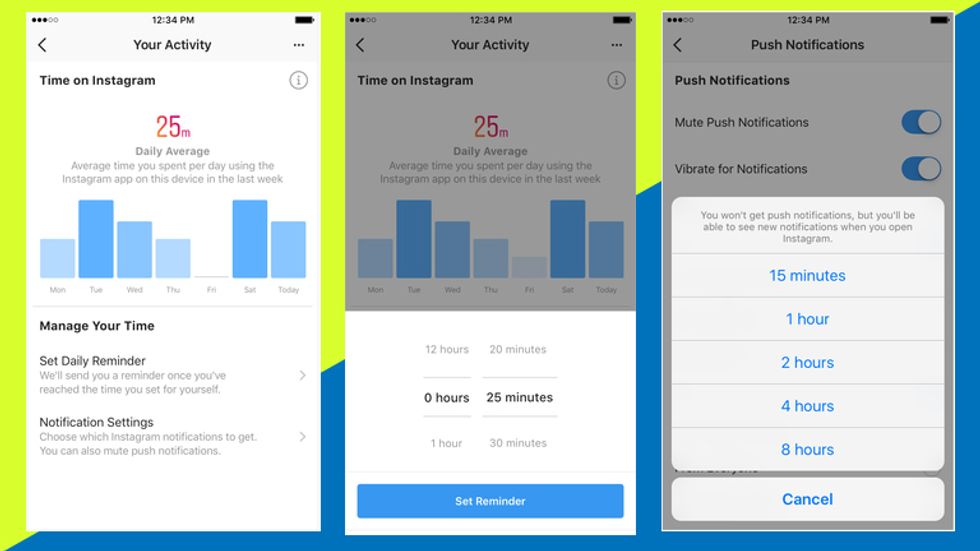 Facebook and Instagram are introducing new tools that let mobile users track and manage how they spend time on social media.

“We developed these tools based on collaboration and inspiration from leading mental health experts and organizations, academics, our own extensive research and feedback from our community,” reads a press release from Facebook.

Desktop users won’t have access to the features, and neither will 1 percent of Facebook users who were selected to serve as a comparative group, the company said.

“It’s really important for people who use Instagram and Facebook that the time they spend with us is time well spent,” he told reporters on a conference call. “There may be some trade-off with other metrics for the company and that’s a trade-off we’re willing to live with, because in the longer term we think this is important to the community and we’re willing to invest in it.”

The tools mark the latest development in Facebook’s effort to deal with a growing body of research showing how social media can be harmful to mental health. It’s a problem the company first tackled publicly in 2017 with a blog post titled ‘Hard Questions: Is Spending Time on Social Media Bad for Us?’

The answer seems to be, mostly, yes.

Studies show that using social media to interact with friends and family is often a positive experience, but mindlessly scrolling through—or ‘passive consuming’—a newsfeed can leave us feeling sad or anxious, possibly because we end up comparing ourselves to others we deem more successful.

Other studies have demonstrated links between phone addiction and increased rates of anxiety and depression. According to a 2017 study from Deloitte, for instance, 47 percent of smartphone users have at one point attempted to cut back on phone use. The same amount of Americans say they couldn’t live without their smartphones.

Facebook isn’t the only company building wellness features into its platform. In May, Google announced a new suite of ‘digital well-being’ features, including charts that show you a breakdown of how much you use each app, the number of notifications you’ve received and how much time you spend on your phone.

Apple also recently announced its new Screen Time function, which will be native to all devices running iOS 12.

“In iOS 12, we’re offering our users detailed information and tools to help them better understand and control the time they spend with apps and websites, how often they pick up their iPhone or iPad during the day and how they receive notifications,” said Craig Federighi, Apple’s senior vice president of software engineering. “With Screen Time, these new tools are empowering users who want help managing their device time, and balancing the many things that are important to them.”

It’s been a tumultuous year for Facebook, to say the least.

In March, news broke of a scandal involving Facebook’s past interactions with Cambridge Analytica, a data firm that had ‘inappropriately’ collected the personal data of at least 87 million Facebook users. The story sparked public outcry and heated—and sometimes absurd—congressional hearings. It also sent shares of Facebook plunging.

However, Facebook’s biggest market hit came in late July after an earnings report revealed stagnant user growth and revenue gains that fell short of analysts’ predictions. The company lost $120 billion in market value in less than 24 hours, its biggest stock drop ever.

By implementing these new wellness features, Facebook could be taking its first steps in the attempt to get out in front of a brewing existential threat: the fact that what makes Facebook money and what’s healthy for users are, in many ways, fundamentally opposed.

It’s a problem the company has known about for a while. As early Facebook investor Sean Parker said, Facebook was designed to be addictive from the start.

“The inventors, creators—it's me, it's Mark [Zuckerberg], it's Kevin Systrom on Instagram, it's all of these people—understood this consciously,” Parker said at an Axios event. “And we did it anyway.”

Whether Facebook’s tools will be effective—or whether users will have any interest in adopting ‘digital wellness’ techniques into their daily lives—remains to be seen.