Despite being rocked by the Cambridge Analytica scandal early last year, Facebook’s earnings per share increased 40 percent compared to 2017. When CEO Mark Zuckerberg was dragged before Congress to testify on his company’s handing of user information, he dodged fundamental questions as doddery lawmakers struggled to grasp basic concepts. And though the national conversation has shifted to Facebook’s proliferation of toxicity and election-crippling falsehoods, the social networking service’s apps still enjoy about 2 billion active users a day.

Has Facebook become too big to fail? Perhaps, and many are calling for the government to break up the company. They argue it is a monopoly claiming unassailable power our over data, our speech, and our lives. Leading the call is one of Facebook’s founders, Chris Hughes.

In an op-ed piece for the New York Times, Hughes lays out his argument for why the government should break up Facebook under antitrust laws. The argument is windy and diffused, but it can be abbreviated to four main pillars:

First, Facebook dominates the social network market. The company is worth half a trillion, and Hughes estimates it earns more than 80 percent of the world’s social networking revenue. It buys up competitors that get too big or popular. Those it can’t buy, it copies. It then uses its superior resources and user base to create high barriers for competitors.

Second, the company’s lock on the market ensures users have no means of protest. They can’t move to another platform. “According to the Pew Research Center, a quarter deleted their accounts from their phones [after the Cambridge Analytica scandal], but many did so only temporarily,” writes Hughes. “I heard more than one friend say, ‘I’m getting off Facebook altogether — thank God for Instagram,’ not realizing that Instagram was a Facebook subsidiary.”

Hughes’ third pillar is that Facebook isn’t free. Many would claim that antitrust laws don’t apply to Facebook, because it doesn’t charge a subscription fee. It earns revenue through advertisements, meaning it can’t engage in monopolistic activities like price fixing. But Hughes counters that we pay for Facebook with our attention and data. Neither is cheap in our data-driven era, and we don’t know how it is being spent by Facebook.

‘The vibrant marketplace that once drove Facebook and other social media companies to complete to come up with better products has virtually disappeared,’ writes Hughes. ‘This means there’s less chance of start-ups developing healthier, less exploitative social media platforms. It also means less accountability on issues like privacy.’

Hughes’ final pillar is Zuckerberg’s unilateral control, which gives him the ability to monitor, organize, and censor speech at an unprecedented level. Facebook’s algorithm decides what speech goes through, what speech is deleted, and what speech users see and how often. What bothers Hughes is not that his friend has abused this power, but that the power exists without oversight from government or independent authority. (Zuckerberg, it should be noted, agrees on this point.)

Nor is Hughes alone. Others have been making similar arguments. To name two: Jonathan Taplin, director emeritus of the Anneberg Innovation Lab at the University of Southern California, and Robert Reich, former U.S. secretary of labor, have both called for breaking up Facebook — and thrown Apple, Amazon, and Google to their lists for good measure.

At the CLSA Investors’ Forum, Taplin laid out his concern that these titans are not truly neutral platforms. As they diversify and enter new markets, they will use their clout to direct users to favor their products and services, stifling competition and pushing out third parties. To support his conclusion, he points to the European Union’s decision to fine Google for antitrust abuses.

After Hughes’s op-ed, Nick Clegg, Facebook’s vice president for global affairs and communications, wrote to the Times with his own thoughts. To the surprise of no one, he contended that his company should remain intact because antitrust laws do not apply to Facebook’s current situation.

His first disagreement is the old saw that success should not be punished. Facebook’s global reach is the result of its savvy business practices, designing a high-quality product for a low (“no”) price, and its ability to innovate and maintain relevancy. Antitrust laws, he says, were not designed to dismantle success simply because others disagree with company management.

His second argument directly targets Hughes’s understanding of the competitive landscape. Clegg pictures Facebook as a large company, yes, but one built of smaller services. Each of these services faces fierce competition in its unique market. Facebook’s video-sharing service must compete with YouTube, while photo-sharing vies with Snapchat and Pinterest and so on. In terms of revenue from digital advertising, Facebook’s share is about 20 percent of the U.S. market, hardly a monopolistic slice.

Nor does Clegg stand alone. Others without a vested interest in Facebook agree that the above criticisms have misread the market.

Matt Rosoff, editorial director of technology at CNBC, argues Facebook isn’t in the business of “social networking,” which he suggests is an ill-defined marketing term. Rather, Facebook is a communications service that allows people to connect by way of the internet.

If you accept the view that Facebook is in the communications game, then its market share, though impressive, hardly constitutes a monopoly. In online advertising, Facebook trails behind Alphabet, parent company of Google and YouTube, which controls about 37 percent of U.S. digital advertising market. 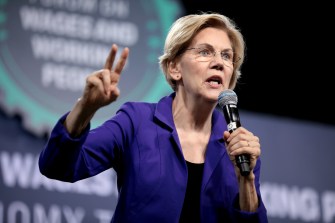 Should Facebook be broken up? Your answer to that question will depend on which market you see the company competing in and whether antitrust laws should extend beyond money to encompasses resources such as data and attention.

While above experts may not agree on these facts, each believes the government should take a stronger approach to regulating Facebook and other Silicon Valley players. Yes, even Zuckerberg and Clegg.

“In recent months we’ve also been working with American regulators on how we might introduce significant improvements to our approach on privacy. We are in the unusual position of asking for more regulation, not less,” writes Clegg for the Times.

Meanwhile, Hughes writes about the importance of governmental oversight:

“We don’t expect calcified rules or voluntary commissions to work to regulate drug companies, health care companies, car manufacturers or credit card providers. Agencies oversee these industries to ensure that the private market works for the public good. In these cases, we all understand that government isn’t an external force meddling in an organic market; it’s what makes a dynamic and fair market possible in the first place. This should be just as true for social networking as it is for air travel or pharmaceuticals.”

With such a wide consensus, you’d think improved regulation would be likely. But as Reich points out, Congress has little incentive to regulate Facebook (much less break it up). Republican lawmakers view antitrust laws as profaning the free market. Meanwhile, big technology overwhelming donates to progressive candidates and campaigns. The Democratic platform “A Better Deal” proposes to crack down on corporate monopolies — such as those found in the airlines, telecom, and beer industries — but makes no mention of big tech like Apple, Amazon, or Facebook.

That climate may be changing though. Democratic candidates Bernie Sanders and Elizabeth Warren have come out in support of breaking up Facebook. While candidate Kamala Harris has not gone that far, she is in favor of increased regulation: “I think that Facebook has experienced massive growth, and has prioritized its growth over the best interests of its consumers — especially on the issue of privacy. There is no question in my mind that there needs to be serious regulation, and that has not been happening. There needs to be more oversight; that has not been happening.”

Social media distorts the reality of the public sphere.
Up Next
Think Again Podcasts

Adam Gopnik on the rhinoceros of liberalism vs. the unicorns of everything else

Torn between absolutism on the left and the right, classical liberalism—with its core values of compassion and incremental progress whereby the once-radical becomes the mainstream—is in need of a good defense. And Adam Gopnik is its lawyer.