American kids are ditching Facebook for other social media platforms, and 2018 might bring the largest online migration yet.

In a report on the future of Facebook’s U.S. audience, the research firm eMarketer estimates that the platform will lose 2 million users ages 24 and younger this year. The report also predicts that usage among users ages 12 to 24 will decrease by about 5.7 percent, and that usage among kids younger than age 12 will decline by 9.3 percent. What’s more, some of the youngest kids in the U.S. will bypass signing up for Facebook altogether, a group dubbed the “Facebook nevers.”

The report marks the first time eMarketer has predicted a drop among young users of the social media platform. And even though Facebook is expected to add new users in 2018, the firm says it’ll do so at the relatively slow rate of 1 percent, and those new users will be of an older demographic.

Facebook’s own data tell a similar story. According to the company’s fourth-quarter earnings report for 2017, the amount of time users spent on Facebook dropped by 50 million hours daily. And, for the first time in the company’s history, the number of daily active users in the U.S. dropped, by about 700,000. 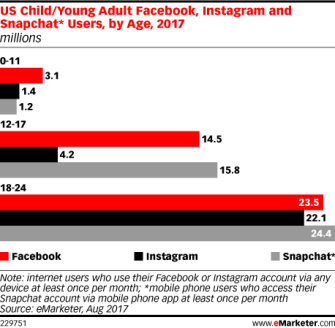 Meanwhile, Snapchat and Instagram are on the rise. eMarketer predicts that Snapchat will add 1.9 million users ages 24 and younger in 2018. Instagram, which is owned by Facebook, will add an estimated 1.6 million users of the same age group this year—which would still make it the largest social media platform besides Facebook.

So, why are kids leaving?

In a blog post from August 2017, eMarketer analyst Oscar Orozco suggested the main reason has to do with how the younger generation consumes media.

“Both [Instagram and Snapchat] have found success with this demographic since they are more aligned with how they communicate—that is, using visual content.”

“Teens want that instant gratification. That’s why Snapchat and Instagram work well for them. Their minds move quickly… Facebook feels like an investment of their time, and they don’t want to invest their time in it.”

Facebook also isn’t ideal for smartphones. The lean, image-based interfaces of Instagram and Snapchat are undoubtedly better suited for palm and thumb.

What’s more, kids have probably learned to see the permanent nature of Facebook as a liability. How many times do you think adults have told them some version of: “don’t post anything inappropriate on Facebook because it’ll be there forever.” It’s easy to see how Snapchat’s relative ephemerality is alluring on that front.

To be sure, Facebook is still the world’s leading social media platform, and it saw explosive growth in 2017. The company hit 2 billion users worldwide—a full 500 million above YouTube—and its stock soared about 50 percent. But there were controversies, too: allegations of Russians meddling in the election, fake news, metrics errors, and a growing body of research showing how using social media can harm mental health.

In December 2017, Mark Zuckerberg announced Facebook would be redesigning its News Feed algorithm to bring users less news and promotional content, and more posts from friends and family.

“We feel a responsibility to make sure our services aren’t just fun to use, but also good for people’s well-being,” Zuckerberg wrote in a post on his personal Facebook page, adding that he expected “the time people spend on Facebook and some measures of engagement will go down.”

He was right.But beyond that anticipated blow seems to lie an existential threat that’s been looming over Facebook for years: that kids want a social media platform used by and designed for their own generation — not one to share with their parents.

Tags
FacebookinstagramsnapchatSocial mediasocial media useteenagersyoung americansyoung internet userszuckerberg
In this article
FacebookinstagramsnapchatSocial mediasocial media useteenagersyoung americansyoung internet userszuckerberg
Related
Neuropsych
We need boredom to live better lives. But social media is destroying it
When boredom creeps in, many of us turn to social media. But that may be preventing us from reaching a transformative level of boredom.
High Culture
Could letting social media users rank accuracy help stop misinformation?
People naturally judge fact from fiction in offline social settings, so why is it so hard online?
Health
What is brown noise? Can this latest TikTok trend really help you sleep?
Brown noise, the better-known white noise, and even pink noise are all sonic hues.
Thinking
A “psychological vaccine”: Why prebunking is the best way to fight misinformation
By exposing people to small doses of misinformation and encouraging them to develop resistance strategies, “prebunking” can fight fake news.
The Present
Negative, emotionally manipulative news headlines have skyrocketed since 2000
The media is deliberately pushing your buttons.
Up Next
Politics & Current Affairs
On median, one U.S Senator is as rich as 40 American households
“The most pro-business thing you can to is to help middle-class people thrive.” Nick Hanauer, venture capitalist and entrepreneur.