The New York Times obtained hundreds of pages of documents and interviewed about 50 former employees of Facebook and its partners for its report. It reveals how the social media giant opened up its massive cache of user data to major tech companies in order to boost profits and gain users.

Facebook never quite sold its users’ data, but it did grant “other companies access to parts of the social network in ways that advanced its own interests,” the report states. One example is Facebook’s partnership with Spotify, a music-streaming platform on which new users can easily create an account using their Facebook sign-in information.

Partnerships like this were part of a long-term strategy to “weave Facebook’s services into other sites and platforms, believing it would stave off obsolescence and insulate Facebook from competition,” according to the report.

In many cases, Facebook’s partner companies had access to users’ friends lists, contact information and, in the case of Netflix and Spotify, private messages. These third-party companies often didn’t obtain permission from Facebook users to access their information. That’s possibly because Facebook, in a legal sense, considered its partners to be extensions of itself. Therefore, the companies weren’t in violation of a 2011 consent agreement with the Federal Trade Commission that barred Facebook from sharing users’ data without permission. 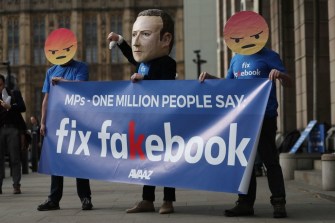 Protestors from the pressure group Avaaz demonstrate outside Portcullis house where Facebook’s Chief Technology Officer Mike Schroepfer is to be questioned by members of parliament in London on April 26, 2018.

“This is just giving third parties permission to harvest data without you being informed of it or giving consent to it,” David Vladeck, who formerly ran the F.T.C.’s consumer protection bureau, toldTheTimes. “I don’t understand how this unconsented-to data harvesting can at all be justified under the consent decree.”

Spokespeople for Facebook told TheTimes that the partnerships didn’t violate users’ privacy or the F.T.C. agreement, and that the company has found no evidence of wrongdoing by its partners. Some partners, including Amazon and Microsoft, said they used data appropriately, but declined to elaborate on what that means.

Many companies said they were unaware of the extent of the powers Facebook had granted them through the partnerships. It remains unclear how closely Facebook monitored the ways in which its partners used user data.

Shares of Facebook stock dropped following the report, shedding as much as $22 billion in market value. The news comes in the wake of multiple scandals that have bombarded the company this year, most recently the seizure of hundreds of internal documents by British lawmakers.

One of the best ways to protect your data, besides not using Facebook at all, is to make sure you never sign into a third-party platform by using your Facebook information. You can see which apps or websites you’re currently logged into using Facebook by checking out your current settings: 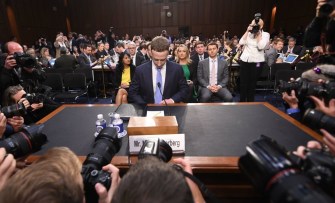 Facebook CEO Mark Zuckerberg arrives to testify before a joint hearing of the US Senate Commerce, Science and Transportation Committee and Senate Judiciary Committee on Capitol Hill, April 10, 2018 in Washington, DC.

Is personal data the “oil of the 21st century”?

That’s the claim TheTimes makes in its new report. The data seems to back it up: By the end of 2018, American companies are projected to spend around $20 billion on user data. There’s no shortage of it. Each day, about 2.5 quintillion bytes of data gets created, and much of that is personal data with which companies can use to created targeted ads, refine their services, study consumer habits, and, frankly, god knows what else.

By exposing people to small doses of misinformation and encouraging them to develop resistance strategies, “prebunking” can fight fake news.

The media is deliberately pushing your buttons.
The Future

From 260-year-old ciphers to the most recent Zodiac Killer solution, these unbreakable codes just needed time.
Up Next
Strange Maps