Where does Valentine's Day come from? Let us introduce you to the festival of Lupercalia, a festival when naked young men and women ran around whipping one another with animal hides. 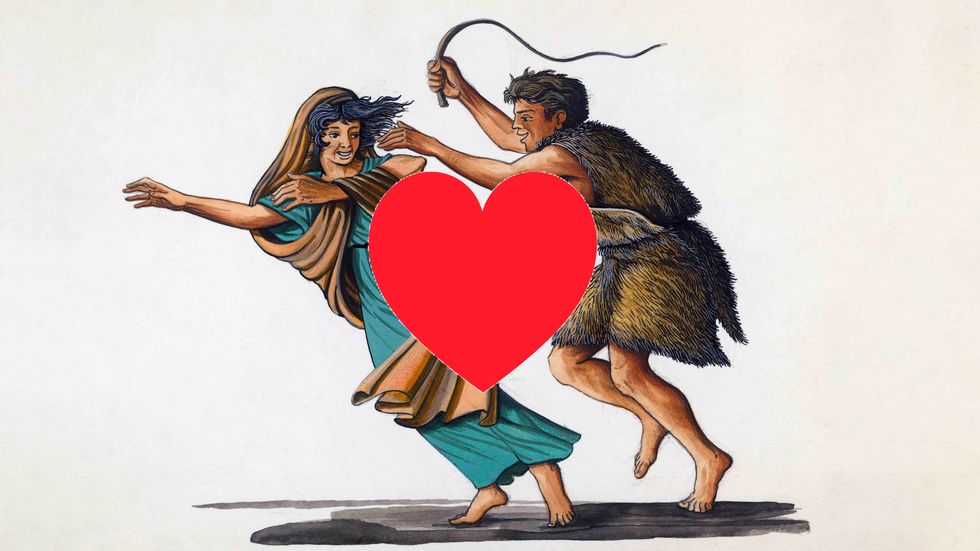 Valentine’s Day is a weird holiday when you think about it. On a usually cold day—February 14—we eat chocolate, give greeting cards, celebrate romance, and find the need to make a big deal out of it in schools. While the modern holiday is, often correctly, viewed as a “Hallmark Holiday” the origins of the festival go back more than two thousand years to a Pagan ritual with strange customs and festivities that would make a modern romantic blush.

The Roman festival of Lupercalia is that Pagan ritual, and a very good candidate to be the original Valentine’s Day celebration. The origins of the holiday are a touch obscure, though it seems likely that many elements were pre-Roman. Lupercalia does seem to have inherited some of its activities from the earlier festival of Februa, which was dedicated to springtime purification. The name of February is derived from this festival.

What did people do during the Roman festival of Lupercalia?

A cult of priests known as the Luperci offered sacrifices of goats and dogs to the goddess Juno. This ceremony was carried out in the cave where the legendary founders of the city, Romulus and Remus, were saved by the she-wolf who nursed them. After the sacrifice, a feast was held. The hides of the sacrificed animals were then cut into strips by the priests.

Fertility rites were performed, in which naked women were struck with the hides of the sacrificed animals as the priests ran around Palatine hill counter-clockwise. This was intended to make the women more fertile and aid in childbirth. After this, a matchmaking lottery was held. All of this took place with the help of a lot of drinking. Clothing was optional for members of the public, and people rarely wore it as a result. Plutarch, the great Roman historian, described it as such:

..many of the noble youths and of the magistrates run up and down through the city naked, for sport and laughter striking those they meet with shaggy thongs. And many women of rank also purposely get in their way, and like children at school present their hands to be struck, believing that the pregnant will thus be helped in delivery, and the barren to pregnancy.

Others agree with Plutarch, telling us that the city was filled with naked young men and women who ran around whipping one another with animal hides.

Some of the activities that we know about have meanings that are lost to us. For example, after the sacrifice of the goats and dogs, two Luperci would have their foreheads anointed in blood from the sacrificial knife. They would then have the blood wiped off with wool that had been soaked in milk. They were then expected to laugh or smile that this turn of events.

The exact meaning of their expressions is lost to time.

The Luperci seeking out targets to whip as depicted by Adam Elsheimer. (Getty Images)

Lupercalia wasn’t a one-off thing either.

After the Romans added the month of February to their calendar, Lupercalia was placed on the fifteenth day of that month. The festival was popular. This was known and used by Julius Caesar when he publicly denied a crown during the festival, which added to his cult of personality. Lupercalia was celebrated continuously until around 500 C.E when regulations designed to stamp out Pagan rituals helped bring it to an end.

A member of the public armed with a whip to bring forth fertility. Was this the start of Valentine's Day? (Getty Images)

Some researchers argue that Lupercalia was mostly done away with by Pope Gelasius I, who may have placed a feast of purification on that day. Others say that the festival was allowed to continue, with Christian overtones and clothing added. In any case, Valentine’s Day, named after a saint killed by the Romans, retains the approximate date and many of the romantic themes of the Roman Lupercalia.

While the evidence for the exact fate of the holiday remains fuzzy, it is true that many Pagan festivals were co-opted by the Christian church rather than abolished. This makes it not only possible but likely that the holidays are related. Some historians, however, still reject the notion that Valentine’s Day was purposefully created to push out Lupercalia.

How did we go from Lupercalia to St. Valentine's Day?

Since the Middle Ages, Valentine’s Day has gotten progressively sweeter. This phenomenon was largely promoted by writers like Chaucer and Shakespeare who romanticized the courtly love aspects of the holiday. The first Valentine’s card was sent in 1415 by a French nobleman. Americans sent handwritten cards to one another as the holiday gained traction during the revolution. In the 1900’s the cards started to be mass produced.

This collection of Valentine's gifts in Cambodia suggests that the mass production goes much further than ever before. (Getty Images)

It all seems a far cry from the drunken revelry in Rome. Today, we would hardly suppose that there was much of a relationship at all between the drunken Pagan fertility rites of Rome and Valentine’s Day if we were to watch both take place.

While Valentine’s Day has become a fun, commercialized, slightly silly holiday dedicated to candy, cheesy TV specials, cards, and overpriced romantic dinners, the origins may be wilder than anything we would imagine. It is inevitable that holidays evolve, and customs change, but how severely they may do so is variable. The story of Lupercalia and Valentine's Day may show how a holiday can retain the same themes over 2,000 years and do a complete 180-degree turn on how those themes are expressed and celebrated.

So go out and have a nice Valentine’s Day, and maybe be thankful that you don’t have to dodge naked people with whips on your way to the store.