Valentine’s Day is named after St. Valentine, who has become known as the patron saint of lovers. He was a rather mercurial figure about whom little is known.

Who was St. Valentine and how did he come to bless lovers’ hearts in the middle of February? One can imagine some combination of a cherubic Cupid and a saintly old man with a nice smile fulfilling that role. The truth is, of course, more complicated. First of all, there was more than one Saint Valentine. There were three.

That would be the life of Saint Valentine of Rome who, far from being lucky in love on February 14th, was beheaded. Hardly a romantic ending. However, it’s likely that the stories of several Valentines merged into one as ‘Valentius’ (meaning ‘worthy,’ ‘strong’ and ‘powerful’ in Latin) was a popular moniker at the time. Several martyrs ended up with that name.

The church itself has some doubts about what specifically happened in Saint Valentine’s life. In 496 AD, Pope Gelasius I described St. Valentine as a martyr like those ‘whose names are justly reverenced among men, but whose acts are known only to God.’ Gelasius I understood how little was known about the saint when establishing February 14th as the day to celebrate Valentine’s life. 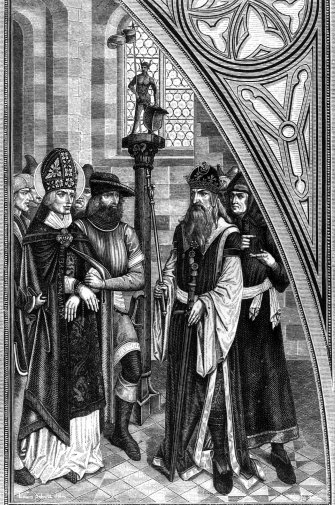 St. Valentine of Rome was supposedly a temple priest who was executed near Rome by the anti-Christian Emperor Claudius II. The crime? Helping Roman soldiers to marry when they were forbidden to by the Christian faith at the time.

According to one historical account, the Roman Emperor went to such measures against Valentine because the saint tried to convert him to Christianity. This enraged Claudius, who tried to get Valentine to renounce his faith. The martyr refused, so the emperor ordered him beaten with clubs and stones, and subsequently executed him.

One (or two) St. Valentines are thought to be buried in a cemetery in the north of Rome. Little is known about the third Valentine in North Africa other than his supposed martyrdom. 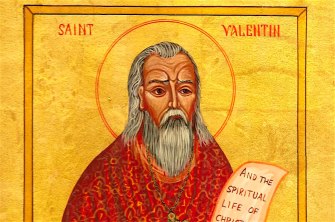 How did we go from Christian martyrs to Hallmark cards? When Pope Gelasius I dedicated February 14th to the saint and martyr Valentine, he chose that date to replace the traditional Roman feast Lupercalia, a pagan festival popular at the time. Lupercalia was a fertility festival in honor of the god Faunus (Lupercus), the protector of sheep and goats from wolf attacks, as well as Lupa – the she-wolf who nurtured the orphans Romulus and Remus, associated with the founding of Rome by legend.

The pagan fertility celebration was marked by all manner of rituals like foot racing among naked men, covered in skins of sacrificed goats. Apparently, they would whip women staged along the race course as they ran. Another ritual required a child to pair couples at random who would have to live together and be intimate for an entire next year in order to fulfill the fertility rite. The church was eager to replace such practices with its own focus and St. Valentine became the saint of lovers. 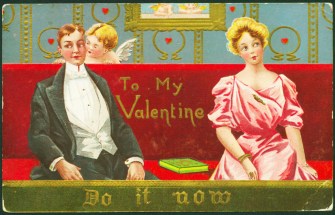 As St. Valentine’s Day was spread to England and France by Benedictine monks, the practice started to acquire more modern characteristics in the Middle Ages. The poet Geoffrey Chaucer, in particular, is credited with spreading the notion of courtly romance through his writings, some dedicated to St. Valentine.

Writing ‘valentines’ to your beloved is linked to that same time period, with the oldest such note dating to the 15th century. As reported by Italian Heritage, it was written by Charles d’ Orléans, who was at that point held in the Tower of London, following his defeat at the Battle of Agincourt (1415). Charles wrote to his wife the words that translated to: “I am already sick of love, My very gentle Valentine”.

Shakespeare also took part in popularizing the link between Valentine’s Day and love, writing about St. Valentine’s day in a romantic context as part of his “Midsummer Night’s Dream”.

Exchanging “valentines” or love notes (often heart-shaped) on Valentine’s Day further spread throughout Anglo-Saxon countries in the 19th century. Large-scale marketing and production of greetings cards started with the Industrial Revolution as early as mid-19th century. This process of commercialization of the holiday continued, especially in the United States, during the 20th century, adding additional traditions like more elaborate love notes, with added gifts like chocolates, flowers and jewelry.

So while the original St. Valentine was likely tortured and beheaded on February 14th, his sacrifice for the Christian faith has become the Valentine’s Day we have today.

Far from acting as the conduits of a benevolent deity, these religious leaders threw the teachings of their own church out of the window.
Up Next
Sex & Relationships

Is this Valentine’s Day thanks to the 36 love questions?

Taking stock of the impact of the 36 love questions on Valentine’s Day.