5 Reasons We Shouldn’t Be Afraid of Aliens

Astrobiologist Lewis Dartnell explains why we shouldn’t be afraid of alien visitors. 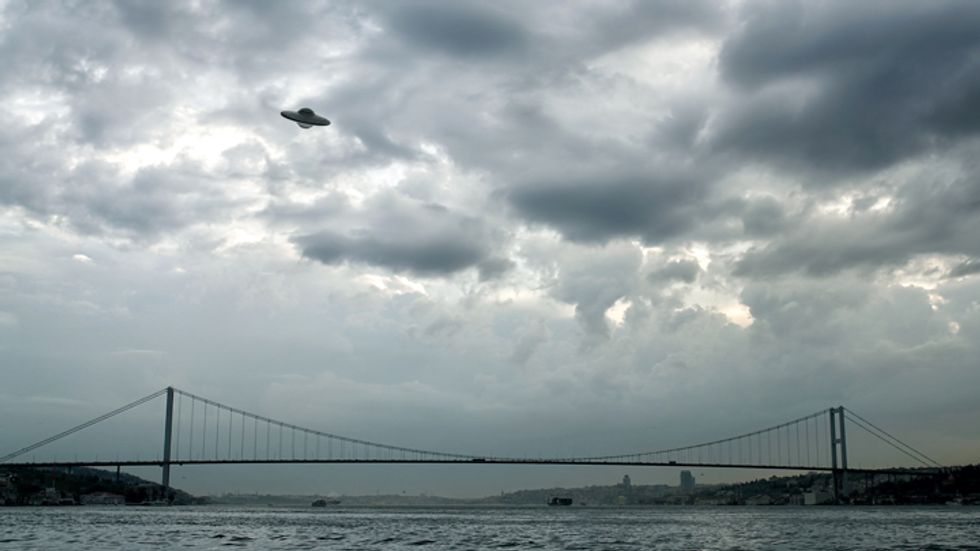 As we perhaps draw thrillingly/terrifyingly closer to discovering life elsewhere in the universe, the chorus of people warning us to be careful what we wish for is growing louder. Most famously, renowned physicist Stephen Hawking has argued for hitting the brakes, reiterating as recently as 2016 his concern about seeking alien contact in his comments about possibly life on Gliese 832c: "One day, we might receive a signal from a planet like this. But we should be wary of answering back. Meeting an advanced civilization could be like Native Americans encountering Columbus. That didn't turn out so well." For example, European germs were deadly for the natives and some fear that could happen to us.

Astrobiologist Lewis Dartnell, however, disagrees with all of this. From his perspective, things are considerably less scary than many think. In an article recently published on Literary Hub, he offers a host of comfortingly solid arguments for why we should stop worrying.

1. Why Aliens Wouldn’t Want to Enslave Us or Breed with Us

Sure, humans have repeatedly enslaved other humans throughout our history, but we’re not that advanced. Our collective sense of guilt may be making us fear that someone else will do to us what we’ve done to others. Dartnell says we’re looking at this wrong.

There’s an increasing concern that we’ll soon find ourselves competing for jobs with robots. After all, they may offer a more efficient form of labor than us humans. Dartnell points out that any civilization advanced enough to traverse space and arrive here would have no need for slaves. He writes, “Constructing robots, or other forms of automation or mechanization, would be a far more effective solution for labor—people are feeble in comparison, harder to fix, and need to be fed.”

As far as wanting us for breeding purposes, Dartnell’s points out how perfectly in sync two organisms’ chemistry has to be to allow mating — in fact, such mismatches are what separates one terrestrial species from another. For reproduction to be possible, here’s a short list of some of the things aliens would have to share with us. The same:

• polymer, or RNA, we use for storing genetic information

• coding system that that translates the letters into proteins

Given how rare a workable match is even here on earth, Dartnell concludes it’s “overwhelmingly improbable that an alien life form from a completely different evolutionary lineage would be compatible.”

2. Why Aliens Wouldn’t Want to Eat Us

As food, it’s likely we wouldn’t agree with them. In order for an alien to derive any nutrition from us, they’d have to be biochemically similar. They’d have to have enzymes that allow them to successfully break down and make use of the polymers of amino acids, polymers of bases and sugars, and membranes of phospholipids from which we’re made.

Dartnell points that while there’s a chance they’d be made of the same stuff as us — amino acids, sugars and fatty molecules have all been found in meteorites , suggesting they’re common across the universe — there’s an interesting additional wrinkle: Enantiomers. Simple organic molecules can occur in mirror images of each other. As Dartnell says, it’s like how your two hands are the same, but can’t be placed atop each other in alignment. All life on our planet has “left-handed” amino acids and “right-handed” sugars, and any creatures looking to us for sustenance would need to have the same, even if they do share our basic microbiology.

3. Why Aliens Wouldn’t Come Here to Steal Our Water

Simply put, there’s plenty of water everywhere, water that would be easier to acquire than the stuff we have. A thirsty alien visiting our solar system would probably head straight for Jupiter’s moon Europa, which holds more liquid water beneath its frozen surface than we have here. There also appears to be lots of water on other icy moons and even in comets and asteroids, the likely sources of our own H2O. It would be easier to suck it off one of those smaller bodies than from a planet like ours with so much gravity trying to hold our water in place.

4. Why Aliens Wouldn’t Come Here for Some Other Raw Material

Again, asteroids seem like a more logical place to get any of the building materials we have here such as iron, nickel, platinum, tungsten and gold. The lack of gravity would again make them easier to extract from a smaller body. In fact, there are companies on earth planning asteroid mining operations.

What Dartnell suggests may make us a bit more special in this regard is plate tectonics, which hasn’t been seen many other places so far, and could theoretically produce something we’re unaware of that an alien might want. Maybe.

5. Why Aliens Wouldn’t Want to Colonize and Live Here

As an astrobiologist, Dartnell admits that earth hosts a variety of conditions that make it especially suitable for supporting complex life, and that it could therefore be attractive to an extraterrestrial species looking for a new home.

However, he points out that any civilization capable of traversing the mind-boggling expanses of space is probably more than capable of artificially managing, or “bioengineering,” the environment of any planet to make it habitable. If this is so, why would aliens bother with having to eradicate the billions of organisms here that are unlikely to line up with an alien’s own unique biochemistry? It would be quicker and easier to simply design and build a compatible biosphere somewhere free of bothersome inhabitants.

So Why Would Aliens Come Here at All?

From Close Encounters of the Third Kind

Dartnell suggests that if aliens do appear, it may simply be that they want to meet us. “I suspect that if aliens did come to Earth, it would be as researchers: biologists, anthropologists, linguists, keen to understand the peculiar workings of life on Earth, to meet humanity and learn of our art, music, culture, languages, philosophies and religions” he writes.

And Where Are They, Anyway?

Dartnell asserts that since we’ve been sending signals out into the void for nearly a century — and recently, intentionally doing so — yet no one has responded, one of two things are most likely:

1. Either no one’s out there, and we’re alone.
2. There’s so much intelligent life in the universe that we’re not that special.

Either possibility packs an emotional wallop.

For many of us, the thought of aliens visitation began with movies like Close Encounters of the Third Kind that had us scanning the night skies with a hopeful sense of expectation. Lately, however, some have been shifting our gazes downward with a fearful sort of, “nope, nothing here to look at, keep flying by” attitude. Darnell’s argument makes so much sense, though, that it feels safe once again to look back upward in excitement at that sky full of promising stars.