We’ve discussed before what Einstein thought about god. As he was a brilliant man who thought deeply about many subjects, it can be of great use to learn his perspective on things. While he was a scientist first, his ideas on subjects outside his area of study can still be valuable. Especially if, as in this case, he recognizes his limitations and focuses on general ideas and avoids technical issues.

In 1949, Einstein wrote an article for the magazine Monthly Review explaining his thoughts on socialism. In it, he explains his political positions and why he feels the need to weigh in on a subject that is outside his area of expertise.

In the first section of the essay, he acknowledges that he is a man of science and not an expert on economics. He still feels that he is able to offer a few comments on the subject as “socialism is directed towards a social-ethical end. Science, however, cannot create ends and, even less, instill them in human beings; science, at most, can supply the means by which to attain certain ends.” As he doesn’t wish to speak scientifically or be overly technical, he argues that a non-expert can make a few points on the subject and begins to do so.

Einstein had three bones to pick with capitalism. The first is that “Man is, at one and the same time, a solitary being and a social being.” He explains his stance that a person is at once an individual and at the same time rather dependent on society for a great many things. However, despite the necessity of a high functioning society for our wellbeing, he sees capitalism as encouraging a mad drive for personal success at the expense of society and leading us to educate our children in a way that reinforces this behavior.

This damages the individual, he argues. It drives us to educate ourselves only to find a job and not to fully develop beyond that. Furthermore, it can leave the individual in a constant state of fear over the risk of losing their livelihood, which leads to Einstein’s second objection.

“The economic anarchy of capitalist society”

His second objection is one of waste and inefficiency. While capitalism strives for efficiency, it cannot always make good use of the total body of labor society has to offer. Einstein sees this as a poor way to organize an economy. He posits that:

“There is no provision that all those able and willing to work will always be in a position to find employment; an “army of unemployed” almost always exists. The worker is constantly in fear of losing his job. Since unemployed and poorly paid workers do not provide a profitable market, the production of consumers’ goods is restricted, and great hardship is the consequence. Technological progress frequently results in more unemployment rather than in an easing of the burden of work for all.”

While it would be most profitable for society at large if total employment was assured, Einstein suggests that capitalism cannot do this on the grounds that it is more profitable for the owners of the means of production, who are often few in number, to not do so. 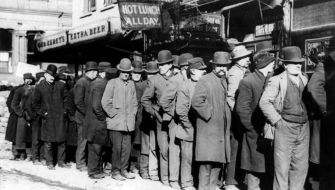 Lastly, he sees the profit motive as a cause of great suffering. Going so far as to say that, “The economic anarchy of capitalist society as it exists today is, in my opinion, the real source of the evil.” He explains further that:

“The profit motive, in conjunction with competition among capitalists, is responsible for an instability in the accumulation and utilization of capital which leads to increasingly severe depressions. Unlimited competition leads to a huge waste of labor, and to that crippling of the social consciousness of individuals which I mentioned before.”

What does Einstein propose as a solution?

His support of socialism comes from the belief that it will solve the problems he finds in capitalism on the grounds that a socialist economy would not be based on the profit motive and would be more oriented towards filling social needs rather than a capitalist economy.

“I am convinced there is only one way to eliminate these grave evils, namely through the establishment of a socialist economy, accompanied by an educational system which would be oriented toward social goals. In such an economy, the means of production are owned by society itself and are utilized in a planned fashion. A planned economy, which adjusts production to the needs of the community, would distribute the work to be done among all those able to work and would guarantee a livelihood to every man, woman, and child.”

He is careful to note that central planning alone will not be enough. He warns of the risks of a Soviet-style dictatorship and insists that any type of socialism worthy of the name must be democratic and have protections for the personal freedoms we enjoy. The socialism he had in mind was one more akin to that of the western European nations than that of the communist countries.

After his experience fleeing the Nazis, it is perhaps self-evident that he understood the vital need to assure freedom. He was also opposed to McCarthyism and offered to serve as a character witness when W.E.B Du Bois was accused of being a communist spy. He also worked for civil rights in the United States, was associated with the Princeton chapter of the NAACP, and housed the singer Marian Anderson in his home when she was denied a hotel room in Princeton. 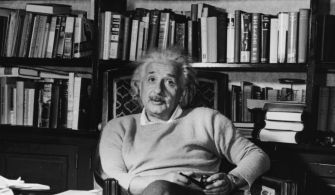 Albert Einstien at his home in 1934. (Getty Images)

So, Einstein is now a masterful economist as well as a physicist?

His objections are philosophic ones rather than economic ones. His argument that the profit motive leads to depressions and that central planning can solve the boom and bust cycle is an argument which would have made much more sense in 1949 when the problem of market failures was more evident than the problem of planning failures. In any case, his arguments do make valid points which must be considered in any debate.

While Einstein was not an economist, he was still a genius who had insights on how the world around him could function better. His endorsement of democratic socialism is well reasoned and done without reservation. Anyone considering why a person might be motivated to support socialism must consider Einstein’s arguments as to why a rich, intelligent, and highly successful person would endorse the ideology.

If you would like to read the essay for yourself, it can be found here.

Related
Neuropsych
Daily caffeine intake temporarily alters your brain structure
Compared to people who took a placebo, the brains of those who took caffeine pills had a temporarily smaller gray matter volume.
Thinking
Why you should laugh at yourself, according to Seneca and Nietzsche
“It is more human to laugh at life than to lament it.”
Hard Science
The violence of the Tonga eruption is a wake-up call to watch other submarine volcanoes
Out of sight, but not out of mind.
The Present
How circular economics can make us happier and less stressed
Entrenched business wisdom says that community-led economic systems are pure fantasy. Douglas Rushkoff disagrees.
The Learning Curve
The art of asking the right questions
The right questions are those sparked from the joy of discovery.
Up Next
Starts With A Bang
Sorry, Doomsday Forecasters, Earth’s Mass Extinctions Occur At Random
Asteroid strikes and supervolcano eruptions may yet have patterns to them, but the extinctions we’ve experienced appear to have occurred at random.Throughout the history of life on Earth, there have been […]