Need Another Use for a Liberal Arts Education? How about Learning to Be a Citizen?

While we often criticize the humanities for not providing an education that leads directly to employment, one philosopher argues they have an even more important role to play in our societies. 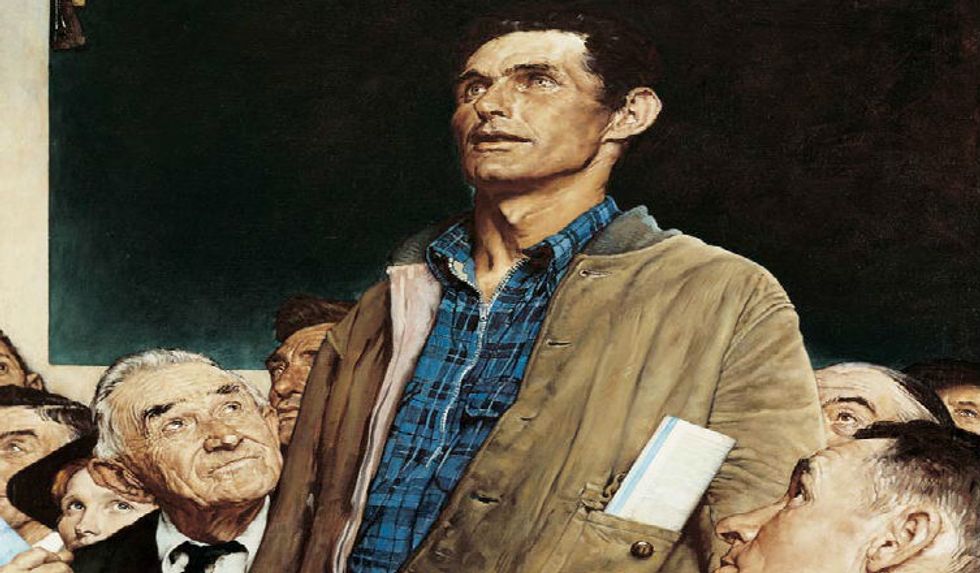 Yet another history major who can't find a job? (Norman Rockwell, The Freedom of Speech)

We’ve discussed before that Socrates, one of the greatest things to come out of Athens, hated Athenian democracy. While he had many reasons to do so, one of the primary ones was that the typical Athenian had no idea what they were discussing, and were prone to using emotion over reason when making important political decisions. They lacked both the skills for critical thinking and viewing the world outside their own perspective to be proper democratic citizens.

But, as philosopher Martha Nussbaum argues, we can avoid those problems by placing a high value on an education in the humanities. A high value which today is often difficult to find.

In her book Not for Profit, Why Democracy Needs the Humanities, Nussbaum lays out the case that a job oriented education, one focused on preparing students for work, is far from enough to assure that the students will also be able to function as democratic citizens in a pluralistic, modern, and globalized, society.

While she doesn’t deny the need for technical education; she argues that a purely job oriented education, or even one which is highly focused on a narrow field of study, does not promote the development of critical thinking skills, the ability to consider differing viewpoints, an understanding of people vastly different from themselves, or strong methods for finding truth for themselves that people need as citizens.

These skills, she argues, are best found in the arts and humanities as promoted by a liberal arts education at all levels. While the United States is doing well at the university level of teaching these things, she contests that we are often unwilling or unable to do so at the grade school or high school level. If we do not assure students have access to the arts and humanities, she posits, we are likely to fall victim to demagoguery and lose the benefits of a modern democratic society.

Well, what’s wrong with our current method of teaching the humanities? Why write a whole book on this?

A major issue in modern American education she discusses is the increasing use of standardized fill in the bubble tests, and the tendency of teachers to “teach to the test”. It isn’t impossible to teach the humanities in a way that can be easily tested, the treatment of philosophy as a test subject for the A and O level exams in the United Kingdom has shown that much, but Nussbaum shows us how a multiple-choice test is unlikely to encourage any skills other than the regurgitation of information. They aren’t even that good at what they claim to do anyway.

With the national focus increasingly given to education for employment and competitiveness those parts of education which seem unlikely to lead to employment are the most simple to justify cuts to. Nussbaum laments this, and notes that at her own university advertising geared towards new students focuses nearly exclusively on those programs seen as practical and leading to employment. She dubs the combination of funding cuts and lack of attention a “crisis of massive proportions” which is still underway.

Suppose we just got rid of the humanities. Can’t we be a free people without them?

The myriad examples of tyrants attacking the arts and humanities suggests we might be wise to hold on to them. She cites, among other events, the prohibition of teaching the Korean language in public schools and the crackdown on Confucian education in general during Korea’s occupation by Imperial Japan. All a key part of the plan to reduce the Korean people to servants of Japanese imperialism, a role which had no need for a non-technical education.

Nussbaum later argues that the most cartoonish and often horrifying mistakes made by the Athenian democracy, which caused thinkers like Socrates, Plato, and Aristotle to reject democracy, could have been easily avoided if the population had any of the skills an education in the humanities provides.

The Funeral Oration of Pericles, an example of the Athenians being led by a populist working in their interest. Often, they were only led astray.

Is she alone in these ideas? Does anybody else argue that a democracy requires these skills?

Socrates, as depicted in The Republic, favored an intensive education for the philosopher kings he saw as the ideal rulers of his utopia. While his proposed curriculum is not the liberal arts education Americans know today, it is one that promotes the search for truth with the use of reason and logic and assures that the leaders of the city state will know not only how to lead, but how to approach the problems they may face as leaders. While he didn’t wish for the majority to lead a nation, it is clear he understood that those who do lead must have certain intellectual skills. In a democracy, these leaders are the people.

Aldous Huxley, philosopher, author of Brave New World, and noted psychonaut, made a similar observation in Brave New World, Revisited. Where he noted with terror that the world was moving towards his dystopia much faster than he had predicted and proposed education for democracy as a key tool to prevent this. He later elaborated on his proposed curriculum for a free people in his utopian work Island.

We presently have a better education system than the people of Athens; who ended their formal education in adolescence and denied it to women and non-citizens. Often inspired by Socrates and his pedagogy, today’s students can find a humanistic education in the American, Scottish, and (increasingly) Korean education systems dedicated to making them fully rounded individuals and citizens.

While Nussbaum warns us to be on the lookout to attacks on and financial cutbacks to the liberal arts model of education, we have reason to be optimistic as well. She mentions many excellent programs in American schools, such as Future Problem Solvers, as examples of democratic education done correctly and in a way that assures continued support.

The study of the humanities can have many practical uses. It can even be used to find employment, no matter what the nay-sayers might tell you. More importantly, they have an intrinsic value in allowing us to fully develop as individuals. In today’s climate, they also take on the role of helping us make democracy possible. Without a proper education in the humanities, where we learn how to understand people we may never meet, how to evaluate arguments and charged rhetoric, and imagine differing scenarios from those we see every day, we may be doomed to the fate of many a failed democracy before us.

But, if we utilize the fantastic tools we have access to, rise to the challenge of giving everyone the education they need, and emphasize all vital subject matter-even if it seems impractical, Nussbaum argues that we have much reason for optimism and the chance for the continued success of democracy all over the world.

If you would like to improve your humanities background, several Ivy League schools offer free classes you can take online. A selection can be found here and here.