Until now, it’s fair to say that technology and artificial intelligence have tended to make people more passive participants in society. Too many have lost the ability to play an active role in the economy as AI has disrupted the workplace. Too many have become passive consumers of information and are living in self-imposed bubbles of belief. And too many have withdrawn into passive lives of isolation apart from any meaningful engagement in their communities or, in some cases, even their families.

When considering human work and the future of democracy, it’s impossible to avoid the rise of authoritarianism throughout the world.

How does one escape the temptations of an AI-created bubble of information and belief? The answer, obviously, is to burst the bubble—to escape by being exposed to ideas and experiences that are fundamentally different from our own.

This begins by being exposed to people who are different from us—who have different beliefs, values, cultures, and life experiences. Human work offers this chance because it is built on human attributes such as empathy, openness, and flexibility—precisely those needed for strong communities and a strong society. The results we need to assure through human work are not just higher incomes but also openness to different cultures, willingness to engage individuals with different ideologies and perspectives, increased likelihood to vote and volunteer, and recognition of the value of open markets and free, democratic systems of government. The characteristics of human work have much more than economic consequences; they are the lifeblood of free people and societies. 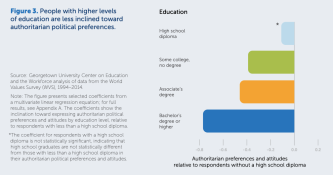 People with higher levels of education are less inclined toward authoritarian political preferences.Credit: Georgetown University Center on Education and the Workforce analysis of data from the World Values Survey (WVS), 1994–2014.

When considering human work and the future of democracy, it’s impossible to avoid the rise of authoritarianism throughout the world. According to new research from the Georgetown University Center on Education and the Workforce, the alarming increase of authoritarianism on a global scale can’t be considered in isolation.

The postwar world order was based on the expectation in the West that democracy was spreading throughout the world, country by country, and would eventually become the preferred form of government everywhere. Foreign relations were based on the broad consensus that established democracies should be vigilant and unwavering in offering military and cultural support to emerging democracies. Democracy spread throughout Latin America and even appeared likely to take root in China. The end of the Cold War seemed to confirm the inevitability of democracy’s spread, with only a few old-style authoritarian systems left in Cuba, North Korea, and other poor, isolated countries.

Today, the tide seems to be turning in the opposite direction. Authoritarianism—particularly in the form of populist nationalism—has returned to Russia and parts of Eastern Europe, Asia, and Latin America. China appears resolute in maintaining state control over political and cultural expression. And we now understand clearly that not even the United States and Western Europe are immune from authoritarianism’s allure.

Today, nearly a third of Americans who haven’t gone to college believe that having a “strong leader” is good for the country, compared to only about 13% of those with a bachelor’s degree.

Of course, much of that allure is based on fear—fear of change, fear of loss of advantage, fear of the other. Authoritarian leaders and wannabes exploit this fear by appealing to group identity and cohesion and by defining those who appear different as a threat. We should recognize that authoritarianism is not just imposed from above—at least, not at first. It is an individual worldview that everyone to a greater or lesser extent is susceptible to. Research on authoritarianism supports the idea that preferences for conformity and social cohesion are among the psychological tendencies that predispose people toward preferring strong hierarchical leadership styles. In other words, individuals who have a greater preference for group cohesion are more inclined to feel threatened by diversity, be intolerant of outsiders, and react by supporting authoritarian leaders.

With its preference for conformity, authoritarianism is a clear threat to liberal democracy and the diversity of expression, belief, and ways of living that it is designed to protect. But the same education system that prepares people for work can play a role in protecting our democratic way of life. Numerous studies going back decades and conducted throughout the world have shown that higher levels of education are inversely correlated with authoritarianism.

Today, nearly a third of Americans who haven’t gone to college believe that having a “strong leader” is good for the country, compared to only about 13% of those with a bachelor’s degree. Meanwhile, according to a 2017 Pew Research Center study, about a quarter of people with a high school diploma or less say “military rule would be a good way to govern our country.” Only 7% of college grads support that view.

People with higher levels of education are much less likely to be authoritarian in their child-rearing preferences than others. The shift toward raising children who themselves are more tolerant, independent, and inquisitive may be education’s most profound effect on society.

Why does education thwart authoritarian attitudes? At its best, higher education strives to promote independent thought and critical examination of established orthodoxy, not to mention inquisitiveness and curiosity. All this stands in stark contrast to the blind acceptance of information and opinion from authorities. Higher education also exposes people to diverse ideas and cultures, showing that differences are not as bad or as dangerous as people may have been conditioned to believe. Education helps people to better understand abstract principles of democracy and equality and how to deal with complexity and differences in society. Education also helps improve interpersonal communication skills—essential for civic participation in a democracy.

But perhaps the most powerful reason education is an antidote to authoritarianism lies even deeper. People with higher levels of education are much less likely to be authoritarian in their child-rearing preferences than others. The shift toward raising children who themselves are more tolerant, independent, and inquisitive may be education’s most profound effect on society.

Of course, formal learning cannot on its own change the equation, but absent well-informed citizens who can critically judge the ideas and perspectives of those who hold office, the consequences will be chilling. When the former president of the United States invents “facts” or tells outright lies, dismisses scientific evidence, and demonstrates a stunning ignorance of history, the consequences are real for those who have not developed their own critical-thinking capacities.

So, the greatest contribution of a better-educated population to shared prosperity is that educated citizens are the best defense against the threats to our democratic way of life. The debate about President Donald Trump’s and others’ perceived threats to democracy will linger, but for democracy to prosper in the long term, we need more people to reach higher levels of education.

This is an edited excerpt from Chapter 6 of Human Work in the Age of Smart Machines, by Jamie Merisotis.

From machines to animals, there are many kinds of possible minds.

Former Harvard professor and best-selling author Todd Rose explains the problem with prestigious colleges and how the future of higher ed could be bright.
▸
4 min
—
with
Todd Rose
The Past

Teaching science as a liberal art

Science cannot be isolated from culture.
Up Next
High Culture

What happens when simulation theory becomes more than a fascinating thought experiment?