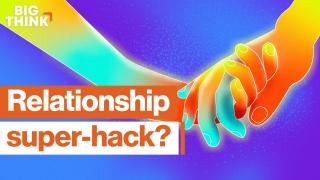 SARA ALGOE: When we get into a romantic relationship, it's all sparks, and flowers, and hikes, and coffees. But over time, the romantic couple gets into routines. And so what we've argued is that the moments of gratitude still matter, because when we say "thank you," we're sending a message to the person who just did something nice for us, that they are valued, that they're seen, that the thing that they did for us was worth doing in the first place.

NARRATOR: Thank you. We often take the power of it for granted, but it's fundamental to keeping your relationship healthy. And letting your partner know that you appreciate them can resonate throughout whole communities.

ALGOE: I'm Dr. Sara Algoe, and I study the emotions and social interactions that are at the heart of our very best relationships.

We do have really cool evidence from hundreds of video-recorded conversations where we had romantic couples in the lab. One person just picks something that their partner had done for them recently, and we had them express gratitude to their partner. Let me give you an example. There was a work party, and one partner remembered that her partner likes lemon bars and brought one home. That was the thing. It's a really little thing, but the way that he expressed gratitude for it, he said, "The fact that you remembered that, that you were thinking about me." And then he said, "It's not just this. You do this kind of thing for me and for other people all the time." So it's just about putting that extra little emphasis on what it was about their behavior that really stood out.

NARRATOR: Sara's research shows it's all about describing the specific thing about your partner that you're thankful for. That is what helps to drive closeness and affection. Her research also focuses on someone who witnesses this exchange of gratitude. When the witness sees that "thank you," they feel an increased sense of openness towards the person that said it, and that can lead to greater self-disclosure, which is a measurement of how vulnerable and honest someone is when talking about themselves.

NARRATOR: Sara's research showed this witness wanted to get to know the person being thanked, even though they never saw them. They had no idea who they were or what they look like, but because they had been thanked, they must be someone worth knowing. Expressions of gratitude make both the person being thanked and the person saying "thank you" more appealing. And that has ripple effects on everyone who witnesses this and the communities that surround them.

ALGOE: I will offer you my working definition of love, which is that it's an other-focused, positive feeling that really blurs the boundaries between the self and the other person. If you think about love as a state where you think of yourself as really merged with the other person, then it makes a lot more sense why you would be willing to sacrifice for the other person because they're kind of an extension of who you are. It's such a little gesture. It's not that hard to say "thank you" to someone, but that has the potential for helping that person establish better relationships. It has this potential for reverberating effects throughout your social network, connecting people within our communities in ways that I think are just starting to be understood.