A new study from the University of California, Davis, suggests that whatever you feel your ideal partner preference is doesn’t really reflect your personal insight and values.

According to lead author Jehan Sparks, a former UC Davis doctoral student, the participants in the study were very easily able to list their top three attributes in an ideal partner.

“We wanted to see whether those top three attributes really mattered for the person who listed them. As it turns out, they didn’t,” Sparks explains.

Brain in love: The science of attachment in relationships | Helen Fisher | Big Thinkwww.youtube.com

More than 700 participants selected their top three qualities in a romantic partner (things like funny, attractive, inquisitive, kind, etc). They then reported their romantic desire for a series of people they knew personally. Some were blind date partners, others were romantic partners and some were simply platonic friends.

While participants did experience more romantic desire to the extent that these personal connections of theirs (people they knew) had the qualities they listed, there was more to the study.

Paul Eastwick, co-author and professor in the UC Davis Department of Psychology explains: “You say you want these three attributes and you like the people who possess these attributes. But the story doesn’t end there.”

The participants also considered the extent to which their personal acquaintances possessed three attributes nominated by some other random person in the study. For example, if Kris listed “down-to-earth”, intelligent and thoughtful as her own top three attributes, Vanessa also experienced more desire for people with those specific traits. 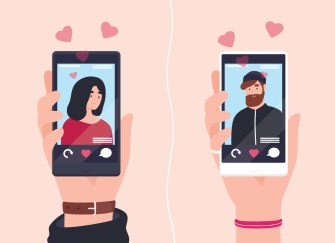 So the question became: are we really listing what we want in an ideal partner or are we just listing vague qualities that people typically consider as positive?

“So in the end, we want partners who have positive qualities,” Sparks explained, “but the qualities you specifically list do not actually have special predictive power for you.”

In other words, the idea that we find certain things attractive in a person does not mean we actively seek out people who have those qualities, despite saying it’s what we want in a love interest. The authors of this study suggest these findings could have implications for the way we approach online dating in the digital age.

This isn’t the first study of its kind to suggest that what we find in love isn’t really what we were looking for. The evidence suggests that we really are consistent in the abstract of it all: when asked to evaluate what you want on paper, you are more likely to suggest overall attractiveness in accordance with what you’ve stated are important ideals to you. But real life isn’t so similar.

According to Psychology Today, who covered a 2015 study with similar results, initial face-to-face encounters have very little effect on our romantic desire. “When we initially meet someone, our level of romantic interest in the person is independent of our standards.”

While you might have no immediate interest in John, he may fit your criteria of being kind, loyal, and intelligent. Similarly, someone may be attracted to Elaine even though she doesn’t have any of the qualities they originally said were important to them.

The authors of both the 2015 and 2020 studies say the same thing: give someone a chance before writing them off as a poor match. If your initial attraction is independent of the standards you’ve set out, the qualities which you’ve listed as important to you, the first time you meet someone may not give you enough information to make an informed decision.

“It’s really easy to spend time hunting around online for someone who seems to match your ideals,” said Sparks, “But our research suggests an alternative approach: Don’t be too picky ahead of time about whether a partner matches your ideals on paper. Or, even better, let your friends pick your dates for you.”