Many experts have weighed in on the significant mental and physical health benefits of sex:

Subspace is defined as a state of transcendence reached by submissives through intense physical or psychological experiences with their partner. This can happen through sensory triggers (the use of paddles, blindfolds, restraints) or through emotional triggers (certain words or phrases, meaningful expressions).

This space, while experienced differently for many, can be described as a nearly-hypnotic feeling that takes over when the submissive partner is highly engaged in their role.

While subspace can be described as a “hazy” or “blurry” trance-like state, domspace is often described (by individuals who experience it) as an intense, euphoric, and focused state of mind. 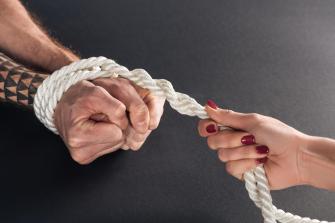 Transient hypofrontality, a term coined by Dr. Arne Dietrich, is when the focused, thought-processing part of the brain is “shut off” by external triggers. An example of this is the difference between engaging in a competitive sport and running in a beautiful park. During a competitive sport, your brain will need to make a variety of complex decisions. While you’re running a calmer path in a beautiful park, however, your mind can “let go” of that prefrontal engagement and you can experience an alternate (relaxed) state of consciousness. For a submissive, during BDSM scenes, this can result in reduced self-reported stress and increased sexual arousal.

According to the research, subspace is often characterized by the activation of the sympathetic nervous system, the release of epinephrine and endorphins, and a subsequent period of non-verbal, deep relaxation. This chain reaction can often lead the submissive in the scene to experience a temporary state of depersonalization and derealization (which are generally experienced as positive and pleasant in this context).

The key to experiencing this trance-like state is having a partner you trust, research suggests.

“Because the participant who identifies as the sadist, dominant [or top] in a given scene is generally charged with monitoring and protecting their partner, the [submissive] bottom in the scene might be better situated for achieving an altered state of consciousness and transcendence.” – Rethinking Kink, 2010

“Given the associations between ASCs and subspace described above, the authors’ findings on ASCs can be extended to the analogous experience of subspace. The study suggested that symbolic action can have a profound effect on psychological processes and connected trance (a type of ASC) with the healing properties of the trance state.”

Hoarders know their habits are abnormal, and yet they cannot help themselves. Maybe you can help them.
Up Next
The Past

10 pieces of wisdom from Roman emperors

Even tyrants and despots offer wisdom worth heeding.