While the Roman Empire lasted for roughly 300 years, the extended family of emperors took control of Europe for some time after. Thanks to a recent revival in Stoicism, the Romans of old are getting a new look—especially the premier Stoic, Marcus Aurelius.

These men were not all philosophy and peace, however. Many were brutal dictators. In fact, investigate the lineages of Roman leaders over the course of centuries and you’ll see few died in old age of natural causes. They were more likely to be murdered by family members or competing politicians.

Wisdom is everywhere, however. A number of the rulers below remained in power for 30 or 40 years. Some chose to be benevolent instead of bloodthirsty.

The 10 quotes below are wise because we can understand and apply them today. Many parallels to the fall of Rome have been applied to modern America, for good reason. As the historian Edward Gibbon phrased it in his late 18th-century masterpiece, “The Decline and Fall of the Roman Empire”: “The end comes when we no longer talk with ourselves. It is the end of genuine thinking and the beginning of the final loneliness.”

Let us turn the following thoughts over in our minds and weigh their value not for what they are, but, as Oswald Spengler wrote in “The Decline of the West,” for what they appear to be now: “What concerns us is not what the historical facts which appear at this or that time are, per se, but what they signify, what they point to, by appearing.”

The philosophy of Stoicism – Massimo Pigliucciwww.youtube.com

If you want a rainbow, you have to deal with the rain. — Augustus

Who knew that Dolly Parton took cues from the very first Roman Emperor, who began his culture’s run of global domination in 27 BCE? With wisdom like this, we can imagine how he inspired the Pax Romana. Eternal advice: You have to suffer life’s tragedies in order to know its glory. Those shiny colors are only revealed after the mud is cleaned off.

The object of life is not to be on the side of the majority, but to escape finding oneself in the ranks of the insane. — Marcus Aurelius

Being a rebel is common currency in the social media age, even if many modern rebellions are really signs of following a herd mentality. Marcus Aurelius was both Stoic and ruler, holding the seat of power from 161-180 CE. His wisdom fills books, yet this simple sentence says so much: don’t slip so far down your conspiracy thinking that you lose the rope to pull yourself back up.

Because of a few, disasters come upon a whole people, and because of the evil deeds of one, many have to taste their fruits. — Basil I

Was this written over the last four years? Or the last 40 in trickle-down America? Basil I, aka The Macedonian, ruled the Byzantine Empire from 867-886. Born a Macedonian peasant, Basil is an example of rags to riches, dropping truth bombs along the way: a simple reminder of the interconnectedness of societies.

What we wish, we readily believe, and what we ourselves think, we imagine others think also. — Julius Caesar

Officially, Caesar was not an emperor. He led the charge in dissolving the Roman Republic so that the Empire could begin, however. Caesar’s power move in becoming the first dictator perpetuo (dictator for life) inspires authoritarians around the world today; it also led to his assassination. Regardless, Caeser has been the subject of fascination for over two millennia, and though often viewed as a tyrant, he greatly expanded Rome’s territory and influence. Given the above quote, you can say he imagined himself as a world ruler — and really believed it.

This 16th-century Austrian ruler was at the tail end of Roman rule, yet his sentiment is perfectly timed for the social media age. We might enjoy universal time (and tech companies willing to supply digital clocks). We’re certainly no closer on a consensus about topics of religion, politics, and, during an age in which everyone has a voice, much anything else. 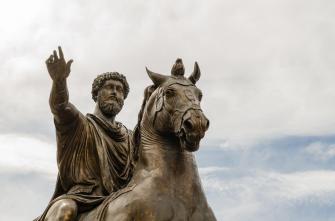 Say not always what you know, but always know what you say. — Claudius

The first Roman emperor born outside of Italy, the son of Nero was inflicted with a limp and slight deafness at an early age, making him a bit of an outcast. These events might have tuned him into a level of empathic intelligence, as displayed in this quote—one which should be required reading for anyone signing up for a Twitter account today.

Our great mistake is to try to exact from each person virtues which he does not possess, and to neglect the cultivation of those which he has. — Hadrian

As with many emperors, Hadrian’s rise to power and reign was filled with treachery and greed alongside vision and social reform. Well known for being a walking contradiction—compassionate one moment, murderous the next—Hadrian might have been doing a bit of self-reflection (or self-evasion) when speaking this quote. Either way, it’s a powerful reminder not only to stay in one’s lane but to own that lane completely.

Keep cool and you will command everyone. — Justinian I

Justinian the Great ruled over the Eastern Roman Empire from 527-565 CE. Known as the “Last Roman,” he rose from peasantry to power and tried to instill many social reforms. Perhaps the sentiment above was his own guide for navigating the treacherous world of politics. Sadly, cooler heads don’t seem to prevail in our current landscape. Maybe Justinian saw something we don’t.

Hidden talent counts for nothing. — Nero

Let your light shine, says the debaucherous and tyrannical fifth Roman emperor. Five years into his reign he had his overbearing mother killed. Perhaps his talents were all centered in his dictatorship? Regardless, we’d do well to heed these five words. If you have something to offer the world, don’t play small.

It is the duty of a good shepherd to shear his sheep, not to skin them. — Tiberius

The second Roman Emperor offers this timeless piece of advice: you need to prune plants to keep them from overgrowth, yet you can’t cut back too much. This call to level-headedness is yet another piece of wisdom needed in today’s social media climate. Hold people accountable for their actions while remembering the more you tear everything down, the harder it becomes to repair and rebuild.

Harmony and moderation make for a happier life.
Sponsored

With economic turmoil looming, everyone wants a way to keep their funds safe. But is that really possible?
Up Next
Strange Maps

Norway has highest share of women scientists and engineers in Europe

Despite overall increase over the past 20 years, share of women in science and engineering falls in some European countries